The Palestinians need to want to help themselves and understand that the normalization deal between the United Arab Emirates and Israel will aid their cause if they allowed it to, a senior Emirati diplomat told The Times of Israel ahead of the inking of the deal at a White House ceremony on Tuesday.

“They need to want to help themselves as well, and perhaps instead of using the traditional criticisms and curses, they actually look at what we are trying to do,” said Assistant Minister for Cultural and Public Diplomacy Omar Saif Ghobash in an interview.

The agreement “is going to help rather than hinder” the Palestinian cause, he argued.

Ghobash called on the Palestinian Authority to take the opportunity to return to the negotiating table with Israel, noting the Emirati demand that Israel suspend West Bank annexation in return for the deal.

“Using what we managed to achieve, we encourage the Palestinians to reach out to the Israelis and the US authorities and to rethink what might be possible,” he said.

According to Ghobash, the UAE has in recent years developed “new interests…apart from the traditional Arab-Islamic ones,” and it was those interests that led to the normalization deal.

“While we discovered that we have new interests, that doesn’t mean that we give up on our traditional loyalties,” he said. 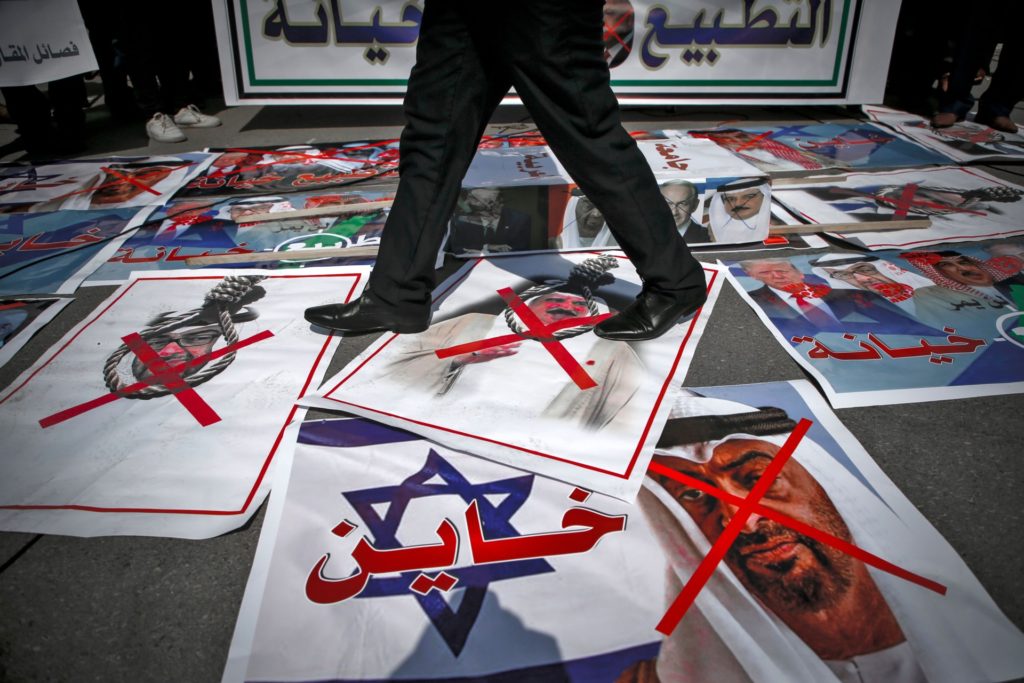 A demonstrator walks on pictures laid out on the ground depicting X-marks over the faces of Bahrain’s King Hamad bin Isa al-Khalifa and Abu Dhabi Crown Prince Sheikh Mohammed bin Zayed al-Nahyan (shown before an Israeli flag with the Arabic word “traitor” superimposed), during a protest against the United Arab Emirates’ and Bahrain’s decisions to normalise relations with Israel, in Gaza City on September 15, 2020. (MOHAMMED ABED/AFP via Getty Images)

The UAE’s nascent ties with Israel will allow it to fight for the Palestinian cause “by speak[ing directly] to our Israeli friends and partners about some of the issues that concern [us],” he said.

“We are not going to negotiate on their behalf, but we are saying that there is space [to move forward], and we believe that we have created that space [with this agreement],” he added.

Unlike peace deals Israel has struck with Egypt and Jordan, the pact with the UAE will result in a “warm peace,” Ghobash said.

“One of the key [ideas] we agreed to was that this would be a warm peace, and we expect there to be a lot of people-to-people interaction in a way that other forms of peace in the region haven’t been,” he said.

“There’s already been a lot of interest and curiosity about kosher food, about the Hebrew language, about the lifestyle and about what Israelis are really like,” he said.

“You know, a lot of Emiratis are watching ‘Fauda’… so an image is building up,” he said of the hit Israeli Netflix show. “A lot of young Emiratis have already told me they want to go to Tel Aviv and other places in Israel, and they’re really interested in interacting with their own age group.”