Soleimani died alongside Abu Mahdi al-Muhandis, the head of the Hezbollah Brigades, a PMF organization, on January 3, 2020. At the time of his death, he led the Quds Force, an elite wing of the Iranian Islamic Revolutionary Guard Corps (IRGC), a U.S.-designated terrorist organization. American officials held him responsible for hundreds of American casualties, particularly in Iraq.

The PMF consists of mostly Shiite militias with ties to Iran, several of them designated terrorist organizations by the United States. The Iraqi government formalized them as a wing of the Iraqi armed forces in March 2018, in recognition of their participation in the fight against the Sunni Islamic State terrorist organizations.

As a result, the PMF wield significant power in non-Kurdish parts of Iraq, enough to override Chinese coronavirus restrictions limiting the size of mass events. 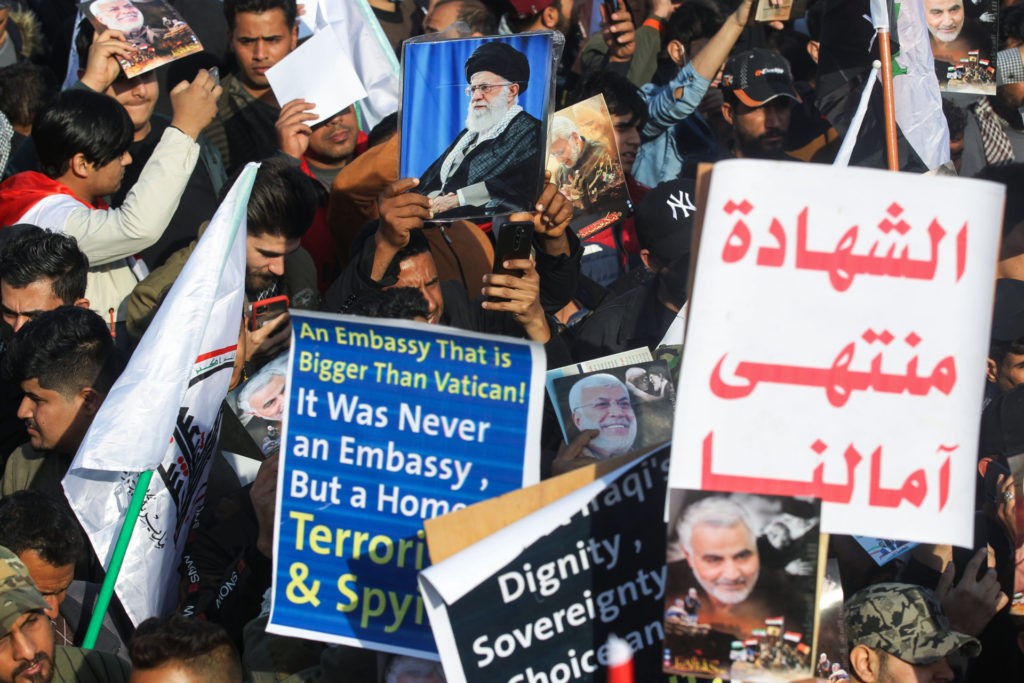 Iraqi demonstrators lift a placard which reads “martyrdom is our utmost dream” and portraits of Iraqi commander Abu Mahdi al-Muhandis (C), Iranian Revolutionary Guards commander Qasem Soleimani (bottom), and Iran’s Supreme Leader Ayatollah Ali Khamenei (top) during a rally marking one year since the killing of the two commanders in a US drone strike, in Tahrir square in the capital Baghdad on January 3, 2021. (AHMAD AL-RUBAYE/AFP via Getty Images)

Prior to the “million person march,” Iraqi officials had banned all gatherings on New Year’s Eve and recently shut down travel into Iraq from eight nations with high levels of coronavirus cases, including Iran. Restaurants and other “social” businesses cannot currently operate due to a two-week lockdown that began on December 24.

Iraq has documented nearly 600,000 Chinese coronavirus cases at press time and 12,844 deaths, though the real case and death tolls may be much higher, as much of Iraq remains without critical infrastructure in the aftermath of the Islamic State occupation. The Iraqi government fined the international news organization Reuters in April for reporting on the discrepancy between reported and real cases in the country.

Those in the crowd chanted anti-American slogans, waved PMF militia flags, and held portraits of Soleimani and al-Muhandis. PMF leaders delivered speeches condemning America and calling for the full withdrawal of American troops from the country. Some protesters chanted slogans or held signs referring to America as the “great Satan,” the Iranian Islamic regime’s preferred term for the country. Others also protested against the Iraqi government for allowing a continued American presence on Iraqi soil.

Happening now: Thousands of Iraqis gather in #Baghdad's Tahrir Square on the anniversary of the assassination of #Iran's General Qasem Soleimani and #Iraq's militia commander Abu Mahdi al-Muhandis, killed a year ago by a #US drone strike. pic.twitter.com/x6v3TIwuAo

The leader of Asaib Ahl-al Haq, a U.S.-designated terrorist organization that belongs to the PMF, openly urged the crowds to be as large as possible, despite coronavirus social distancing measures in effect.

In support of the man of the age and time, love for Iraq, and loyalty to the blood of the martyrs, we invite every honorable citizen of this country to participate in the demonstration of Days of Martyrdom and Sovereignty on Sunday in Tahrir Square,” Qais al-Khazali wrote on Twitter, according to Iran’s PressTV.

Among the many jihadists to issue statements honoring Soleimani on the anniversary of his elimination from the battlefield was the head of the Lebanese-Iranian terrorist group Hezbollah, Hassan Nasrallah.

“One of the main outcomes of the assassination of General Suleimani and [deputy commander of Iraq’s Popular Mobilization Units Abu Mahdi] al-Muhandis is the calls made for the expulsion of U.S. forces from the region,” Hassan Nasrallah said in a speech from Beirut. “When you assassinate our leaders, we get more determined and strong-minded to assert our rights.”

The observance in Iraq differed significantly from reporting from Iran, where the government organized socially distanced commemorations. In Qom, the city to first experience a major Chinese coronavirus outbreak in Iran, supporters of Soleimani held a “drive-in ceremony” to honor his memory, according to the state-run Fars News Agency.

Iranian officials observed the anniversary with the threat of legal repercussions for President Donald Trump, who ordered the airstrike against Soleimani. Senior Iranian parliament aid Hossein Amir Abdollahian said last week that Tehran sought to prosecute Trump and all others involved in the airstrike, including any individual in Iraq who shared intelligence regarding Soleimani’s whereabouts, facilitating the strike. As Trump has not announced any immediate plans to travel to Iran, and Iran and the United States do not have any extradition policies, it is unlikely that Trump will see the inside of an Iranian court over the matter. 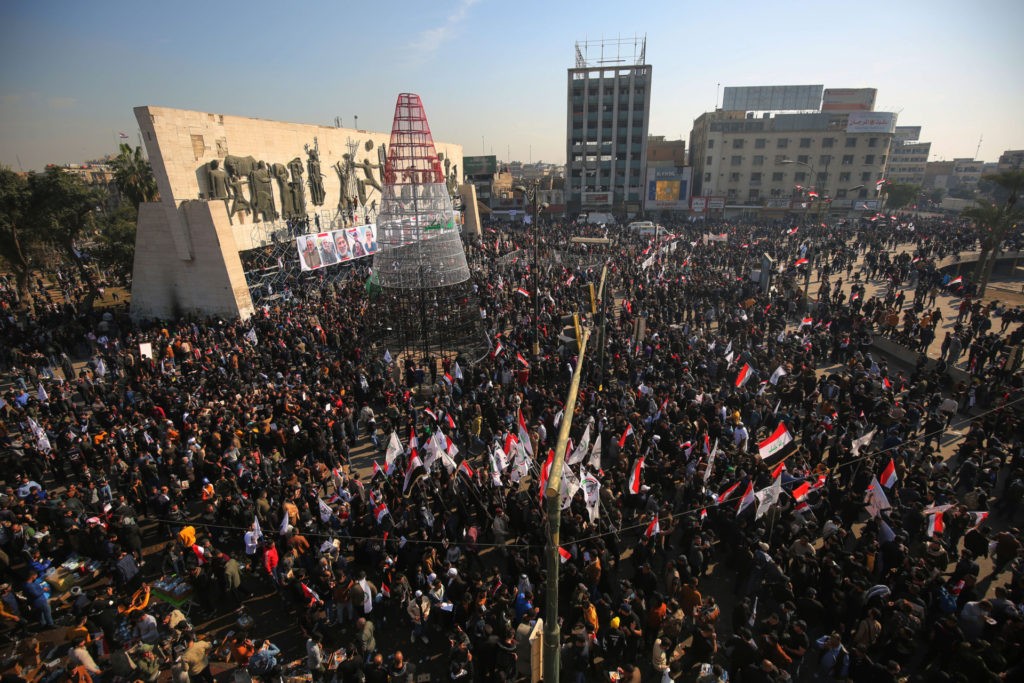 Iraqi demonstrators lift flags and placards as they rally in Tahrir square in the capital Baghdad on January 3, 2021, to mark one year after a US drone strike killed Iran’s revered commander Qasem Soleimani and his Iraqi lieutenant Abu Mahdi al-Muhandis near the capital. (AHMAD AL-RUBAYE/AFP via Getty Images)

As head of the Quds Force, Soleimani was the main point of contact between Iran and international allies like the PMF, Hezbollah, and socialist Venezuela.

American officials believe he was in charge of much of Iran’s military foreign policy and responsible for implementing the widespread use of improvised explosive devices (IEDs) in Iraq to injure and kill Americans.

“Soleimani was the Iranian Regime’s most ruthless butcher, a monster who murdered or wounded thousands of American service members in Iraq,” President Donald Trump said during his 2020 State of the Union address. “As the world’s top terrorist, Soleimani orchestrated the deaths of countless men, women, and children. He directed the December assault on United States Forces in Iraq, and was actively planning new attacks.”