Israel has administered more coronavirus vaccines to its population — more than one in nine Israelis have received the first dose — than any other country in the world by a large margin, and here’s why.

“I am asked all over the world how Israel does it,” said Health Minister Yuli Edelstein on Sunday, shortly after the millionth Israeli received a vaccine. “The reasons are that we were prepared on time, signed on time with the leading companies, and convinced them that if they gave us the vaccine, the health funds would know how to administer it in a very short time. That is exactly what is happening.”

The Jerusalem Post on Monday listed a host of reasons for the vaccine drive’s stunning success:

The newspaper cited Dr. Dorit Nitzan, director of emergencies for the World Health Organization, as saying that the pandemic proved that universal healthcare was key to managing the health crisis.

It also quoted Ran Balicer, chief innovation officer for the HMO Clalit Health Services and chairman of the National Expert Advisory Panel to the Government on COVID-19, as echoing the sentiment.

“The system revolves around the intimate connection from cradle to grave between citizens and their healthcare provider,” Balicer said.

“We are like sprinters,” said Arnon Afek, deputy director-general of Sheba Medical Center in Tel Hashomer. “Israel knows how to mobilize.”

Afek pointed to the aftermath of a 2010 earthquake that devastated Haiti, when Israeli rescue teams were on the ground within 48 hours — even before U.S. aid arrived — and already operating a sophisticated field hospita.

“We have become used to working in a state of emergency,” Balicer said. “Our four health funds have been used to moving quickly, instantaneously gearing up for emergencies and providing complex reassignments of a lot of personnel.

While trust in the political echelons may be at an all time low, the same cannot be said of health funds, with 90 percent of Israelis saying they are satisfied with their health provider.

“This tells you something about the level of trust and infrastructure built over the years,” Balicer said.

4. A focus on preventative care

HMOs also put special emphasis on clients taking care of themselves year-round and there are also much lower cases of undiagnosed or untreated chronic illnesses than in other Western countries – which has been suggested as one of the reasons that the coronavirus mortality rate in Israel was lower, the report said.

Health providers also receive funding according to an age-adjusted per capita amount as opposed to according to services provided. They use big data and complicated algorithms to predict what imperils different populations and are therefore able to focus on preventative care.

HMOs employ a lot of workers and they exist in every single neighborhood. 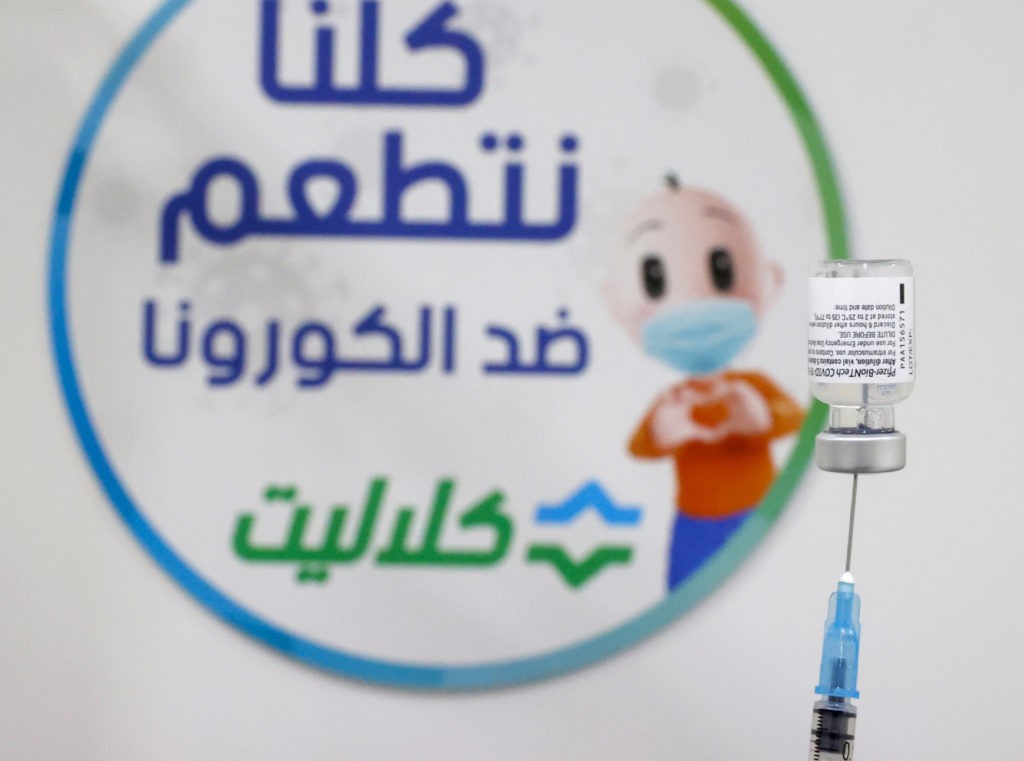 A healthcare worker prepare a dose of the COVID-19 vaccine at Clalit Health Services, in the northern Arab Israeli city of Umm al Fahm , on January 4, 2021. Israel said Sunday two million people will have received a two-dose Covid-19 vaccination by the end of January, a pace Prime Minister Benjamin Netanyahu boasts is the world’s fastest. Health Ministry Director General Hezi Levy said that because of the enthusiastic takeup, Israel would be easing the speed of vaccination to eke out stocks. (JACK GUEZ/AFP via Getty Images)

The annual flu vaccination and other vaccinations meant that the infrastructure was already in place.

“Making appointments for vaccination, to inform you or remind you that you have an appointment tomorrow, to understand why you did not come, to set up the second appointment for the second dose during the first interaction – we make it look very simple,” Ido Hadari, Maccabi Healthcare Services’ director of communications and government, said.

He added that the whole process is fine-tuned down to the last minutiae, for example, creating appointments with 7-minute gaps because it takes seven minutes to inoculate a single individual.

For the coronavirus drive, the HMOs added an extra layer of erecting separate vaccination centers for sick people and healthy people.

“In regular years, we give the flu vaccination in the clinic,” he said. “But this winter, with coronavirus, we started giving flu vaccinations outside most of them in the same compounds we are now using for COVID.”

7. Not wasting a single dose

Since the vaccine drive began a little over two weeks ago, there have been countless stories emerging all over the country of nurses rushing out into the street and urging a random pizza delivery person or another passerby to come in and get vaccinated, saving an open vial from otherwise being destroyed.

Each vial of the Pfizer vaccine contains five to six doses, and if a bottle was opened towards the end of the day, health workers will do their utmost to administer it. Two weeks on and vaccine clinics are full of people waiting for leftover shots at the end of every day.

As a result, Israel has had less than 0.1% of its doses requiring disposal.

The Health Ministry receives computerized, anonymous records from the HMOs to track the vaccine campaign’s progress and any other information pertinent to its success, including side effects.

“Israel has a technical edge,” Afek told the Post.

The Health Ministry, HMOs and hospitals ran a massive, coordinated public relations campaign urging people to get the vaccine on TV, radio and in newspapers.

“We took the time to explain the scientific evidence,” Balicer said.

According to Fishman-Magen, “Before the campaign began, we had only around 40% of the population saying they would vaccinate, and other percentages said maybe or they were not interested. Now, we see that everyone is interested, and we have to prioritize.”

Some HMOs also encouraged clients to post selfies of themselves getting the shot and posting it to social media.

10. The spirit of the People of Israel

But in the end, it comes down to the people, said Afek.

Israel is a nation of early adopters. The population also pulls together in times of crisis.

Health care workers volunteered to work many extra hours to ensure people were vaccinated, he said, while the general public is also to be credited for Israel’s success.

“You can have all the staff ready and trained and the supply available, but if the public does not cooperate, it cannot be done,” Hadari said.

“We really, really feel the public was waiting for this vacation like a hope that is coming true,” he added.