ROME — Pope Francis sent a telegram to the citizens of Iraq expressing his sorrow over the Islamic State’s deadly suicide bombing in Baghdad Tuesday that took the lives of dozens of people.

“His holiness Pope Francis was deeply saddened to learn of the loss of life in the explosion at the Al-Wuhailat market in Baghdad and he sends condolences to the families and friends of those who have died,” reads the telegram that Vatican Secretary of State Cardinal Pietro Parolin sent late Tuesday in the pope’s name.

“Entrusting their souls to the mercy of almighty God, his holiness renews his fervent prayers that no act of violence will diminish the efforts of those who strive to promote reconciliation and peace in Iraq,” the text concludes.

The Islamic State terror group claimed responsibility for Tuesday’s attack, which claimed the lives of at least 36 people and wounded another 60. The suicide bomber detonated his vest in a market in the northern Sadr City area of Baghdad as shoppers were purchasing what they needed for the Muslim festival of Eid al-Adha.

This was the deadliest such attack in Baghdad in the past six months. Last January twin suicide bombers from the Islamic State blew themselves up in Tayaran Square, in the center of Baghdad, killing at least 32 and leaving scores injured.

The bombs exploded at a second-hand clothing market in the square, as they were pursued by security forces. The second bomber reportedly detonated his vest after people gathered around those dead and wounded from the first explosion.

Pope Francis visited Iraq in March of this year. 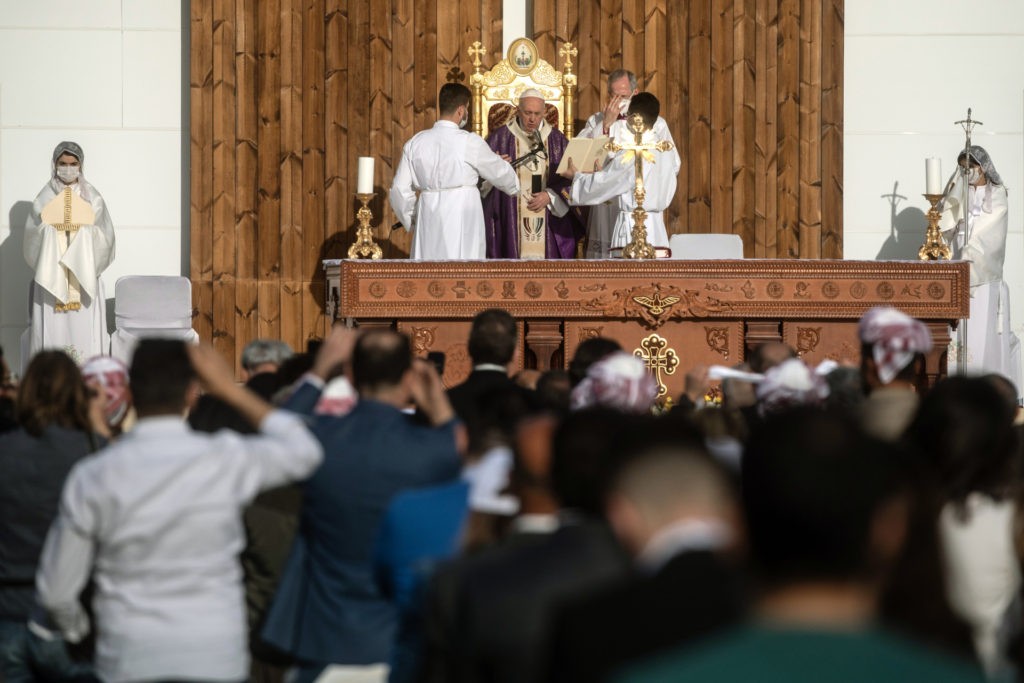 Pope Francis conducts mass at the Franso Hariri Stadium on March 07, 2021 in Erbil, Iraq. Pope Francis arrived in Erbil, the final stop of his historic four-day visit, the first-ever papal visit to Iraq. He visited Baghdad, Najaf, Erbil, and the cities of Qaraqosh and Mosul, which were heavily destroyed by ISIS. (Chris McGrath/Getty Images)

Prior to his trip, he sent a video message saying: “I come as a pilgrim, as a penitent pilgrim to implore forgiveness and reconciliation from the Lord after years of war and terrorism, to ask God for the consolation of hearts and the healing of wounds.”

“An unidentified person threw a grenade at a group of visitors who were on foot to the Al-Kadhimiya area in Baghdad to commemorate the death of Imam Musa Al-Kadhim,” a police captain told Anadolu News Agency at the time.