DUBAI, United Arab Emirates (AP) — Iranians are suffering through yet another surge in the coronavirus pandemic — their country’s worst yet — and anger is growing at images of vaccinated Westerners without face masks on the internet or on TV while they remain unable to get the shots.

Iran, like much of the world, remains far behind countries like the United States in vaccinating its public, with only 3 million of its more than 80 million people having received both vaccine doses. But while some countries face poverty or other challenges in obtaining vaccines, Iran has brought some of the problems on itself.

After Iran’s Supreme Leader Ayatollah Ali Khamenei refused to accept vaccine donations from Western countries, the Islamic Republic has sought to make the shots domestically, though that process lags far behind other nations.

The supply of non-Western shots remains low, creating a black market offering Moderna and Pfizer-BioNTech shots for as much as $1,350 in a country where the currency, the Iranian rial, is on the verge of collapse. Meanwhile, U.S. sanctions imposed on Iran mean the cash-strapped government has limited funds to purchase vaccines abroad. 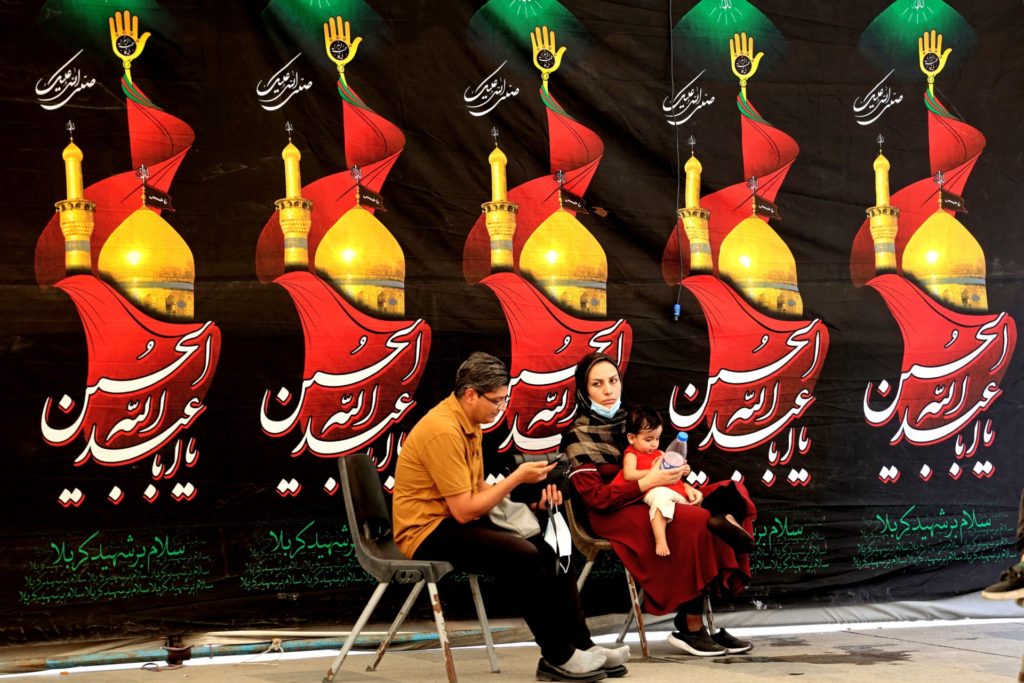 An Iranian family sits in front of a religious banner on the first day of of Muharram in the capital Tehran on August 10, 2021. Shiite Muslims over the world observe Muharram, the first Islamic month of the lunar calendar, to mark the seventh-century slaying of Prophet Mohammed’s grandson Imam Hussein in Karbala. (ATTA KENARE/AFP via Getty Images)

And even as the delta variant wreaks havoc, filling the country’s already overwhelmed hospitals, many Iranians have given up on wearing masks and staying at home.

The need to earn a living trumps the luxury of social distancing.

“What is next? A sixth wave? A seventh wave? When is it going to end?” asked Reza Ghasemi, a 27-year-old delivery man without a face mask, smoking a cigarette next to his motorbike on a recent day in Tehran. “It is not clear when this situation will change to a better one.”

Since the start of the pandemic, Iran has recorded nearly 4 million COVID-19 cases and more than 91,000 deaths — the highest numbers across the Middle East.

The true count is believed to be much higher. In April 2020, Iran’s parliament warned its case number was “eight to 10 times” higher than the reported figures, due to undercounting. While coronavirus testing capacity has surged since then, officials repeatedly have suggested the case count remains far off. The death toll is likely three times higher, officials say, as Iran only counts those who die in a hospital while being treated for coronavirus.

Khamenei in January slammed shut any possibility of American or British vaccines entering the country, calling them “forbidden.”

”I really do not trust,” them, Khamenei said of those nations. “Sometimes they want to test” their vaccines on other countries.

The decision, after Khamenei earlier floated conspiracy theories about the virus’ origin in March 2020, saw Iran turn inward and try to develop its own vaccines. Those efforts, relying on traditional “dead virus” vaccines rather than the Pfizer and Moderna method of targeting the coronavirus’ spike protein using RNA, have yet to reach mass production. And while the government claims local shots are 85% effective, they’ve released no data from their trials. 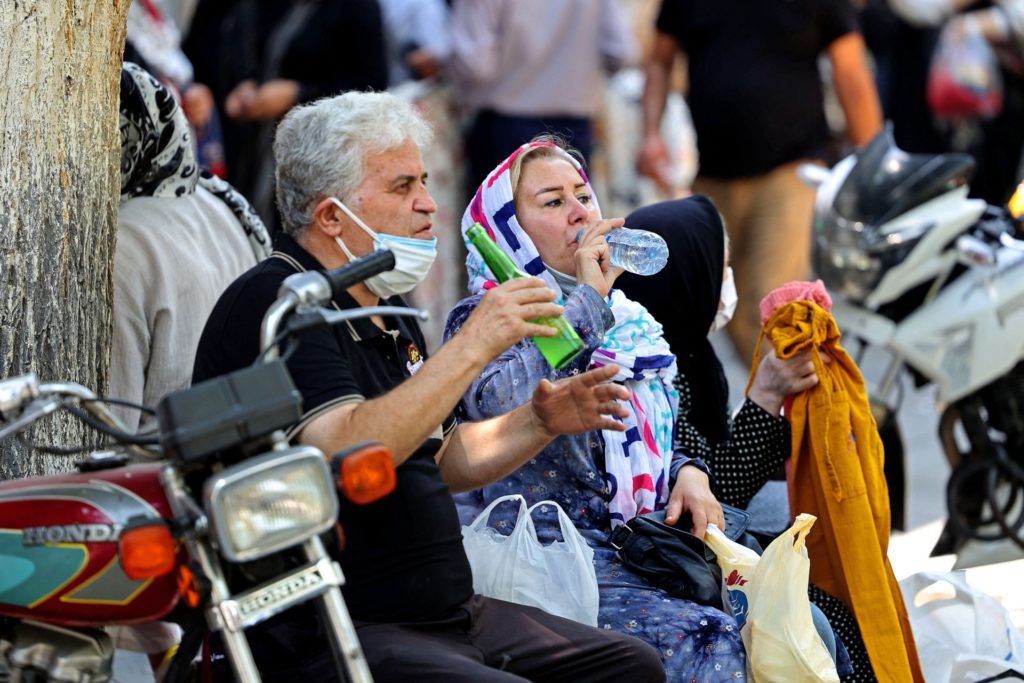 For now, the majority of Iranians receiving vaccines rely on foreign-made shots. A health ministry spokesman clarified on Tuesday that Iran could import Western vaccines “as long as they’re not produced in the U.S. or Britain.”

Doctors received the first set of vaccines, while the government now offers shots to those 50 and older, as well as to taxi drivers, journalists and those with diabetes. But it hasn’t been nearly enough to keep up with demand. Only 4% of the Iranian public are fully vaccinated, according to government statistics.

Those with residency permits have sought shots in the United Arab Emirates. Others have gone to Armenia where authorities offer free shots to visiting foreigners. In Tehran, word-of-mouth claims that Pfizer and Moderna shots smuggled in over the border from Irbil, Iraq, including the ultra-cold freezers needed for them, are now for sale in the Iranian capital.

A two-dose Moderna or AstraZeneca vaccine goes for $390, while two Pfizer shots cost $1,350. Those paying go on faith that the products have not expired — or are even legitimate vaccines.

Mahsa, a 31-year-old woman in Tehran, said she got the Moderna vaccine through her boyfriend’s friend, a doctor working at a pharmacy.

“I am sure the vaccine is genuine because I trust the doctor,” she said.

Amirali, a 39-year-old father of a baby girl, said he bought shots of the Japanese-made AstraZeneca vaccine from an Iranian doctor secretly vaccinating people for profit. Amirali said he took the chance as his wife, a permanent U.S. resident, received the Pfizer vaccine while visiting America.

“I was not sure when the government will provide vaccines for my age group, so I decided to vaccinate myself,” he said.

Both Amirali and Mahsa spoke on condition that only their first names be used for fear of retribution from the authorities.

But for those who can’t pay, there are no shots yet. 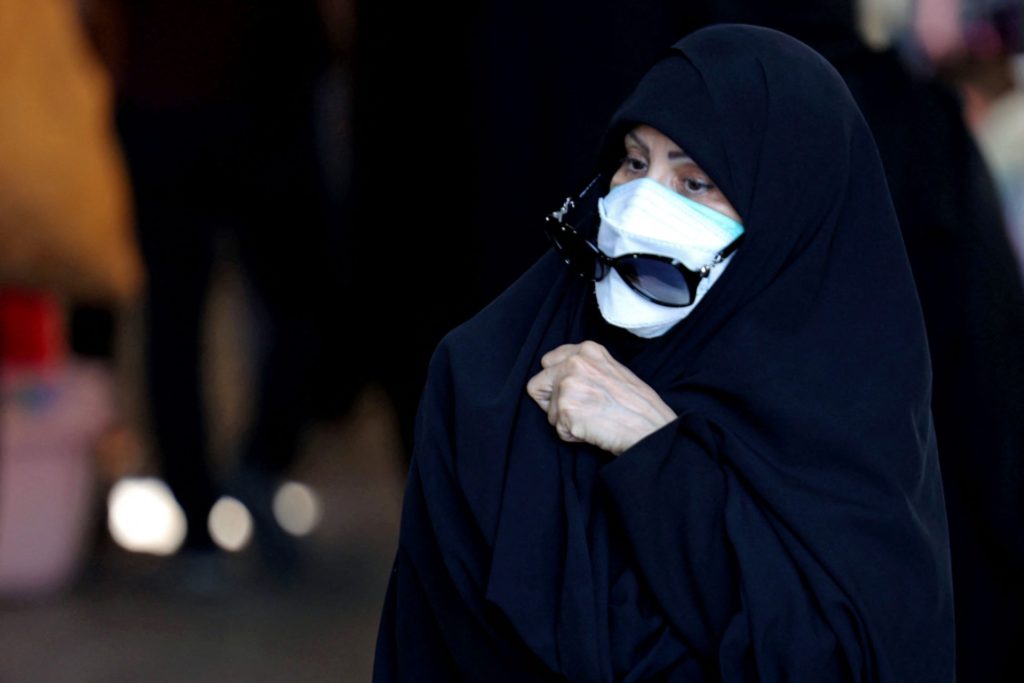 An Iranian shops at the Grand Bazaar of Iran’s capital Tehran on August 10, 2021. (ATTA KENARE/AFP via Getty Images)

Iran’s civilian government, now undergoing a transition of power to hard-line President Ebrahim Raisi, has been overwhelmed by the crisis. And with the Islamic Republic also facing protests over economic issues, water shortages and blackouts, the government likely wants to avoid triggering wider unrest.

“They want us to accept any situation simply because they failed to do their duty with vaccinations,” said Abbas Zarei, who sells mobile phone accessories in northern Tehran. “From time to time, they announce that businesses should close because of corona restrictions though it damages our lives.”

“It is not fair,” said Zarei, who like many in Iran, struggles to make a living. “I do not care about the restrictions anymore.”