Major General Hossein Salami, commander of Iran’s Islamic Revolution Guard Corps (IRGC), on Tuesday again boasted the demise of Israel is fast approaching, adding it is “not a wish anymore, but a reality that will come true in the near future.”

He gave no precise timeline to back up the extravagant claim he has made many, many times before, but warned this time he really means it.

He spoke after meetings with the leaders of Hamas and Islamic Jihad respectively.

The semi-official Iran outlet Tasnim reports Salami spoke with the Palestinian terrorist leaders who have visited Tehran following a “major, extraordinary and wonderful triumph” against “the Zionist enemy.” 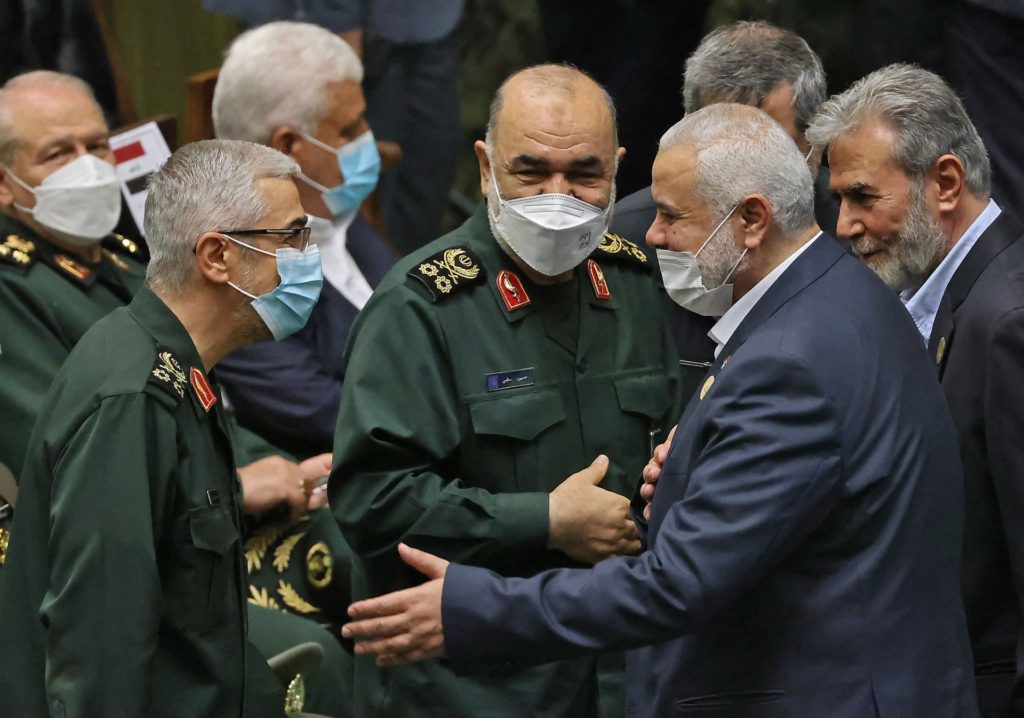 The leader of Palestinian Hamas, Ismail Haniyeh (2nd R), shakes hands with Iranian Chief of Staff for the Armed Forces Mohammad Bagheri (L) and the commander of Iran’s Revolutionary Guard force, General Hossein Salami (C), during the swearing in ceremony for Iran’s new president at the parliament in the Islamic republic’s capital Tehran on August 5, 2021. ( ATTA KENARE/AFP via Getty)

“Considering the undeniable realities on the ground, we are confident that the decline and collapse of the Zionist regime is beyond a wish and is a reality that could happen in the near future,” Salami said.

Tuesday’s boast of the end of Israel is not the first time Salami has made the same prediction.

As Breitbart News reported, in May he said Israeli society is “breaking apart at the seams” as it faced the manly disposition of Iranian forces.

“The Zionist system is breaking apart, faltering, and crumbling from within. Over the past year and a half, they tried to project a powerful image of themselves, namely inflate themselves like a balloon,” a clearly excited Salami said.

“Israeli regime’s destruction may take only one operation.”

The general then turned his sights on the U.S.’s security presence in the Middle East, saying it has been “weakened…. Any foreign extra-regional force in the region is viewed as a foreign body here and has to leave the region sooner or later.”

Iran General Hossein Salami said he seeks revenge against the U.S. that "will be hard, firm, regrettable, decisive and complete." https://t.co/9xWXPX0JEW

He also issued a warning to foreign adversaries.

“Our enemies are facing a decline in power, and with each passing day, the slope of this decline is accelerating,” Salami said, “but the enemy’s threats still remain.”

Previous to that declaration he warned the United States is “collapsing” and “Washington’s fake image of being a superpower” is being dissolved.

“By the grace of God, we are witnessing the rapid decline of our enemies, especially the United States,” Salami said during a military ceremony in Tehran, as reported by local MEHR news agency.