Biden arrived in Israel on Wednesday and is scheduled to travel to Saudi Arabia on Friday for meetings with de facto ruler Crown Prince Mohammed bin Salman (MBS). The visit has baffled some observers who note that, as a presidential candidate, Biden vowed to turn Saudi Arabia into a “pariah” in response to the killing and butchering of Islamist journalist Jamal Khashoggi, executed by Saudi government agents in Turkey.

Democrats have largely stopped condemning Riyadh over the Khashoggi affair and Biden has attempted to argue that the escalation of the Russian invasion of Ukraine – which began in 2014 but extended into Kyiv in February – makes it necessary for America to enhance its diplomatic relationship with Saudi Arabia and other Gulf states.

The war in Ukraine has prompted Western states to call for boycotting Russian oil and gas and elevated global oil prices. In the United States, however, gasoline and diesel prices skyrocketing is closely connected to Biden’s promise to “end fossil fuels” and limits placed on domestic production. Biden administration officials have celebrated the high gas prices as “accelerating our progress toward clean energy.”

In addition to visiting Saudi Arabia, Biden’s plan to lower gas prices has included berating individual gas stations in an attempt to convince them to sell gasoline under market price.

The Global Times cited experts expressing amusement at Biden attempting to court Gulf states while trying to revive Obama-era friendly policies towards Iran, Saudi Arabia’s most prominent antagonist and a persistent threat to the security of the region.

Biden, Leader of the Free World: "What am I Doing Now?" pic.twitter.com/Qn2t9XE2rc

“The dilemma for the US is whether to remove sanctions against Iran and let Tehran release more oil supplies but risk offending traditional allies like Israel and Saudi Arabia, or to build an anti-Iran alliance, but suffer from the pain of the energy crisis,” the Chinese government mouthpiece asserted on Wednesday, paraphrasing a Chinese “expert” named “Cui” (the outlet did not provide a full name).

Another expert identified as research fellow Yin Gang of the Chinese Academy of Social Sciences described Biden’s Mideast trip as the president going “cap in hand to OPEC members, mainly the Gulf countries,” asking for a greater oil supply to bring down prices. Yin predicted that Biden would also attempt to reduce sanctions on Iran, the world’s most prominent state sponsor of terrorism and a close ally of both Russia and China, to add more oil to global markets.

Biden told reporters in June that he had no interest in asking Saudi Arabia to produce more oil.

“No, I’m not going to ask them,” Biden said at the time. “I hope we see them, in their own interest, concluding that makes sense to do.”

The message did little to convince foreign policy observers that Biden was traveling to Saudi Arabia explicitly to request more oil production. As recently as this Tuesday, reporters at Bloomberg asserted, “for Biden, the biggest goal of the trip is convincing Persian Gulf countries – led by the Saudis – to increase oil production in a bid to combat prices at the pump.”

National Security Adviser Jake Sullivan explicitly stated that Biden would ask the Saudis to produce more oil in a press conference this week. 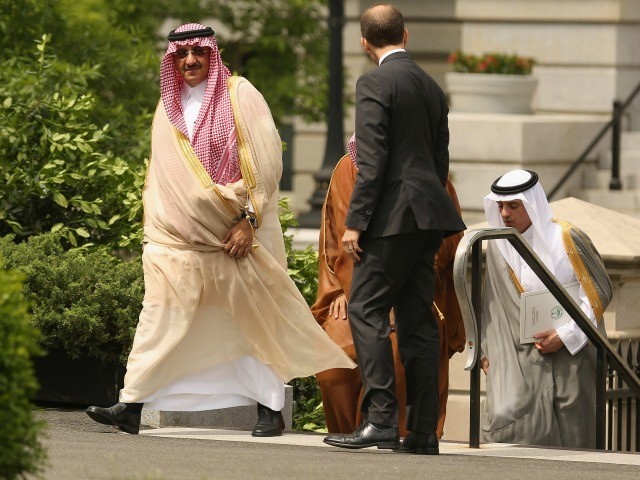 “We will convey our general view … that we believe that there needs to be adequate supply in the global market to protect the global economy and to protect the American consumer at the pump,” Sullivan said, according to Reuters.

The Global Times predicted that the Saudi government would leverage Biden’s poor position “to bargain for something else,” such as moving beyond the Khashoggi condemnations or more weapons sales.

Reuters reported this week that Biden is indeed considering revamping sales of offensive weapons to the country. Biden has made opposing Saudi Arabia’s role in the Yemen civil war a priority, including ending offensive weapons sales common under President Donald Trump. One of Biden’s first moves upon becoming president in January 2021 was to remove the Houthi jihadist group – an Iran-backed terrorist organization whose slogan is “God Is Great, Death to America, Death to Israel, a Curse on the Jews, Victory to Islam” – from America’s formal list of foreign terrorist organizations.

The Biden administration insisted that doing so would allow humanitarian aid into Houthi-controlled areas of Yemen, an assurance that has yet to bear fruit. As recently as last month, human rights groups published evidence of Houthi terrorists using child soldiers and committing other atrocities against Yemeni civilians. The Houthis have also escalated their attacks within Saudi Arabia, including bombing oil facilities, which Riyadh identified as a direct threat to the world’s oil supply.