One-third of small businesses are raising wages in the tight economy, setting a record level of pay increases, says a new report by the National Federation of Independent Business.

“A seasonally adjusted net 35 percent of small business owners reported increases in labor compensation as owners try to attract needed employees and retain those already on board,” said a press statement from the business group.

“This month’s jobs report demonstrates that small business owners’ optimism is showing no signs of abating,” said a statement from Juanita Duggan, president and CEO of the NFIB. She continued:

They are increasing compensation at record levels and are continuing to hire. Post tax-reform, concerns about taxes and regulations are taking a backseat to their worries over filling open positions and finding qualified candidates.

The report adds to growing evidence that smaller businesses outside the Fortune 500 are being pressured to raise wages for hourly workers and blue-collar workers by President Donald Trump’s high-pressure, low-immigration economic policy. Those wage rises are likely to boost the GOP’s score in the November elections — unless the GOP stops the wage rise by passing an amnesty bill.

The pressure is also pushing three out of four employers to offer wages of $11 or more:

A result of this is that 74 percent plan to pay an hourly wage of at least $11, compared to last year when only 53 percent of employers planned to pay the same or more.

The report also noted that more employers are using the federal E-Verify system to screen illegal immigrants from jobs. The survey said that “nearly 40 percent of employers plan to use E-Verify to evaluate summer applicants, up from 25 percent last year.”

The NFIB’s monthly wage chart shows a sharp, four-month rise in project wage increases by NFIB members since Spring, amid a growing economy and following passage of the tax cut bill: 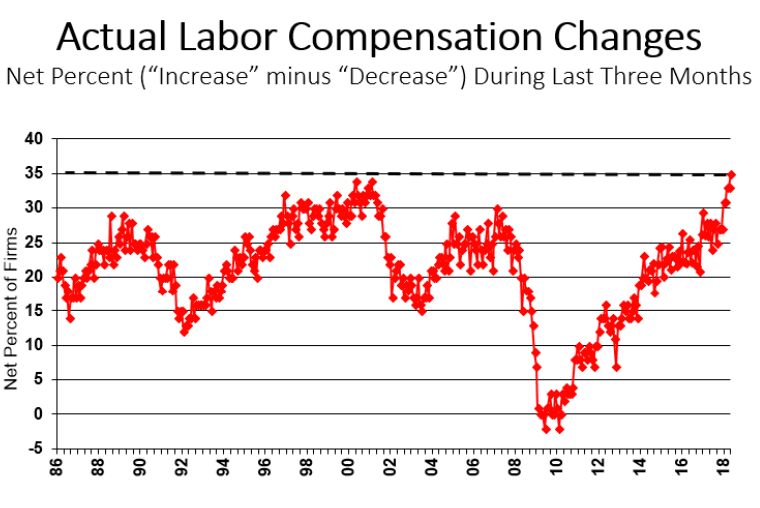 The shortage of trained, reliable workers is a major cause of the rising wages, especially because businesses are beginning to poach workers from each other with offers of higher wages.

According to the NFIB:

While near record high levels of owners are hiring or trying to hire, 83 percent of respondents reported few or no qualified applicants for the positions they were trying to fill. Twenty-three percent of owners cited the difficulty of finding qualified workers as their Single Most Important Business Problem (up one point), the highest reading since 2000, and one point below the all-time survey high.

Thirty-three percent of all owners reported job openings they could not fill in the current period, down two points but historically very high. Twelve percent reported using temporary workers, unchanged.

Nationally, rising pressure for wages is causing investors and CEOs to escalate their demands for Congress to provide them with a huge new wave of foreign workers, either via a DACA amnesty or extra guest workers, such H-2B workers. The NFIB statement also included a plea for more workers:

“While the small business economy is showing tremendous growth, difficulty finding qualified workers continues to be a notable issue,” said NFIB Chief Economist Bill Dunkelberg. “Temporary workers are filling some of these vacancies, but an increased availability of qualified workers would lead to more growth in employment.”

However, millions of Americans have fallen out of the workforce since 2001 and 2008. Employers are reluctant to pull these workers back into the jobs, partly because they are often ill-trained and sometimes drug addicted or have criminal records. That reluctance is being overcome by the threat of rising wages.

Business demands for more workers have turned into threats by donors and by threats GOP members who are elected in low-tech dairy districts. But many polls show the public overwhelmingly prefer immigration policies which bar companies from importing cheap foreign workers until Americans can get good jobs.

So far, Trump has continued to demand large-scale immigration reforms and has resisted industry’s demands, aside from agreeing to 15,000 extra H-2B workers for seasonal business.

Trump’s efforts to limit legal and illegal immigration is driving up wages and salaries for Americans in various locations and careers around the country. The beneficiaries include African-American bakers in Chicago, Latino restaurant workers in Monterey, Calif., disabled people in Missouri, high schoolers,  resort workers in Hilton Head, construction workers, Superbowl workers, the garment industry, and workers at small businesses, and even Warren Buffett’s railroad workers.