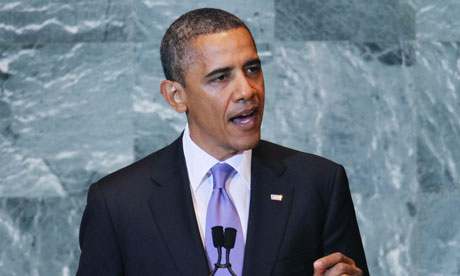 President Obama addressed the United Nations General Assembly on Wednesday, September 21. After pleasantries, Obama’s 5,183 word speech began with the customary nod to the UN’s mission “the pursuit of peace in an imperfect world.”

The President cited Franklin Roosevelt as the main driver behind creating the UN, but quickly veered hyperbolic with the historically laughable assertion that, “Over nearly seven decades, even as the United Nations helped avert a third world war, we still live in a world scarred by conflict and plagued by poverty.”

The UN stopped a third world war? Who knew?

Then, in his familiarly self-congratulatory style, Obama proclaimed, “I took office at a time of two wars for the United States. Moreover, the violent extremists who drew us into war in the first place — Osama bin Laden, and his al Qaeda organization — remained at large. Today, we’ve set a new direction.”

“…a new direction”? As if Obama didn’t follow through on President Bush’s general war direction, contrary to campaign promises he made before he became Commander-in-Chief.

But President’s main message of dealt with the mass unrest around the world in which he mentioned: the new nation of South Sudan, Côte D’Ivoire, Tunisia, Egypt, Libya, Iran (one line), Syria, Yemen, and Bahrain (he briefly mentioned Iran and North Korea later in the context of their nuclear weapons programs). But he expended the most words on the Israel-Palestinian conflict.

It is instructive to examine how the President views conflict around the world, however, before discussing his thoughts on peace between Israel and the Palestinians.

For instance, regarding the battle-born nation of South Sudan, a nation of 8.2 million Christians and Animists who fought two civil wars against the mostly Muslim north, losing about 2.5 million people, Obama said, “But the international community overcame old divisions to support the agreement that had been negotiated to give South Sudan self-determination.” As if the “international community” bestowed the honor of nationhood on 8.2 million people who fought against Muslim tyranny over a period of 40 years.

The President’s words about Egypt carried no hint of the danger that he helped unleash, both earlier this year and in his historic 2009 Cairo speech sponsored by the Egyptian Muslim Brotherhood, the sibling party to the Palestinians’ Hamas in Gaza. He said, “…for 18 days, the eyes of the world were glued to Tahrir Square, where Egyptians from all walks of life — men and women, young and old, Muslim and Christian — demanded their universal rights.” History will soon record that Egypt’s ancient Coptic Christians were worse off after Mubarak’s ouster and that Egypt’s peace treaty with Israel became a dead letter soon thereafter.

As for Libya, the President praised the UN, saying, “The Security Council authorized all necessary measures to prevent a massacre.” No word yet on what the UN will do about the growing body of reports assigning war crimes and massacres to the now former Libyan rebels, many of whom are Islamists. In this, The Who’s wisdom comes to mind, “Meet the new boss, same as the old boss.”

The President summarized the “Arab Spring” by saying, “The humiliating grip of corruption (Solyndra, anyone?) and tyranny is being pried open. Dictators are on notice. Technology is putting power into the hands of the people. The youth are delivering a powerful rebuke to dictatorship…” But, a study conducted in Egypt after Mubarak’s ouster showed a remarkable ignorance of Twitter in the general population – not surprising in a nation where only 20 percent of Egyptians enjoyed Internet access and where the huge protests got rolling only after the military regime turned off the Internet. As Frank Rich wrote for the New York Times last February, this “Twitter Revolution” lore is pure, “implicit, simplistic Western chauvinism.”

Regarding Yemen, a nation that held what most international observers said was the freest election in the Middle East (outside of Israel) in 2006, Obama called for “…free and fair elections as soon as possible,” which essentially gives the Presidential nod to violence whenever one side doesn’t like the electoral results that installed a different side in power.

The President spent the greatest effort trying to put the unilateral Palestinian statehood declaration genie back into the bottle from whence he released it the previous year. Obama started the discussion by recalling his own words when last he addressed the UN, “One year ago, I stood at this podium and I called for an independent Palestine. I believed then, and I believe now, that the Palestinian people deserve a state of their own.” He admitted that he was, “…frustrated by the lack of progress” in negotiations between Israel and Palestinians who wish to destroy Israel (funny thing how negotiating for your own demise can be difficult). The President then called upon the historical examples of Northern Ireland and South Sudan to show the difficulty in reaching a negotiated settlement – not noting that had the Israelis done to the Palestinians what the Muslim Sudanese did to their Southern Christian neighbors over 40 years of war, the population of a new Palestinian state would fit in a phone booth.

President Obama then said what needs to be said frequently, “Let us be honest with ourselves: Israel is surrounded by neighbors that have waged repeated wars against it. Israel’s citizens have been killed by rockets fired at their houses and suicide bombs on their buses. Israel’s children come of age knowing that throughout the region, other children are taught to hate them.”

Unfortunately, these words of truth are too little, too late: the majority of the UN’s General Assembly will vote to create a Palestine dedicated to the destruction of a UN member state, Israel, and the U.S. will be forced to veto the resolution.