The questions raised by Rep. Michele Bachmann and four of her congressional colleagues over the potential influence of Muslim Brotherhood operatives in Washington D.C. have been met with widespread scorn from the political chattering class and the establishment media.

Sen. John McCain (R-AZ) has denounced Bachmann from the Senate floor, Speaker of the House John Boehner has called the charges “dangerous,” and House Intelligence Committee chairman Mike Rogers is now trying to force her out. (Bachmann serves on the Intelligence Committee, whose members are selected at the sole discretion of the Speaker.)

And that’s just on the GOP side of the equation.

But the notion that the U.S. government is influenced by Muslim Brotherhood operatives is absolutely nutty, right?

Take, for example, the case of Louay Safi, a Syrian-American Islamic leader who has been actively involved with groups close to the Obama White House.

Safi himself has been fairly influential in government circles. For several years, he was only one of two endorsing agents for the Pentagon’s Muslim military chaplain program as Director of Leadership Development for the Islamic Society of North America (ISNA). He was also responsible for teaching about Islam to American troops deploying to Afghanistan and Iraq.

So it was particularly curious last year when Safi reappeared last August as the director of the political office of the newly-formed Syrian National Council (SNC). His profile appears on the SNC’s website, and pictures taken at the unveiling of the SNC in Istanbul shows Safi front and center of the leadership. 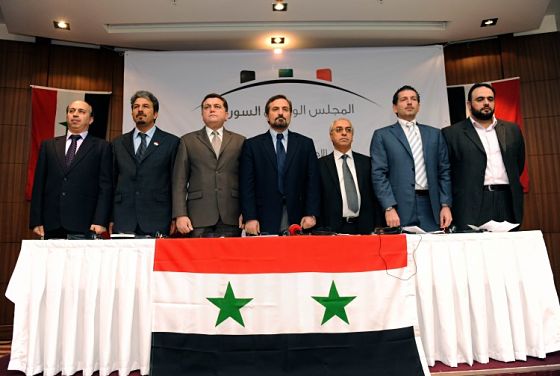 Now Safi’s presence on Al-Jazeera is nearly ubiquitous when it comes to matters concerning Syria and the efforts of the SNC and its subordinate Free Syrian Army to topple the regime of Bashar Assad:

The Syrian Muslim Brotherhood and its Islamist allies have complete control of the SNC–as testified to in multiple media reports, including the New York Times and the Washington Post.

One May 2012 Reuters report observes the pervasive control of Muslim Brotherhood over SNC operations and policies:

With many living in the West, and some ditching their trademark beards, it is hard to differentiate Brotherhood from leftists. But there is little dispute about who calls the shots.

From annihilation at home 30 years ago when they challenged the iron-fisted rule of Hafez al-Assad, the Brotherhood has recovered to become the dominant force of the exile opposition in the 14-month-old revolt against his son Bashar.

The report goes on to note one incident picked up by the Arab media (see also John Rosenthal’s report at the National Review) of Syrian Muslim Brotherhood leaders touting in meetings with other Middle East leaders their control of the SNC and how they positioned a “liberal” leader up front to maintain an illusion for Western leaders:

Careful not to undermine the council’s disparate supporters, the Brotherhood has played down its growing influence within the Syrian National Council (SNC), whose public face is the secular Paris-based professor Bourhan Ghalioun.

“We chose this face, accepted by the West and by the inside. We don’t want the regime to take advantage if an Islamist becomes the Syrian National Council’s head,” former Brotherhood leader Ali Sadreddine al-Bayanouni told supporters in a video.

The footage is now being circulated by Brotherhood opponents, seeking to highlight its undeclared power.

“We nominated Ghalioun as a front for national action. We are not moving now as Muslim Brotherhood but as part of a front that includes all currents,” said Bayanouni.

Here is the video of Bayanouni’s comments:

The SNC leadership also traveled to Doha, Qatar (where Safi is now based), back in February to receive the blessing of Yusef al-Qaradawi, the spiritual leader of the international Muslim Brotherhood.

Thus, it’s not a surprise that the non-Islamists opposing Assad have openly complained about the Muslim Brotherhood’s tight grip on the SNC.

Which brings us back to Louay Safi. How does someone who served as one of the Pentagon’s top Islamic advisers turn up as a political leader for the Syrian Muslim Brotherhood front group waging a bloody civil war against the Assad regime?

Perhaps someone should ask John McCain, John Boehner and Mike Rogers that question, as well as where their outrage was when an Egyptian terror group member was given a visa in violation of federal law, flown to the U.S. on the taxpayer’s tab, and escorted into the White House to meet with members of Obama’s national security staff to demand the release of the terror group’s leader imprisoned in the U.S.?

In the past Safi has cast himself as a neutral, objective academic, but his Muslim Brotherhood pedigree in the U.S. goes back a long way.

His ties to the U.S. Muslim Brotherhood became an issue when Safi’s relationship with the Pentagon became public after the November 2009 Fort Hood shootings.

At the time of Major Nidal Hasan’s lethal attack, Safi was teaching Islam to deploying soldiers at Fort Bliss. He had also been teaching a class, “Theology of Islam,” at Fort Hood. It is unknown whether Safi had any contact with Maj. Hasan.

According to the Dallas Morning News, the classes taught by Safi were overseen by the Naval Postgraduate School in Monterey, California, and Safi served as a sub-contractor to Hunstville, Alabama-based Camber Corp., which had a $17.7 million Pentagon contract to teach Islamic theology as part of the U.S. Army’s Islamic education program.

After the Fort Hood attack, Safi appeared with a group of U.S. Muslim Brotherhood leaders at a press conference announcing the formation of a “Fort Hood Family Fund” under the auspices of Safi’s ISNA. 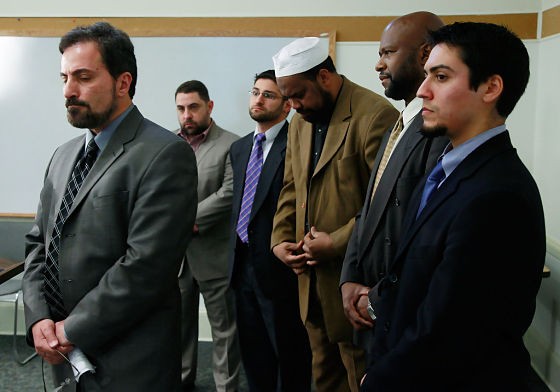 But Safi’s visibility and his ties to the Army’s Islamic education program brought considerable public criticism.

One of the primary complaints about Safi teaching Islam to deploying soldiers is that his organization, ISNA, had been named unindicted co-conspirator in the Holy Land Foundation case–the largest terrorism financing trial in American history.

In fact, Judge Jorge Solis, who presided over the Holy Land Foundation trial, wrote in an opinion later unsealed that there was “ample evidence” that ISNA and other U.S. Islamic groups had acted in support of Hamas.

The defendants in the Holy Land Foundation case were convicted on all counts and later sentenced to lengthy prison terms.

Safi’s critics also noted that the Holy Land Foundation case wasn’t the only terror support trial to which he had been connected.

Back in 2002, Safi’s offices were raided by the U.S. Customs Service of the Treasury Department as part of a widespread investigation into the SAAR Network, a financial empire funded by Saudi money but controlled and operated by U.S. Muslim Brotherhood operatives. At the time, Safi was working for the International Institute for Islamic Thought (IIIT), which was one of the primary targets of the raid, according to an affidavit by the Customs Service that was the basis for the federal search warrant.

Immediately following the raids Safi took to the media complaining about the raids and defending those under investigation. “Those who have been targeted are very moderate voices,” he told the media. He later wrote editorials parroting Osama bin Laden and claiming that the “extreme right” was turning the War on Terror into a War on Islam.

Then, in 2005, Safi was named “unindicted co-conspirator Number 4” in the trial of Palestinian Islamic Jihad (PIJ) leader Sami Al-Arian. As the Tampa Tribune noted during the trial, conversations between Al-Arian and Safi had been wiretapped under a top-secret Foreign Intelligence Surveillance Act (FISA) national security warrant. In one conversation, Safi called Al-Arian to ask him how the designation of PIJ as a terrorist organization by then-President Bill Clinton would impact Al-Arian’s work. Al-Arian later took a plea deal, with the federal judge in the case calling the PIJ US chief a “master manipulator” and “an active leader” of PIJ.

Much of this information was known prior to Safi becoming one of the Islamic advisers to the Pentagon and serving as one of the Defense Department’s two endorsers of Muslim chaplains.

But that wasn’t the only agency soliciting Safi’s help. As Rowan Scarborough at Human Events reported in September 2009, Safi was appearing with FBI officials (yes, the same FBI that had wiretapped his conversations with Al-Arian) at “outreach” events. Scarborough noted some of Safi’s writings supported violent jihad:

Some FBI agents are disturbed at his outreach. They point, for example, to a panel discussion last year at Yale.

On the panel was Louay Safi, an Islamic scholar and supporter of President Obama. Joining him that day was Valerie Caproni, the FBI’s top lawyer who weighs in on whether the bureau should investigate suspected extremists. The discussion was called, “Behind the Blindfold of Justice: Security, Individual Rights, & Minority Communities After 9/11.”

Safi is a Syrian-born author who advocates Muslim American rights through his directorship of ISNA’s Leadership Development Center. He advocates direct talks between Washington and Iran’s leaders. He has spoken out against various law enforcement raids on Islamic centers.

In a 2003 publication, “Peace and the Limits of War,” Safi wrote, “The war against the apostates [non-believers of Islam] is carried out not to force them to accept Islam, but to enforce the Islamic law and maintain order.”

He also wrote, “It is up to the Muslim leadership to assess the situation and weigh the circumstances as well as the capacity of the Muslim community before deciding the appropriate type of jihad. At one stage, Muslims may find that jihad, through persuasion or peaceful resistance, is the best and most effective method to achieve just peace.”

It was precisely the Quranic doctrine of a “preemptive strike” that Safi articulated that Maj. Hasan undoubtedly had in mind when he launched his terror attack killing 13 of his Army colleagues.

After the Fort Hood attack and the surrounding publicity of Safi’s role in teaching deploying troops came to light, several media outlets, including the Dallas Morning News, began asking hard questions about Safi.

Erick Stakelbeck at CBN News contacted a Fort Hood spokesperson, who admitted that “organizers of the seminar were not aware of Safi’s alleged association, but have had no issues or concerns over his presentations nor has any unit raised any.”

So the Pentagon was not aware that one of their top advisers had been the subject of one terror support investigation, had been picked up on FBI national security wiretaps, had personally been named unindicted co-conspirator in the trial of a senior terrorist leader, and was at the time working for an organization that federal prosecutors had already identified in court as a front for the Muslim Brotherhood that had supported Hamas.

And that same adviser is now a top political leader for the Syrian Muslim Brotherhood-dominated Syrian National Council.