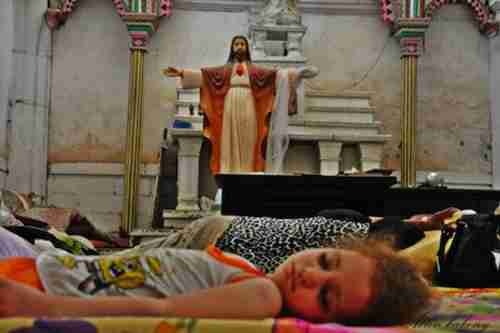 Christians forced out of the town of Mosul by ISIS take shelter in a church. (Aleteia)

There’s a frequently heard complaint that while the mainstream media frequently report on jihadist attacks, they seem to ignore the attacks on Christians. This criticism was directed at me after this article: “26-Dec-14 World View — ‘Barbaric’ ethnic massacre in Assam province shocks Indians”. One person wrote (paraphrasing): “John, my point is that you left Christians off your list entirely, while at the same time they are being brutally massacred all around the world. You didn’t get it then, perhaps due to your biases. You’re not getting it now.” Another person wrote, “Admit it. You don’t like Christians and you downplay violence against them.”

Let me assure you, Dear Reader, that I wouldn’t hesitate for a nanosecond to report on a massacre of Christians by jihadists or anyone else. So if that’s true, you may ask, then why don’t I write about massacres of Christians more often?

Let’s look at some numbers. How many Christians have actually been massacred by jihadists? I went to the anti-Muslim “Religion of Peace” web site where they have tables of jihadist attacks, including a table of Christians killed by jihadists. Here are the numbers:

A new report sponsored by the BBC finds that more than 5,000 people worldwide died in November alone — just one month — as a result of jihadist violence. This would indicate that about 60,000 people have died from jihadist attacks per year.

Once again, Dear Reader, when there is a massacre of Christians (let’s hope that it won’t happen), then I would not hesitate to report it. But what’s really going on is that jihadists are overwhelmingly attacking other Muslims. There’s a war going on, and it’s not between Christians and Muslims. It’s between Muslims and Muslims, and it’s going to have a huge effect on all our futures. The Religion Of Peace and BBC

According to figures published by the Syrian Observatory For Human Rights, there have been at least 1,878 documented executions by the Islamic State of Iraq and Syria (IS or ISIS or ISIL) since it became a self-declared “Caliphate” on June 28, 2014.

That figure includes 120 of its own ISIS members, who were executed for trying to return back home.

The dead included 930 members of the Shaitat tribe, an important Sunni Muslim tribe that’s been opposing ISIS. This is an example of Sunni Muslims massacring Sunni Muslims.

Hundreds of thousands of civilians have been killed in Syria since 2011, when Syria’s genocidal monster Bashar al-Assad began launching heavy weapons and chemical-laden barrel bombs on innocent women and children. Now they’ve been joined by ISIS in massacring thousands more Sunni civilians.

And by the way, I should also mention Pakistan. Last week’s horrific Taliban attack on a Peshawar army school, killing over 130 schoolchildren, shows that Pakistan is at war with itself, with Sunni Muslim terrorists killing Sunni and Shia Muslim civilians almost every day.