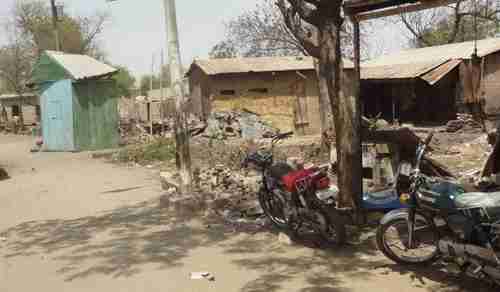 The town of Baga, after the Boko Haram attack, where hundreds or thousands of people were slaughtered

As I’ve been reporting for the last few weeks, there is a large and growing war in the Mideast and South Asia of Muslims at war with Muslims. Where a few dozen Westerners may be killed in terror attacks each year, the Muslim versus Muslim war is killing tens of thousands of Muslims every year, mostly civilians. This Muslim versus Muslim war is almost invisible in the West, which focuses on the occasional terrorist acts.

So today’s news is about three countries participating in this huge Muslim versus Muslim war, and how the war is escalating in each of the three countries.

The fight against Boko Haram in Nigeria is becoming more international, as troops from neighboring Chad entered Cameroon to fight Boko Haram there. Boko Haram terrorists kidnapped 80 people in northern Cameroon over the weekend, many of them children and young girls.

Boko Haram gained international notice when they kidnapped hundreds of schoolgirls, aged 12-25, on April 16 last year, in order to sell them into sexual slavery or force them to marry its fighters. Last week, Boko Haram burned down the town of Baga in northeast Nigeria, and 15-20 other nearby villages, killing up to 2000 resident civilians.

Cameroon’s government has been fighting Boko Haram in northern Cameroon apparently more successfully than Nigeria has in their territory. It is widely believed that some of Nigeria’s politicians and parts of Nigeria’s army support Boko Haram. With a presidential election scheduled for next month on February 14, the country is almost paralyzed in confronting Boko Haram.

Boko Haram’s goal is to mimic the Islamic State of Iraq and Syria (IS or ISIS or ISIL) in setting up an “Islamic State” in Nigeria, Cameroon and Chad. There are reports that Boko Haram has been linking up with elements of Al-Qaeda in the Islamic Maghreb (AQIM), making it a much more international terror group. The fear is that Boko Haram is going to gain so much power that it forces Nigeria’s government to collapse completely. All Africa and CNN and Guardian (London)

Major escalation in fighting in Yemen

This major escalation in the fighting is threatening the stability of Yemen, which is already one of the poorest countries in the world. If the Shia militias take full control of Sanaa, then there would be several consequences: The warlords of Sunni tribes have promised to take control of oil fields, essentially starving Sanaa of income; al-Qaeda on the Arabian Peninsula (AQAP) will become more active; and southern tribes would call for the secession of South Yemen, which had only joined with North Yemen in the early 1990s.

Another fear is that the war in Yemen will spiral into a proxy war between Iran and Saudi Arabia. Iran has been providing military and financial aid to the al-Houthis, while the Saudis have refrained, so far, from getting involved. However, the Saudis have also made it clear that if the Shia al-Houthis gain control of Yemen, or if Yemen’s government collapses, then Saudi Arabia will intervene.

For all of these reasons, some analysts believe that the current al-Houthi military initiative is little more than political posturing, to gain political leverage as a new Yemen constitution is being considered. According to this view, the al-Houthis could have taken control of Sanaa several months ago, but did not do so because they do not want to be in control of the government. Governing costs a lot of money that they do not have, and they cannot count on money from Iran, which is having its own financial problems. Instead, the al-Houthis want to have a major minority position in whatever government evolves. Al-Jazeera and Reuters

As we reported yesterday, the air strike on the convoy was a heavy blow to Hezbollah because it killed two of Hezbollah’s top commanders. But now it turns out that was also a heavy blow to Iran’s IRGC, which means that Israel’s air strike was a strike at all three: Hezbollah, Iran and Syria.

Iran does not like to admit that it has IRGC forces in other countries. According to some analysts, the IRGC has about 150,000 fighters in its al-Quds paramilitary force, and also has a navy and air force. Its primary mission is to foment terrorism in other countries, but its forces are currently fighting in Iraq and Syria.

At this point, it is not a question of whether, but only a question of how and when Hezbollah, Iran and Syria will strike back. Hezbollah claims that it has 60-100,000 rockets that it could use to strike anywhere in Israel. Iran might also strike at Jewish targets in other countries, as it has in the past struck at Jewish targets in Bulgaria and Argentina. Or Hezbollah may abduct Israeli soldiers near the border with Lebanon — a move like this triggered the 2006 war between Israel and Hezbollah.

Everyone “knows” that a war between Israel and Hezbollah is coming. Hezbollah is so tied down in Syria that it may not want to risk a full-scale war at this time, and so may decide to strike back only symbolically. However, even a symbolic strike could cause the situation to deteriorate quickly, and Israel and Hezbollah may find themselves in a war earlier than either of them expected. McClatchy and YNet