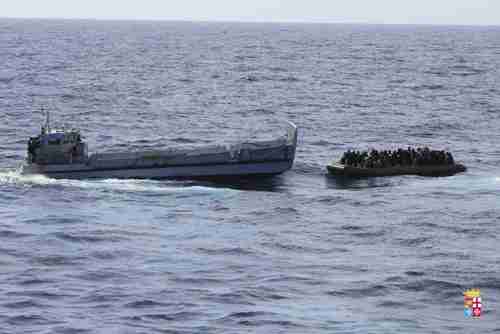 Rescue of migrants in rubber dinghy

At least 300 migrants have drowned in the Mediterranean Sea after their boats sank earlier this week. They had departed from Libya on Saturday in four rubber dinghies that sank after four days at sea. Only nine people were rescued out of hundreds of migrants trying to reach Italy’s Lampedusa Island.

This is a tragedy on an enormous scale and a stark reminder that more lives could be lost if those seeking safety are left at the mercy of the sea. Saving lives should be our top priority. Europe cannot afford to do too little too late.

This “tragedy” is going to force the European Union, once again, to go through a painful review of its search and rescue policy in the Mediterranean, to prevent it from turning into what Pope Francis called “a vast cemetery.”

Europe was forced into such a review after two tragic shipwrecks in October 2013 in which more than 400 Eritrean, Somali and Syrian migrants drowned. ( “16-Oct-13 World View — Sicily declares state of emergency as African migrants flood in”) After that, Italy began spending 9 million euros per month on a program called “Mare Nostrum” (Latin for “Our Sea”) to rescue drowning migrants trying to reach Italy.

But after much haggling, the Mare Nostrum program expired in October, after which the search and rescue function was taken over by an EU operation called “Triton.” However, Triton’s budget is much smaller, just 2.9 million euros per months. And it restricts its operations to only within 30 miles of the Italian coast.

In the year from October 2013 to October 2014, Italy rescued about 100,000 refugees. Estimates are that 3,000 refugees have died in the Mediterranean 2014, critics are complaining that “multiples of the 3,000” will drown because Mare Nostrum was replaced by Triton. Adding to the concerns is that the number of refugees attempting the trip doubled in 2014 to 218,000 from the 2013 figure. The number is expected to increase further in 2015.

It is politically almost impossible for the EU or any democratic government to ignore and allow thousands of people to simply drown, no matter who is at fault. Pro-refugee activists claim that the EU has no choice but to increase its search and rescue budget again.

People smugglers charge desperate people from Syria and North Africa thousands of dollars each, stuff them all on a boat and send it out to sea, knowing that someone will rescue them (or not caring whether someone will rescue them). In a well-publicized case in December, people smugglers packed almost 1,000 people into a boat, after typically collecting thousands of dollars from each migrant, and sent the ship out into the open sea with no crew, running on autopilot. ( “2-Jan-15 World View — European migrant crisis escalates with crewless cargo ships”) The Italian navy was able to board the ship and take control of it.

Skeptics point out that having a robust search and rescue operation only encourages migrants to risk the trip. They argue that if there had been no search and rescue effort, then migrants would not attempt to reach Europe. Others point out that desperate people in Syria and Eritrea will take the risk no matter what Triton’s budget is. Irish Independent and UNHCR and Guardian (London, 31-Oct-2014)

On Thursday morning, Putin came out and announced a ceasefire deal. According to the deal:

If the West lifts the sanctions on Monday, then Putin will have won a total victory, and completely humiliated the West. More likely, the sanctions will be kept in place, and nothing will have changed. We may have some answers by mid-week. AP and Globe and Mail (Toronto) and Russia Today