“Reports of the demise of the United States-Israel… You’re here to tell the world that our alliance is stronger than ever,” the Israeli Prime Minister told the crowd at AIPAC.

“You may not have heard,” but “I’ll be speaking at Congress tomorrow,” joked Netanyahu. “Never has so much been written about a speech that hasn’t been given,” he added.

“I do want to say a few words about the purpose of that speech,” said Netanyahu. “I have great respect for both” President Obama and the office of the President of the United States, he stated.

The America-Israel alliance “has been championed by both parties, and so it must remain,” said the Israeli Prime Minister. He added that “the last thing that I would want is for Israel to become a partisan issue, and I regret” that some people have perceived it as such.

Netanyahu explained what he would be talking about in Tuesday’s address to a joint session of Congress.

The Israeli leader said that “a potential deal with Iran could threaten” the survival of Israel. “Iran is the foremost state sponsor of terrorism in the world.”

Netanyahu displayed a map that showed “Iran has been training, arming, dispatching terrorists on five continents.” He added, “Iran envelops the entire world with its tentacles of terror.” 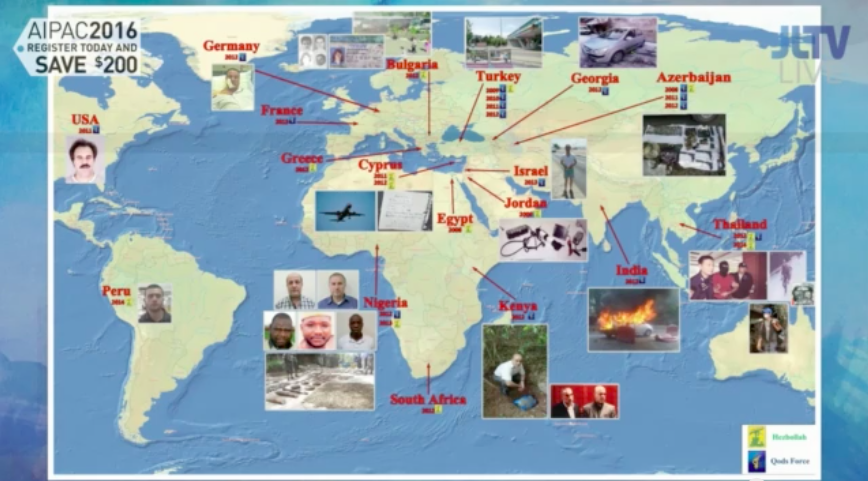 “Imagine what Iran would do with nuclear weapons,” he asked. “This same Iran vows to annihilate Israel. If it develops nuclear weapons, It would have the means to achieve that goal. We must not let that happen.”

“As Prime Minister of Israel, I have a moral obligation to speak up in the face of these dangers while there’s still time to avert them” he declared. “For 2,000 years, my people, the Jewish people, were stateless defenseless voices. We were utterly powerless… we could never speak on our own behalf, and we could not defend ourselves. Well, no more!”

Netanyahu declared, “The days where the Jewish people are passive in the face of threats to annihilate us. Those days are over!”

He added, “Today we are no longer silent. Today we have a voice… Tomorrow… I plan to use that voice” in an address to a joint session of Congress.

“I plan to speak about an Iranian regime… That is devouring country after country in the Middle East, that is exporting terror throughout the world, and that is developing the capacity to make nuclear weapons.”

Netanyahu told the audience that we must always remember that what brings America and Israel together is that “we are family,” and that families sometimes have disagreements, but the U.S. and Israel are linked forever in their common heritage, tradition and values.