After almost $1 billion development costs, Healthcare.gov is still a disaster 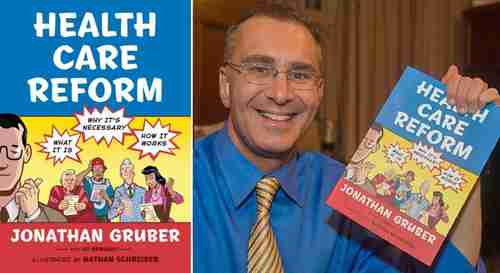 According to Obamacare architect Jonathan Gruber, Obamacare passed because of the stupidity of the American people who supported it

Now, almost 1-1/2 years later, the web site still does not work. Developers hired by the Administration have focused on making the user interface pretty, able to collect data, and display basic information screens. Once the web site gathers the data, it simply sends the data along as a kind of e-mail message to the appropriate insurance company.

At that point, the insurance company has to go through expensive manual procedures to register the patient. There are constant news reports of patients who never got registered, or who were incorrectly registered, or whose insurance was dropped when there was a change, such as a marriage or a baby. There are reports of massive errors in applying subsidies. These are typical of the kinds of errors routinely made in manual systems in pre-computer days.

So it has been about 5 years, almost $1 billion in development costs, and all we have is a simple shell program running as a web site, designed to look pretty to avoid embarrassment to the Obama administration, but with nothing underneath.

This is a very simple web application. I could have implemented it as a one-man project in about a year. With a small team of programmers and testers, this could have been implemented in 4-6 months for a cost of a few million dollars.

So where the hell did that $1 billion go? Until I get an explanation of how a $50 million project cost $1 billion, then I have to assume that Administration is conducting massive government fraud here, padding the bank accounts of its cronies with tens of millions of dollars each. Why are the Republicans in Congress not investigating? Most likely answer: The Republicans and their cronies are in on the gravy train. Everyone makes astronomical amounts of money, and the taxpayers get screwed.

After last year’s disaster, a computer contracting firm, Accenture Federal Services, was issued a $91.1 million no-bid contract to fix the web site. So now, after spending another $91.1, we still have nothing more than this shell web site that I could have written by myself in a year, and all it does is collect information and e-mail it to insurance companies.

And even with that, a typical deductible is $5,000-15,000, which means that most of these insured are effectively uninsured, since they will have to pay all their own medical expenses anyway. And of the 11 million that signed up, 89% of the new enrollees last year were for Medicaid, which provides almost no effective coverage at all. So there may be more “effectively uninsured” people today than there were uninsured people in the past.

None of this would have happened before Generation-X came into power in the late 1990s. Today, with Generation-X in charge, criminal fraud is so entrenched in Washington, on Wall Street, and in our culture that no one has any shame, and no one cares about billions and billions of dollars being thrown away on Obamacare, which has accomplished nothing except to boost Barack Obama’s ego. Politico and Free Beacon

As we wrote last month, this includes millions of children of all ages. Birthdates and social security numbers never change, and hackers can dip into this treasure trove of data for years to create an unending flow of identity theft victims.

It now turns out that even 8.8 million non-customers of Anthem could be victims of the data hack, and future victims of identity theft. The reason is that Anthem is part of a national network of independently run Blue Cross Blue Shield plans through which BCBS customers can receive medical services when they are in an area where BCBS is operated by a different company, and so any customer of any BCBS insurance plan is potentially a victim. Reuters

Al-Sisi and Erdogan miss in Riyadh, signaling stormy times ahead

Speculation was buzzing that bitter enemies al-Sisi and Erdogan might meet one another, and Salman would mediate some kind of rapprochement between the two. Well, al-Sisi completed his visit on Sunday, and Erdogan is going to meet with Salman on Monday.

So instead of leading to a new Sunni Muslim world of harmony, the entire incident is very publicly exposing just how bitter the split is between Egypt and Turkey. Turkey and Egypt were friends when Mohamed Morsi was president of Egypt, and his Muslim Brotherhood was in charge, but now the presidents of Egypt and Turkey cannot stand to be in the same room with each other.

Egypt will be watching the meeting between Salman and Erdogan very nervously. Salman’s predecessor, King Abdullah, had very strong policies against the Muslim Brotherhood and Hamas, causing a bitter realignment of Egypt and Saudi Arabia on the anti-MB side, versus Qatar and Turkey on the pro-MB side. So Egypt is concerned that Salman will reverse Abdullah’s policy on MB, which would almost completely isolate Egypt — though Israel would still be an ally.

Things may have gotten a lot worse over the weekend. As we reported yesterday, Egypt has now declared Hamas to be a terrorist organization. This is turning out to be more than just a simple act of adding Hamas to a list. It strikes at the very heart of giving lip service to Arab unity in the resistance against Israel, since now Israel’s view of Hamas has been confirmed by Egypt.

The BBC has been running stories about a new building up of rockets, missiles and tunnels in Gaza, following last summer’s Gaza war with Israel. Hamas was completely humiliated by that war since they were so thoroughly defeated by Israel, but now they’re applying “lessons learned” to create a network of tunnels and rockets that they hope will draw a lot more Israeli blood.

It was last summer’s Gaza war that exploded the fracture in the Arab world over the Muslim Brotherhood and Hamas. If, as the BBC reports suggest, Hamas is planning another war in the fairly near future, then the situation may be explosive. Middle East Eye and Saudi Gazette