Tunisia in shock after terror attack on museum in Tunis 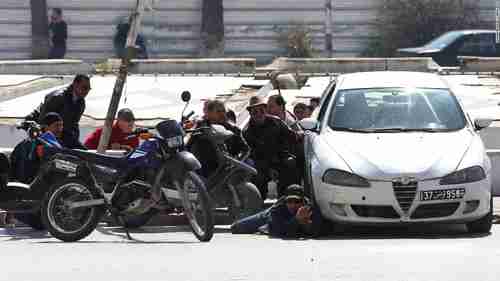 Terrorist acts are occurring every day around the Muslim world, so you would think that no terrorist act in a Muslim country would be a surprise to anyone. But Tunisians thought that they had escaped the worst of the “Arab Spring” terror. The “Arab Spring” began in Tunisia on January 4, 2011, when a 26-year-old Tunisian street vendor named Mohamed Bouazizi doused himself in gasoline, lit a match, and burnt himself to death, in protest of government policies. Since then, Tunisia has been mostly non-violent– unlike Egypt, Syria, and Yemen, for example– and currently has a secular government.

So Tunisians were shocked on Wednesday by the first terrorist attack in Tunisia in over ten years. It was the worst attack in the country since an al-Qaida militant detonated a truck bomb in front of a historic synagogue on Tunisia’s island of Djerba in 2002, killing 21, mostly German tourists.

Two gunmen infiltrated security at the well-known Bardo Museum in Tunis, right next door to the parliament building. They took and killed 22 hostages, with 50 people injured. Almost all of the casualties were foreign tourists, suggesting that the terrorists are trying to cripple tourism in Tunisia, which is the country’s biggest industry. The casualties were Tunisian, French, Italian, Polish, and Japanese.

This is catastrophic for Tunisia. We need to stop those kind of people [referring to terrorists] for good. […]

I want the people of Tunisia to understand firstly and lastly that we are in a war with terror, and these savage minority groups will not frighten us. The fight against them will continue until they are exterminated.

Twitter accounts associated with the Islamic State (IS or ISIS or ISIL or Daesh) were described as overjoyed at the attack. Tunis Times and AP

Beneath the surface, Tunisia is a terrorist breeding ground

No one has yet claimed responsibility for the attack in Tunis. It might have been Ansar al-Sharia, the Libya-based terror group that was responsible for the murder of 21 Egyptian Coptic Christians last month, and for the murder of American ambassador J. Christopher Stevens in Benghazi in 2012. Or it might have been a terror group linked to Al-Qaeda on the Islamic Maghreb (AQIM).

Tunisia has been the Arab Spring’s number one success story, with a secular, democratic government, but beneath the surface there are problems. Tunisia has been the number one supplier of foreign fighters to ISIS: some 3,000 Tunisians have traveled to Iraq and Syria to join ISIS, more than any other country in the world. For years, the vast Tunisian desert has been home to training camps for various jihadist groups. And Tunisia has been awash with weapons, ever since vast weapons storehouses became available following the fall of Libya’s Muammar Gaddafi.

According to a family member of an ISIS member, Tunisian preachers are skillful at convincing young men to join ISIS:

At Friday prayers, when a good number of Muslims get together in the mosques, after the prayers, the imams start to give them some advice to follow. They say, for example, ‘You have to go to Syria to kill Bashar’s army. Even if you die, you’ll go to paradise after.’ And in this way, Daesh [ISIS] got a large number of soldiers.

That’s exactly the point. As I have been saying for several months, there is a large and growing war going on, and it is a war of Muslims versus Muslims. All across North Africa, the Mideast, and South Asia, Muslims are killing Muslims at the rate of 5,000-10,000 per month. By comparison, only a minuscule number of Westerners are killed by jihadists, usually a few dozen per month. And the few attacks on Westerners, such as the Charlie Hebdo attack in Paris and Wednesday’s attack in Tunis, are publicity stunts that are sensationally successful because they get a great deal of free publicity from Western media, which then attracts many more discontented young men and women to join ISIS. International Business Times (20-Feb) and Bloomberg