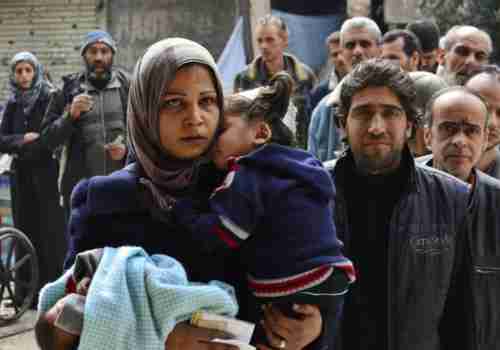 Islamic State (IS or ISIS or ISIL or Daesh) militias have taken control of a southern district in Damascus, Syria, and are just a few kilometers from the military headquarters of the regime of Syria’s president Bashar al-Assad. Al-Assad’s army has suffered several recent defeats, especially the major military defeat in Idlib, and so it appears that ISIS may present a real military challenge to the regime in its seat of power. Reports indicate that ISIS is also receiving help from the al-Qaeda linked Jabhat al-Nusra (al-Nusra Front), a group with which it often has battles in other places and times.

ISIS’s advance into Damascus is through the Yarmouk refugee camp, home to about 18,000 Palestinian refugees. The camp has been under siege from al-Assad’s army since 2011, since al-Assad feared that the Palestinian refugees would join the fight against him. In the last couple of years, the Free Syrian Army and al-Qaeda linked Jabhat al-Nusra (al-Nusra Front) have entered Yarmouk and fought each other, making Yarmouk increasingly dangerous for the civilians living there. Now the invasion of ISIS has turned Yarmouk into a humanitarian disaster. Aid groups are unable to enter Yarmouk, with the result that the civilians have no food and water, no electricity. Anyone who leaves his home risks getting shot and killed by snipers on the rooftops.

Other reports indicate that al-Assad’s forces are trying to fight ISIS by means of “violent shelling by the regime forces using tank shells and ground-to-ground missiles,” weapons that are more likely to kill civilians than ISIS.

According to Hanan Ashrawi, international Palestinian activist and executive of the Palestinian Authority (PA/PLO) government, on Saturday:

The current situation in the al-Yarmouk refugee camp is a heartbreaking catastrophe.

Since December 2012, tens of thousands of men, women and children, most of whom are Palestinian refugees, have been forced to flee and have had their lives torn apart by war. The 18,000 residents who remain in Yarmouk are in great danger from extremist groups, including ISIS, that are seeking to take full control of the camp.

We call on all members of the international community, particularly the United Nations, European Union and the United States, to safeguard the innocent people of Yarmouk and ensure that all sides commit to a permanent ceasefire.

And yet, with almost the entire Mideast in flames these days, the women and children in Yarmouk have little hope of receiving any international aid quickly. ARA News (Syria) and AP and Jerusalem Post

Iran’s press has been euphoric and ecstatic over this week’s nuclear agreement between Iran and Western negotiators. Many newspapers are devoting entire editors to the agreement. A typical headline is, “Our nation is on the cusp of a great victory.”

The American mainstream media, who are overwhelmingly Democratic and always support President Obama no matter what he does, have stayed in line by endorsing the deal, calling it “historic” or “a great victory for Obama’s legacy.”

To use the old joke, this is actually déjà vu all over again. There was an interim nuclear agreement that Iran signed with the West in November 2013 that had similar problems. The full text of that agreement has never been published. U.S. Secretary of State John Kerry said that, under the agreement, Iran had no right to enrich uranium, while Iran’s foreign minister Mohammad Javad Zarif gloated that Iran had preserved its right to enrich uranium. The White House published a “summary,” but Iran completely rejected the White House summary as “not true.” Then, in January 2014, Iran disclosed that there was a secret side agreement to the nuclear agreement. The White House first confirmed this, saying that the side agreement would be made public, and then denied that there was a secret side agreement.

So it appears that we are starting off with the same kinds of lies and deceptions that were part of the 2013 interim agreement.

There is another thing bothering me. During his “mission accomplished” televised victory press conference earlier this week after the deal was announced, President Obama referred to a fatwa supposedly issued by Iran’s Supreme Leader Ayatollah Seyed Ali Khamenei that Iran’s nuclear program is entirely peaceful, and that forbids the development of nuclear weapons. The fatwa supposedly says, “the production, stockpiling and use of nuclear weapons are forbidden under Islam and that the Islamic Republic of Iran shall never acquire these weapons.”

The problem is that nobody has ever seen this fatwa, because it does not exist, according to a number of Iranian and Arab writers have researched the issue. “18-Mar-14 World View — Does Iran’s anti-nuclear fatwa really exist, as claimed?”

So the question is: Why did Obama refer to this nonexistent fatwa? Is he simply lying because he can always get away with lying? Does he think the reporters in the mainstream media are so stupid that they won’t even check it out? Well, if that’s what Obama thinks, then Obama is probably right.

At any rate, it is pretty clear that President Obama is willing to say and do anything to get the final deal with Iran ratified by the July 1 deadline. We’ll see what he’s willing to do as the weeks go by. BBC and New York Post and Memri (17-Mar-2014) and Memri (4-Oct-2013)

Our task of countering terrorism has been made all the more difficult by the fact that the planners and financiers of this brutality are deeply embedded in our communities.

Radicalization that breeds terrorism is not conducted in the bush at night. It occurs in the full glare of day, in [Islamic schools], in homes and in mosques with rogue imams.

On Saturday morning, al-Shabaab warned that there would be more attacks, and that, “Kenyan cities will run red with blood.” Al-Jazeera