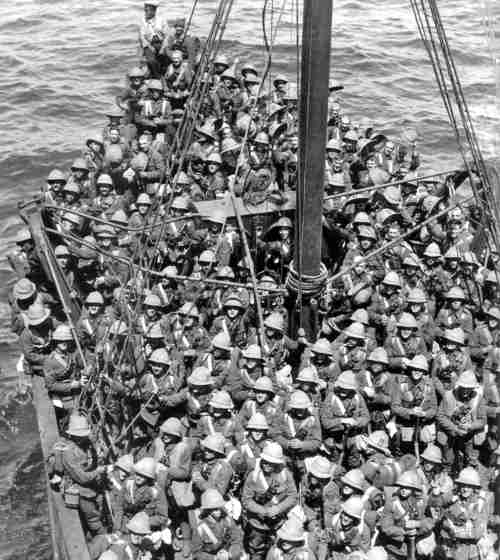 British soldiers just before landing at Gallipoli in 1915

There are so many bizarre things going on in the world today, and this one has to be near the top of the list.

For Turkey, Australia and New Zealand, the most important battle of World War I was the Battle of Gallipoli, which ran from April 25, 1915, to January 9, 1916. Turkey has commemorated the battle in the past on April 25.

According to Armenia, Turkey (the Ottoman Empire) committed a genocide against Armenians, and the genocide began on April 24, 1915, when the Young Turks government began deporting Armenians. Turkey denies that there was a genocide. Armenia has scheduled a centennial commemoration of the start of the deportations for next month on April 24.

In view of Armenia’s genocide commemoration, Turkey has moved its Gallipoli commemoration to April 24 as well, so that the two commemorations compete with one another.

“Anzac” is the acronym for Australian and New Zealand Army Corps, and April 24 is commemorated every year in Australia and New Zealand as Anzac Day, the first day of the Battle of Gallipoli. Australia had only become an independent nation in 1901, and New Zealand in 1907, so these were very young nations, anxious to prove themselves to the world.

Here’s a summary of the Battle of Gallipoli:

The Battle of Gallipoli was pretty much a disaster for all sides, but it is still remembered as a major turning point in the history of Australia and New Zealand. The character of these two nations was forever shaped by this experience. BBC

Turkey debates its role in the Armenian genocide

At the same time that Turkey was fighting the British, Irish, Australians and Kiwis at the Battle of Gallipoli, Turkey, which is a Muslim nation, was also in a war with Russia, which is an Orthodox Christian nation, in the Caucasus region.

Turkey (as the Ottoman Empire) and Russia were previously in a generational crisis war with the Crimean War of the 1850s. That war was extremely bloody and a disaster for Turkey, and so now they were fighting again, and nothing mattered to Turkey at this time than the continued existence of Turkey and its way of life.

On April 24, 1915, the Young Turks government of Turkey arrested and executed several hundred Armenian intellectuals. After that, ordinary Armenians were turned out of their homes and sent on death marches through the Mesopotamian desert without food or water. Frequently, the marchers were stripped naked and forced to walk under the scorching sun until they dropped dead. People who stopped to rest were shot. In other cases killing squads or “butcher battalions” drowned Armenians in rivers, threw them off cliffs, and burned them alive. The Turkish countryside was littered with Armenian corpses.

Turkey generally agrees that many Armenians died at the time, but they claim that the atrocities were not part of any organized plan. Furthermore, they point to the fact that some 2.5 million Turkish Muslims also lost their lives during World War I.

As a result, Turkey has always denied that what happened in 1915 was a genocide. However, it is worth noting that this opinion is not unanimous in Turkey, and many Turks believe that they should just concede that a genocide occurred in order to defuse the issue and move on. History.com and Hurriyet (Istanbul) and Der Spiegel (Germany)

The politics of genocide and rape — in Turkey and elsewhere

Some of the bloodiest genocides of the 20th century were perpetrated by Great Socialist or Communist leaders — Stalin in Ukraine in the Holodomor in the 1930s, Mao Zedong in China’s Great Leap Forward in the 1950s, Pol Pot in the Killing Fields of Cambodia in the 1970s — without a peep from liberals.

This became clear to me in 1975, when far-left liberal feminist Jane Fonda and far-left “anti-war” liberal John Kerry (currently Secretary of State) approved of the massive slaughter of millions of Cambodians by Great Socialist Leader Pol Pot. Fonda and Kerry could not have cared less how many people starved or tortured, had their fingernails pulled or eyes gouged out, as long as it was done by a socialist. And this was a decade after college kids were carrying copies of the “Little Red Book of Chairman Mao” while Chairman Mao was massacring tens of millions of people.

The same kind of thing is true of rape. When Bill Clinton was credibly charged in the late 1990s of raping several women, it became clear that ultra-feminist liberal rape victim Susan Estrich could not have cared less how many women Clinton had raped. The same was true of his wife, Hillary Clinton. These days, ultra-feminist rape activists could not care less how many women were raped by the sleazy Julian Assange, who has been hiding out in the Ecuador embassy in London to avoid facing rape charges.

So I mention all that to make clear how cynical I am about these kinds of charges. They have absolutely no meaning except to be used hypocritically as a political weapon, and generally have no relationship to the truth.

So now let us turn to whether the deaths of a million Armenians in Turkey in 1915 can be classified as “genocide.”

First off, the legal definition of genocide cannot apply, because genocide was not a “crime” until 1948, and the slaughter occurred in 1915. In fact, the word “genocide” didn’t even exist in 1915. It was only invented in the 1940s, in reaction to the Nazi Holocaust.

The Contracting Parties confirm that genocide, whether committed in time of peace or in time of war, is a crime under international law which they undertake to prevent and to punish.

In the present Convention, genocide means any of the following acts committed with intent to destroy, in whole or in part, a national, ethnical, racial or religious group, as such:

The following acts shall be punishable:

Persons committing genocide or any of the other acts enumerated in article III shall be punished, whether they are constitutionally responsible rulers, public officials or private individuals.

So, if we apply this definition, then it is clear that the Armenian Genocide was indeed a genocide. The Young Turks government deported millions of Armenians, subjecting them to starvation, exhaustion and death. This easily complies with the UN definition.

However, so do a lot of other things. I point to the Allied firebombing of Dresden and Tokyo, and the use of nuclear weapons on Japanese cities at the end of World War II as examples of mass slaughter that also clearly fit the UN definition of genocide.

Generational Dynamics has its own definition of genocide that differs slightly (though not significantly) from the United Nations definition. And acts of genocide are crucial in understanding how a society or nation goes from one generational crisis war to the next.

During a generational crisis war, like World War II for America, the value of an individual human life gets smaller and smaller, and the only thing that matters is the survival of the society and its way of life. Every crisis war ends in some variation of what is called “an explosive genocidal climax,” where the value of an individual human life is effectively zero, and nothing matters except winning the war at any cost. At that time, the war can end with a mass slaughter that is regretted for decades.

After the war ends, the winners write the history of what happened, and decide which actions (the losers’ actions) were genocidal and which were not (the winners’ actions). However there is something that the survivors of both the winning and losing side agree on: What happened is so horrible that it must never be permitted to happen again. And I emphasize that both the winners and losers feel the same way about this. And so they create austere rules and institutions to prevent it from happening again.

This leads to a generational Awakening era (like America in the 1960s), where the young post-war generations reject their parents’ austere rules and institutions, and the value of an individual human life becomes paramount again. This leads to a generational Unraveling era, like America in the 1990s, where all the austere rules and institutions completely unravel. Finally, the society enters a new generational Crisis era, as America did in the early 2000s. All the survivors from the previous crisis war are gone (retired or dead), and there is no one left who remembers the horrors of the previous genocidal climax, or who vowed never to let it happen again. And then it does happen again. History.com and UN Convention on the Prevention and Punishment of the Crime of Genocide