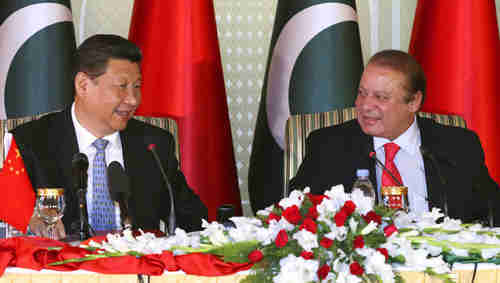 Xi Jinping and Nawaz Sharif on Tuesday in Islamabad (AP)

As the visit began, an essay by Xi appeared in Pakistan’s press describing the love affair between the two countries:

This will be my first trip to Pakistan, but I feel as if I am going to visit the home of my own brother. Over the years, thanks to the nurturing of generations of leaders and people from all sectors of both countries, China-Pakistan friendship has flourished like a tree growing tall and strong. No matter how the circumstances in our two countries, the region and the world change, our bilateral relations have enjoyed sound and steady growth. We have always respected, understood and supported each other on issues concerning our respective core interests. In Pakistan, our relationship is poetically hailed as a friendship “higher than mountains, deeper than oceans and sweeter than honey.” In China, Pakistan is known as a sincere and reliable friend. Obviously, China-Pakistan friendship is deeply felt in the hearts of our two peoples.

In May 2011, Pakistan’s ambassador to China Masood Khan described the relationship between Pakistan and China as “higher than mountains, deeper than oceans, stronger than steel, sweeter than honey, and dearer than eyesight.”

It sounds like true love to me. Daily Times (Pakistan) and Dawn (Pakistan)

Following last week’s visit by China’s president Xi Jinping, China will deliver another 50 JF-17 Thunder aircraft to Pakistan over a period of three years. 60 of these aircraft have already been delivered, making a total of 110. The jets are considered a symbol of friendship between Pakistan and China, because the technology was developed jointly by the two countries.

This comes at a time of an accelerating military buildup by the Chinese and their ally Pakistan. China is annexing other countries’ territories in the South China Sea, and is aggressively building military bases in those territories. China is building the Gwadar Port military naval base in Pakistan on the Indian Ocean, where they can launch missile attacks on America’s base in Diego Garcia and on American military bases and aircraft carriers in the Mideast. And China agreed last week to build a railroad line from western China, through Pakistan to the Gwadar Port base, to be used for both commerce and military transport. The News (Pakistan) and Want China Times (Taiwan) and Daily Times (Pakistan)

It has been just a week since Saudi Arabia announced that it has met its military objectives in Yemen, that “Operation Decisive Storm” was ending, and “Operation Restoration of Hope” was beginning.

Iran continues to keep a fleet of warships in the Gulf of Aden, raising concerns that Iran is supplying weapons to the Houthis. Reuters and AP