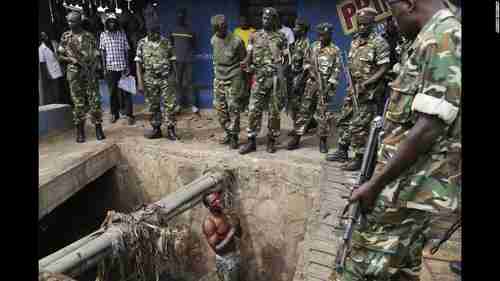 Hundreds of college students in Bujumbura, Burundi’s capital city, are demonstrating against president Pierre Nkurunziza, because he plans to run for a third term as president, apparently violating the constitution. Nkurunziza became president in 2005 when a new constitution was adopted, and he was re-elected as president in 2010. The constitution restricts anyone from more than two terms, but Nkurunziza now says he’ll run for a third term, claiming that the first term doesn’t count because he was appointed, not elected. His announcement has triggered large anti-government protests, violence and a couple of deaths, ahead of the election in June.

Burundi is right next door to Rwanda, and was part of the massive genocidal civil war between Hutus and Tutsis in 1994 that killed almost a million people in just three months. (See my “Generational history of Hutu and Tutsi tribes” in my April 30 report on the Burundi violence.)

The renewed violence is frightening a lot of people, who fear that it will spiral into a renewal of the 1994 war between Hutus and Tutsis. Some 400,000 people have already fled from Burundi into refugee camps in neighboring countries, mostly Rwanda.

The fact that Nkurunziza is running for a third term is already a very bad sign. Burundi’s Constitutional Court issued a ruling that the third term was legal, but one of the judges had to flee the country, claiming that the Nkurunziza administration had threatened the court unless they supported him.

And Nkurunziza is promising that if he wins a third term, then he won’t run for a fourth term. This is completely laughable, as he’s currently breaking earlier promises not to run for a third term. And anyone who’s ever believed in a politician in the past is quickly aware that such promises are completely worthless. CNN and AP

From the point of view of Generational Dynamics, what we’re witnessing here is a common pattern that occurs frequently after a country that goes through a crisis civil war. A new generation has grown up since 1994, putting Burundi into a generational Awakening era. And what frequently happens at these times is that people panic at any sign of violence for fear that the crisis civil war will be repeated.

Once of the most interesting examples of this occurred in ancient Rome in 49 BC, when Julius Caesar “crossed the Rubicon River” with his army, triggering a brief civil war. There’s historical evidence that the people of Rome panicked, because they feared a repeat of the extremely bloody “Social War” of the Italian allied states that occurred from 91-87 BC. All of Italy was devastated, and over 100,000 people were killed.

The irony is that the panic is completely misguided, because a new crisis civil war during a generational Awakening era is impossible. The reason is the same reason why people panic — there are plenty of traumatized survivors of the previous crisis civil war, and they have been devoting their lives to making sure that nothing like that happens again — and nothing like that does happen again as long as those survivors are alive and in power. It’s only decades later, when they retire or die, that a new crisis civil war can begin.

Contrast what is happening in Burundi to the situation in the Central African Republic (CAR), where a true crisis civil war is in progress. CAR’s last generational crisis war was the 1928-1931 Kongo-Wara Rebellion (“War of the Hoe Handle”), which was a very long time ago, putting CAR deep into a generational Crisis era, making a new crisis war inevitable. Here’s how Médecins Sans Frontières (MSF – Doctors without Borders) described the current situation:

We have seen some areas where all there is are burnt houses. People are hiding in the forest afraid of the presence of armed groups. There are no security forces or actors providing healthcare. People are living in very dire conditions that could get worse at any moment if the insecurity persists. On top of that, the rainy season is about to start and people living in forests are completely exposed to harsh weather. Villagers even risk their houses being destroyed if they cannot come home soon to prepare them for the heavy rains to come. What we are seeing here is an example of the situation that hundreds of thousands of people suffer in CAR every day: a terrible mix of violence, displacement and a lack of access to even basic healthcare.

CAR is a huge country, and this kind of violence has been going on across the entire country for over two years, with no end in sight. The violence in Burundi is not nearly as bad and is highly localized, and has only been going on for a few weeks.

The violence going on in Burundi now is very similar to America’s last Awakening era, the 1960s. You had “long hot summers” and massive riots in Los Angeles, Chicago and other cities, and you had the Weather Underground setting off bombs. There were people, especially older people who had seen what happened in other countries in World War II, who were predicting that America could spiral into violence, possibly into a civil war. Of course that did not happen, and could not happen during a generational Awakening era.

So the fears of another massive civil war between the Hutus and Tutsis at this time are misplaced. That does not mean that that the people of Burundi have nothing to fear. A civil war may not last years, but it might last a few weeks or months. Also, the president Nkurunziza may follow the wonderful example of Zimbabwe’s president Robert Mugabe, who has been consistently reelected for 40 years by sending his army out to kill, torture, rape, dismember or massacre anyone who opposes him. ( “17-Apr-15 World View — South African xenophobic violence echoes 1820s Mfecane Zulu massacre”)

Nkurunziza is a Hutu, and he may follow Mugabe’s example and send the army out to torture and kill the Tutsis. The foundations for this outcome have already been laid. Daily Maverick (S. Africa) and CS Monitor

Fears continue to grow throughout Central Asia of an alliance between the Taliban and Islamic State (IS or ISIS or ISIL or Daesh) in Afghanistan, as I described early last month. An alliance between the two militant groups faces many obstacles. Although both groups are simply thugs, the doctrines they claim to follow are significantly different, with ISIS following a strict form of Salafi-Takfiri Islam from Saudi Arabia, while the Afghan Taliban are mostly followers of Deobandi Islam based in South Asia. Furthermore, they have different geopolitical objectives, with ISIS claiming to lead a worldwide caliphate, and the Taliban’s interested focused on the Afghanistan-Pakistan region.

However, in the Afghan province of Kunduz, it appears that the Taliban and ISIS have buried their differences enough to work together. The evidence is from an examination of dead bodies of militants fighting security forces in Kunduz. Many of the fighters are foreigners, including some women from Chechnya, and some villages under rebel control are flying both the white flag of the Taliban and the black flag of ISIS.

The Afghan Taliban would welcome ISIS if they worked with the Taliban in the way that other militant groups, including al-Qaeda, Tehrik-e-Taliban (TTP – Pakistan Taliban), and Islamic Movement of Uzbekistan (IMU), have. These groups are free to pursue their own agendas as long as they do not interfere with Taliban affairs and sometimes assist as requested. But instead of cooperating with the Taliban, ISIS may compete with the Taliban in Afghanistan, leading to possible violence between the two groups. Public Radio International and The Diplomat and Guardian (London)