Vietnam protests China’s fishing ban in the Gulf of Tonkin 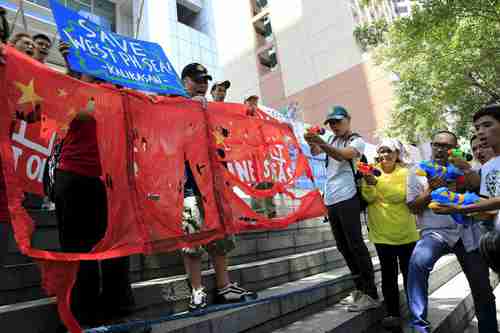 Vietnam is protesting China’s unilateral ban on fishing in Vietnamese waters that include the Gulf of Tonkin, nominally “to promote the sustainable development of the fishing industry.” The ban will last until August 1.

Vietnamese officials are advising their shipping industry to ignore the ban.

China is claiming that the ban is required for ecological reasons, but ecological activists in Manila are demanding that China stop the ecological destruction caused by ongoing activities to build man-made islands in the South China Sea. Thanh Nien News (Hanoi) and Reuters

China says war with US in South China Sea is inevitable

According to commentary in China’s Global Times newspaper:

If the United States’ bottom line is that China has to halt its activities, then a U.S.-China war is inevitable in the South China Sea.

The intensity of the conflict will be higher than what people usually think of as ‘friction.’

There are actually two separate (though related) issues here, and it is unclear whether this threat of war applies to one or both issues.

As we reported last week, the level of military tension between the US and China escalated substantially when China repeatedly demanded that an American P-8A Poseidon surveillance plane leave the area immediately. The plane was surveilling China’s man-made islands in the Spratly Islands in the South China Sea.

So the first issue is that China is demanding an end to American surveillance activities over the Spratly Islands.

The second issue is that the US State Dept. is demanding an end to China’s island-building. According to U.S. Deputy Secretary of State Antony Blinken, speaking in Jakarta last week on Wednesday:

As China seeks to make sovereign land out of sandcastles and redraw maritime boundaries, it is eroding regional trust and undermining investor confidence.

Its behavior threatens to set a new precedent, whereby larger countries are free to intimidate smaller ones, and that provokes tensions, instability and can even lead to conflict.

Comments of this sort are not good for the solving of tensions and are not beneficial for the mutual trust between countries as well as maintaining the peace and the stability of the South China Sea region.

China has been annexing regions in the South China Sea that have historically belonged to other countries, and continues a massive military to enforce its seizures. China has claimed the entire South China Sea, including regions historically belonging to Vietnam, Brunei, Malaysia, Indonesia, Taiwan and the Philippines. China’s claims are rejected by almost everyone outside of China, and China refuses to submit them to the United Nations court deciding such matters, apparently knowing that they would lose.

In recent months, China has repeatedly escalated the military aggression by using land reclamation projects to construct man-made islands for military bases and airports in regions surrounding the Spratly Islands that have previously belonged to Vietnam and the Philippines.

On Thursday of last week, Assistant Secretary of State Daniel Russel said that U.S. naval forces and military aircraft would “continue to fully exercise” the right to operate in international waters and airspace:

Nobody in their right mind is going to try to stop the U.S. Navy from operating – that would not be a good bet.

Well, whether the Chinese military leaders are in their right minds is certainly open to question, but there is little doubt that the Chinese are, at some point, going to take some military action to stop the surveillance flights. Global Times and International Business Times and Al-Jazeera and Reuters

If China is to take the next step in military action against the United States in the South China Sea, one possible direct target would be Global Hawk surveillance drones as they conduct surveillance over the Spratly Islands.

Reports claim that China has tried to electronically jam US drone flights over the South China Sea, in order to prevent ground stations from communicating with the drones. There may be an additional objective of trying to capture a drone by getting it to crash in shallow waters.

Putting on my software engineering hat, I would hope that is not possible. When the Global Hawk takes off from Guam, the software should be programmed to respond to jamming by continuing on a pre-programmed path to continue surveillance and return to Guam.

When Iran captured an American drone by taking electronic control while it was traveling over Afghanistan, I could never understand how that was possible, unless the programmers who wrote the software for the drone had been so sloppy that they didn’t anticipate that possibility. At any rate, let’s hope that there have been “lessons learned,” and that that have been applied to the Global Hawk drones flying over the South China Sea.

However, electronic warfare is not the only possibility. China’s military could shoot down a drone, or could attempt to snatch one in flight using a manned aircraft.

If/when China wants to take the next step with a military action against the United States in the South China Sea, the drones may present an attractive military target. Washington Free Beacon

China’s media describes ‘bottom line’ for war with US

Because of some confusion surrounding this story, I wanted to get more information about China’s analysis of the situation. I went to the original Global Times article in Chinese, and got a machine translation, which is pretty garbled. The following is my attempt to extract key sentences from the machine translation of the original article in Chinese:

When US reconnaissance aircraft flew over the Spratly (Nansha) Islands last week, she was repeatedly warned by China’s navy, raising fears in the strategic community and the public of a possible outbreak of Sino-US military conflict in the South China Sea. How likely is such a military conflict, and how intense will it be?

First of all, provocations from the Philippines and Vietnam, with the support of US troops, make the possibility of Sino-US military conflict larger than in the past.

China cannot make infinitely many concessions [, and so will make no more concessions beyond its bottom line]. Then we will see how the United States sets their own bottom line, and whether the two sides can understand and respect each other’s bottom line.

For China, the most important bottom line is to make the construction of the reefs continue until they are completed.

If the United States’ bottom line is that China has to shut down its construction of the reefs, then a U.S.-China war is inevitable in the South China Sea. The intensity of the conflict will be higher than what people usually think of as ‘friction.’

In addition China has a bottom line, that the United States must respect China’s territorial sovereignty and maritime rights and interests in the South China Sea.

If the US continues to ‘harass’ China with American forces in the South China Sea, but shows restraint, then China will also show restraint.

But if the US military says that China is arrogant, and continues its provocative acts of public humiliation, then a conflict will be difficult to avoid. The Chinese army will fight for dignity.

China’s determination to complete the reefs is very clear and firm. But the strategic goal of the United States is relatively vague. Whether there is peace or war in the South China Sea depends on the United States.

A US military aircraft or warship may use an ‘accident’ to provoke a war. This is like the year before the outbreak of the Vietnam War, when the US concocted a ‘Gulf of Tonkin incident.’

US troops in the South China Sea seem arrogant, but they do not have underlying political and social support. This is clearly up and down the US military, so the Chinese saying, ‘paper tiger’ in fact refers to this situation.

The Global Times is the most nationalistic of government publications, and it does not always reflect official policy, but it does reflect what many in China’s government are thinking.

As I have been saying for years, China has been rapidly building its military for years with a variety of weapons and missile systems that have no other purpose than to preemptively strike American aircraft carriers, American military bases, and American cities. Generational Dynamics predicts that China is preparing to launch a pre-emptive full-scale nuclear missile attack on the United States. There may not be a war tomorrow, but every week or two it becomes apparent that the trend toward war is unmistakable. Global Times (Chinese) (Translation)