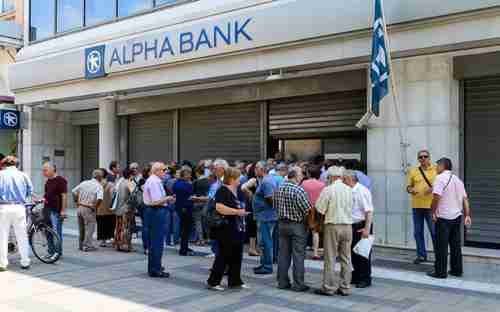 Greeks in Athens wait in line to use the ATM (Kathimerini)

Greeks are deeply divided as they prepare to vote on Sunday on the referendum nominally whether to agree to the lenders’ austerity plan in return for a new infusion of bailout cash.

News reports indicate that Alexis Tsipras’s government has taken over all communications channels, plastering “OXI” (NO) posters all over Athens and broadcasting Tsipras’s speeches constantly. The polls indicate that Greeks are split, 44% for each side, with about 12% undecided. However, some analysts have pointed out that there is so much pressure to vote NO that people may be afraid to say YES to a pollster, which might suggest that many of the undecided voters will actually vote YES in the polling booth. This, in fact, happened in the case of case of the UK’s May poll on Scotland’s independence, where polls completely failed to predict the overwhelming vote to reject independence. ( “9-May-15 World View — Britain’s surprise election and Chaos Theory”)

Some Greeks are using Bitcoins to circumvent the capital controls that have been imposed this week. BTCGreece is the only Greece-based Bitcoin exchange, and thousands of people have been depositing their euros. Then can then transfer the money out of Greece as Bitcoins, which is otherwise illegal.

Thousands of people will be unable to vote because they cannot afford to travel to their home regions, usually where they were born. According to one woman who works in the tourism industry and would have to travel 220 miles from Athens to vote:

Indeed, things may get worse very quickly after the referendum. The chairman of the National Bank of Greece, Louka Katseli, said that Greece’s banks will completely run out of money on Monday evening. “Liquidity is adequate through the end of the bank holiday,” according to Katseli. After that, it will depend on whether the European Central Bank (ECB) will extend more emergency liquidity assistance (ELA), and that may depend on the result of the referendum vote.

Exit polls should start coming out until 7 pm in Athens, or 1 pm ET on Sunday. Final results will probably be available on Monday. Kathimerini and Reuters and Bloomberg

Sunday’s referendum is stirring several historical memories. The country has not held a referendum since 1974, when 69 percent voted against the return of the former king after the fall of a military dictatorship.

However, for many older Greeks, the strongest memory is of Greece’s bloody civil war following the expulsion of the Nazis after World War II. Al-Jazeera’s Athens correspondent John Psaropoulos told how the referendum is stirring memories of the civil for his mother (my transcription):

I came home very late the other night, and had a conversation with my mother, who remembers the civil war, 1946-49, fought in this country between the resistance to German occupation which had been predominately communist, and then after the departure of the German occupation, attempted to seize power by force.

And I said to her what do you think of the NO vote, which would strengthen the ruling left wing Syriza government. She says, I don’t know, I greatly fear another civil war. I remember they did terrible things last time around.

She remembers when her local police station was besieged by the communist forces. The young policemen inside were convinced that if they walked out and surrendered the property, their lives would be spared.

Instead, they were taken to a mountain top which is just to my left here on the outskirts of Athens, and their throats were cut using cans — food cans — opened tins.

This is the sort of brutality that Greece remembers from the civil war. It’s been a taboo subject for many decades, because it split families apart, it split the entire country.

This is the first time that the left wing has been in power, and that was the last time it made a serious bid for power. So people have been connecting the divisive events of 1946-49 with the present. It’s not that Syriza now threatens to take up arms against half the nation, but people are wondering whether people who have made such a violent and ultimately unsuccessful bid for power, and now have come to it with such a great thirst, with a sense of historic vengeance – are capable of wielding it in a way that unites the country, rather than divides it.

From the point of view of Generational Dynamics, this is a very real concern. There have been huge rallies in Athens, with tens of thousands of extremely passionate demonstrators on each side. These rallies have been overwhelmingly peaceful, and no one really expects any violence next week, no matter which side wins the referendum.

But Greece’s economy is a disaster, with no hope of improving for years. Those same opposing rallies, with tens of thousands on each side, could reappear in the weeks to come, and with a lot more venom.

Psaropoulos was asked what he thought would happen after the referendum. He gave a very pessimistic answer:

Well, anything can happen this week. The entire country has been in hiatus for the last 7 days. Because banks have been closed, businesses have been semi-operational, a lot of them have actually sent people home for several days.

Now we’re in a political hiatus as well. We don’t know if the same government will be in office Monday night. We don’t know whether Greece’s creditors will continue to extend any kind of offer of financial assistance, a cash-for-reforms sort of program such as those that Greece has been dependent upon since 2010. Everything for the moment is up in the air. The degree of uncertainty is such that a lot of people are going out and stocking up on food.

An account I spoke to earlier today said, I’m afraid of the NO vote, but then again I know that if we vote yes to this package of austerity measures, none of my clients can possibly do them. 23% VAT on electricity and other utilities, impossible, she said. 100% of next year’s tax income paid in advance this year, in addition to the current tax income – that’s one of the measures on the austerity package going on the referendum tomorrow…

Also impossible, she said. Nobody can possibly do these things.

So I think the best case scenario here is that the Greeks can ultimately come to some sort of deal that they can’t fully honor, and only partially honor. I think those are the terms in which many people are thinking the day following this referendum here in Athens.

These last two sentences are interesting. This is exactly what I described yesterday has been happening all along, since 2010. Greece would promise to implement many reforms in order to get another bailout loan, but then Greece would implement as few of the reforms as possible. This would “kick the can down the road” a few more months, and then the whole cycle would start all over again.

It is interesting that Psaropoulos is putting this out as the best scenario to continue. That would mean that it is being talked about in Athens, and probably in Brussels as well, as the best way to continue, and to “kick the can down the road” once more.

Tunisia declares a ‘state of war’ as Mideast meltdown continues

Two days ago, I reported that leaders of Egypt and Kuwait were declaring that their countries were in a “state of war,” thanks to terrorist activities. This followed terror attacks in Kuwait, France, Somalia and Tunisia on June 26.

Now Tunisia’s President Beji Caid Essebsi on Saturday said that the country was in a “state of war.” He declared a 30-day state of emergency powers. The declaration is linked to the terror attack that struck Sousse, Tunisia, on June 26. A terrorist with a Kalashnikov assault rifle strolled through the hotel grounds, opening fire at the pool and beach, reloading his weapon several times and tossing an explosive. He killed 37 people. There had also been an equally horrific terror attack at a museum in Tunis on March 18, killing 21 tourists and a policeman.

Tunisia faces a very serious danger and it should take any possible measures to maintain security and safety.

Now, we are on a state of war. We have to confront this with what is necessary to fight a war. Undoubtedly, in a way, the armed forces have a role, and they have to be on a state of alert. The national guard, the police. But this war is special.

When Essebsi said that “the country would collapse” if there were another similar attack, he may not have been exaggerating.

The two terrorist attacks specifically targeted foreign tourists, with the result that Tunisia’s tourist industry has already been pretty much wiped out for the year. In this sense, the terrorists have already won. AFP and Reuters and Daily Mirror (London)