With the European Commission President Jean-Claude Juncker dampening expectations of a speedy resolution to the Greek economic crisis, analysts are again giving apocalyptic visions of the country’s future.

PA reports Neil MacKinnon, global macro strategist at VTB Capital, setting out exactly how bad things could get for Greece if a workable solution is not found. He said:

“The Greek economy is in danger not just of imploding but of falling into a nightmarish dysfunctionality where what we consider as the normal economic functions of society collapse. This is a recipe for anarchy and social disorder.”

Despite the high stakes at play President Juncker, talking to MEPs at the European Parliament in Strasbourg, refused to be rushed into a quick decision and appeared to observe a new maxim – ‘bailout in haste, repent at leisure’. He accepts that today’s summit of the 19 eurozone leaders, including Greek Prime Minister Alexis Tsipras and his new finance minister Euclid Tsakalotos, must “restore order to the situation” but notes “a solution is not going to appear overnight”, warning that if one were to do so it would most likely be “overly simplistic”.

The Greeks are expected to bring fresh bailout proposals to the meeting to secure a deal allowing them to retain eurozone status. It may be an uphill struggle as some are still smarting at the referendum campaign’s rhetoric. Juncker warned: “I think it is unacceptable for the European Commission to be deemed terrorists by the Greek government.”

Cracks are appearing between the ranks of senior eurozone members. The French Prime Minister, Manuel Valls, says his country will do everything possible to keep Greece in the eurozone, including rescheduling Greece’s debt. In a radio interview with RTL he said the Greek ‘No’ was not a rejection of the EU values, it was instead an expression of pride. Offering a grandiose interpretation of events he added: “The eurozone must stay coherent, reliable. Europe is not just a currency. It is a conception of the world.”

On the other hand opinion in Germany appears to be hardening against assisting Greece any further. Bild, the country’s biggest daily newspaper, resurrects the spirit of Germany’s champion of 19th century unification, Otto von Bismarck, with the headline: “No new billions for Greece. Today we need the Iron Chancellor.” 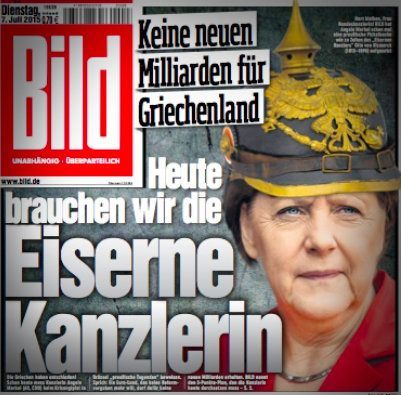 Meanwhile back in Greece the situation continues to deteriorate. The banks have been closed for over a week and today’s reopening has been postponed. ATM withdrawals are still limited to 60 euros a day, however, in reality that figure has been reduced further. Banks have begun to run out of notes valued at 20 euros and below, meaning some are now stuck with withdrawing only 50 euros.