About 80 supporters of the Iran deal gathered for a photo shoot Saturday afternoon in San Diego’s Balboa Park. The photos are to be used in a larger video project, in an effort to push elected officials and the public to support the deal.

The actual photo shoot lasted around 20 minutes, but the San Diego event’s organizer, Alireza Mehrzad, told Breitbart News that it was heldin coordination with several gatherings around the United States and several other countries, including Iran. The photos will be used in a video to support the Iran deal, along with messages of peace, she said.

“I am Iranian-American. The Iranian side of me sees people losing their lives and homes,” Mehrzad said.”

When asked about concerns that Iran will simply wait out the Iran deal and resume its work towards a nuclear weapon, Mehrzad said, “I don’t know what’s going to happen after 10 or 15 years.”

He did say, however: “If not this deal, within a year they will have a nuclear bomb.”

When asked if he believes Iran will comply with the deal despite a history that has indicated otherwise, he said, “I’ll give benefit of doubt to Iran….[Ayatollah Ali Khamenei] agreed with the negotiations. Otherwise he would have gone ahead and developed the bombs.”

He added: “We have to at least give it a chance [the Iran nuclear deal]. If it doesn’t work out, we snap everything back on.”

Mehrzad said he met the project organizers through social media and created Saturday’s event on Facebook. The group posed for several photos, some carrying signs. 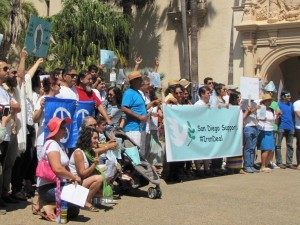 He and a woman who declined to be named were asked about chants in Tehran and throughout Iran of “Death to America.”  The two claimed: “Those are the hardliners.” The woman added, “The leader has been shutting up all the hardliners.” Mehrzad, who came to the United States at age 18, indicated that some protesters are paid. He said he had been approached to protest for money when he lived in Iran.

When asked about Iran’s support for terror organizations, the woman said, “America, backing out of Syria, created ISIS. It came from the heart of people fed up with the government.” She twice mentioned the Green Revolution in Iran, saying that is what brought Iran to the table.

Mehrzad was asked whether sanctions have been effective. He replied, “In my opinion, sanctions–but not unilateral sanctions–brought Iran to the table.”

Mehrzad and the woman said they do not support the Iranian government, but see the deal as the only alternative to war, and want the deal to remove the economic sanctions, saying they hurt the people while government leaders send their children to the U.S. for education and find ways around sanctions for their personal benefit.

Elsewhere on Saturday, a rally in support of the Iran deal in Washington, D.C. drew about 100 supporters.