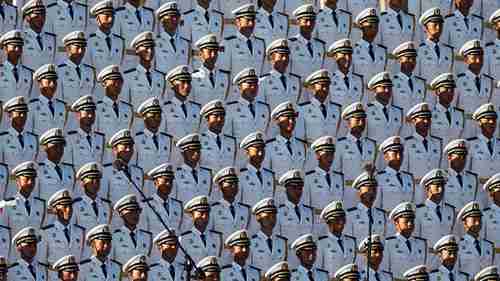 Some of the 12,000 soldiers participating in China’s parade on Thursday (Getty)

Led by China’s President Xi Jinping, the Chinese Communist Party (CCP) put on enormous military display on Thursday for its “Commemoration of the Chinese People’s War of Resistance Against Japanese Aggression and Victory in the World Anti-Fascist War.”

The stock markets have been shut down until Monday, to prevent any embarrassing plunges. The skies were blue, a color rarely seen in Beijing, because all the factories had been shut down for the parade.

Xi Jinping announced that the number of troops in China’s army will be cut by 300,000, and that:

China will remain committed to peaceful development. We Chinese love peace. No matter how much stronger it may become, China will never seek hegemony or expansion. It will never inflict its past suffering on any other nation…

There are one or two things that Xi did not mention. One thing he did not mention is that the size of the army is decreasing from 2.3 million to 2 million, which makes it the largest army in the world.

He also did not mention that while China is reducing its ground forces, it has previously announced huge expansions in its naval forces, as it prepares for war with the United States.

He said that China’s military capabilities would contribute to international peace and security, but he did not mention that China is building military bases on reclaimed land in the South China Sea, and that China is militarily threatening Vietnam and the Philippines, including innocent fishermen who have used these waters to fish for centuries. When Xi says “We love peace,” and “China will never seek hegemony or expansion,” what he means is that China is repeating Hitler’s path in World War II, promising “Peace in our time,” but also annexing other people’s territories. China will be peaceful with any country that acts exactly as the Chinese tell them to do, and China will militarily kill any country that does not.

The more I read about Xi Jinping, the more I conclude that he is delusional. He talks about the “China dream,” which is for China to pass America and to have the most powerful military in the world, especially pushing the United States navy out of the Pacific and Indian oceans. He and many Chinese believe that the United States is becoming weaker every day, and has lost its will to fight. This is the delusion of a man who understands nothing about history but believes that he understands everything.

China is preparing for a pre-emptive attack in the belief that they will win the war quickly, which makes Xi Jinping and the Chinese people as stupid as Hitler and the Nazis. History’s greatest disasters are brought about by the stupidest and most delusional people, and this time the stupidest and most delusional people are Xi Jinping and the Chinese. Those Chinese who survive will deeply regret their almost unbelievable stupidity, as they go down in history as worse than the Nazis.

War is like a mirror. Looking at it helps us better appreciate the value of peace. Today, peace and development have become the prevailing trend, but the world is far from tranquil. War is the sword of Damocles that still hangs over mankind. We must learn the lessons of history, and dedicate ourselves to peace.”

Xi and the Chinese prove every day that they have absolutely no clue what the lessons of history are.

At the end of the parade, 70,000 white doves were released, followed into the skies by thousands of colorful balloons Xinhua and Independent (London)

For Thursday’s parade, there were hundreds of tanks, nuclear-capable ballistic missiles, drones, fighter jets, with 12,000 goose-stepping soldiers rolling through Tiananmen Square in Beijing. One of the highlights was the “Flying Shark,” the J-15 long-range, multi-purpose carrier-borne fighter jet.

Also displayed was the Dongfeng-5B or ‘East Wind 5’ intercontinental strategic nuclear missiles, which has an estimated range of 12,000 to 15,000 kilometers, and is designed to target American cities.

The star of the show was the Dongfeng-21D anti-ship ballistic missile touted as a “carrier killer,” which was paraded for the first time. The missile is specifically designed to target American aircraft carriers.

China has not seen any military conflict since it was defeated in a 1979 war with Vietnam, and so it has no battlefield experience using the equipment put on display. According to one analyst:

The biggest problem for the [People’s Liberation Army] is integrated warfare, which it has never experienced before. Integration is essential in modern warfare. …

[China’s military] has a problem integrating the navy and the air force because of its rigid hierarchy, inter-service rivalries and lack of decision-making powers at the command level.

China’s display of belligerence and raw military power, taking place in Beijing’s Tiananmen Square– the sight of the brutal, bloody 1989 massacre of thousands of college students– to celebrate the 70th anniversary of the “Victory of the Chinese People’s Resistance Against Japanese Aggression and the World Anti-Fascist War,” was snubbed by many world leaders.

Russia’s president Vladimir Putin was there, returning the favor from when Xi Jinping attended Russia’s WWII victory parade in May. Xi stressed the importance of close relations with Russia, and Putin said he was deeply impressed by the grand commemoration and military parade.

South Korea’s President Park Geun Hye was there, but North Korea’s leader Kim Jong-un was not. Kim had been invited, but he demanded as a condition for attending that he sit next to Xi Jinping on the reviewing stand. Instead, the Chinese placed him off to one side. So the child dictator snubbed the event and refused to attend at all. China reversed the snub by scheduling talks between Xi and South Korea’s president Park.

Western countries, including the U.S., France and Britain, sent former ministers. But Germany was represented only by its ambassador.

The failure to attract more world leaders was not a disaster for Xi Jinping, but it was not a triumph either, and was a big disappointment. Deutsche Welle and Xinhua and Yonhap (8/24) (Seoul)

China sends warships to Bering Sea off the coast of Alaska

To further demonstrate China’s belligerent intentions towards the United States, five Chinese warships have been sailing in international waters in the Bering Sea near Alaska.

The visit by the warships coincided with President Barack Obama’s visit to Alaska earlier this week, and they are part of Thursday’s victory parade to show how China plans to expand militarily in the Pacific Ocean. Reuters and Shanghaiist

Movie poster for the Chinese film ‘The Cairo Declaration,’ depicting Mao instead of Chiang Kai-shek

China accuses Japan for rewriting some of World War II’s history, but China is not shy about doing its own rewriting, when it is convenient.

Xi Jinping on Thursday bragged about how the forces of China’s Mao Zedong had been an important and underappreciated factor in defeating Japan in World War II. However, it wasn’t Mao’s forces that fought the Japanese. For the most part, it was Chiang Kai-shek’s forces that bore the brunt of the fighting. Mao held back his forces, and then used them to defeat Chiang in the civil war that followed WW II in 1945-49.

Last month, China released a film called The Cairo Declaration, recreating a 1943 conference in Cairo by Allied leaders, including President Franklin D. Roosevelt and British Prime Minister Winston Churchill, to discuss strategy for defeating the Nazis and Japanese. The poster for the movie shows a picture of the actor who plays Mao Zedong, but Mao didn’t even attend the meeting. China was represented by Chiang Kai-shek.

According to one art critic, “By featuring Mao, who was not present at the meeting, but excluding Chiang, the poster shows no respect for history nor to Mao.” Military.com