Thousands of cars in China stuck in week-long traffic jam 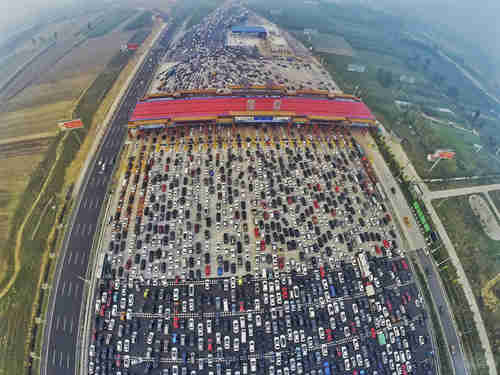 Vehicles stuck in week-long traffic jam on 30-lane highway as they approach a toll booth near Beijing. (Reuters)

Thousands of families in China, returning to Beijing at the end of a week-long national day holiday, are now stuck in a week-long traffic jam. As the cars approach Beijing, the 30-lane highway narrows to fewer than 10 lanes at a toll booth. Russia Today

The security situation has deteriorated dramatically over the past week in the West Bank, including East Jerusalem. Four Israelis and five Palestinians have already lost their lives, while hundreds of others have been injured. More bloodshed will only lead to more hatred on both sides, and offer no solution in the long run.

The violence is spreading rapidly across the entire West Bank. In the past week, violent clashes between Palestinians and Israeli security forces have been reported in more than 50 different locations, including in East Jerusalem, Ramallah, Hebron, Bethlehem, Jenin, Tulkarm and Nablus.

The escalating tensions indicate a general sense of growing frustration and despair resulting from the situation of prolonged occupation, exacerbated by recent restrictions imposed by the Israeli authorities on Palestinian worshippers wishing to access the Al-Aqsa [and Temple Mount] compound, the ongoing settlement expansion and settler violence, and a general lack of accountability in cases such as the Duma arson attack.

Although both Palestinians and Israelis have contributed to the the violence, Al-Hussein mostly ignored Palestinian incitement and assigns almost all of the blame to the Israelis, and particularly mentioned the Duma arson “price tag” attack by Israeli settlers. ( “1-Aug-15 World View — Tensions with Palestinians soar after brutal Israeli settler ‘price tag’ attack”)

Despite the efforts of Palestinian Authority President Mahmoud Abbas and Israel’s Prime Minister Benjamin Netanyahu to calm the situation, the amount of violence between Palestinians and Israelis in the West Bank has increased significantly in the last two weeks.

In just the last couple of days, several Israelis were stabbed by Palestinians, and some Palestinians were killed by Israeli security forces.

Netanyahu was scheduled on Thursday to fly to Germany for events commemorating 50 years of diplomatic relations between the two countries, but had to cancel the trip because of the wave of violence. “We are still in the midst of a wave of terror. We are taking strong action against terrorists, rioters and inciters,” said Netanyahu.

Jerusalem has been the epicenter of the violence, where police since mid-September have arrested at least 270 Palestinians suspected of taking part in riots and rock and firebomb attacks. Violence in the Temple Mount/Al-Aqsa Mosque compound in Jerusalem is extremely sensitive. Temple Mount is the holiest site in the Jewish religion, and the Al-Aqsa Mosque is the third holiest site in Islam, after Mecca and Medina. Al Monitor and United Nations and LA Times

As we reported two days ago, there is a big generational component to the increasing West Bank violence.

Ever since they were born, young Palestinians in their teens and early twenties have been listening to talk about negotiations for a two-state solution, but they see nothing ever change, and they do not believe that negotiations will ever change anything.

The older Palestinians, their parents, remember the first intifada and the second intifada, and although there was a great deal of bloodshed, violence did not accomplish anything more than negotiating did. So the older Palestinians do not see the point in any more violence, or a third intifada.

As we have been saying for years, Mahmoud Abbas is 80 years old (born in 1935), and is the only remaining major leader from the generation of survivors of the genocidal 1948 war between Jews and Arabs that followed the partitioning of Palestine and the creation of the state of Israel. Abbas, more than anyone, knows that a third intifada could quickly spiral into a major war. He also knows that a major war will bring about enormous bloodshed and suffering for millions of people and, like negotiating or an intifada, will not accomplish anything.

Still, it is not clear how long Abbas can keep the top on the pressure cooker. He is widely respected for his service to Palestinians, but young people increasingly consider him to be largely irrelevant.

According to unnamed U.S. officials, four of the missiles did not reach their targets, but crashed in Iran.

Iran did not confirm the report, but Iran’s news media reported that “an unknown flying object” had crashed in the village of Ghozghapan in the Iranian province of West Azerbaijan, said to be under the missiles’ flight path. BBC

There were 40,000 dengue fever infections in Vietnam during the first nine months of the year, with 25 deaths, and the outbreak has not showed any sign of winding down. Ho Chi Minh City (Saigon) had the highest number of infections, 10,000. Doctors said the mosquito-borne disease has a cyclical pattern and tends to become very severe after three to five years. Thanh Nien News (Saigon)