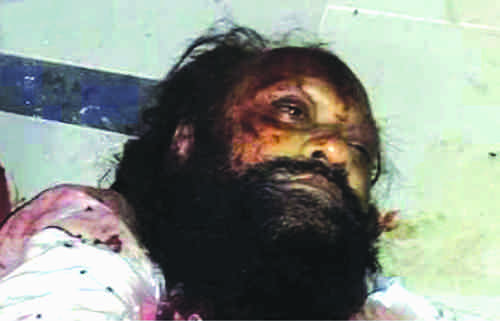 On October 22, a suicide bomber blew himself up at a Shia mosque in Balochistan in southwest Pakistan as worshippers were gathering, killing 10 Shia Muslims. On October 23, 27 Shias were killed and dozens wounded in a suicide attack on a Shia procession in a city north of Karachi.

The Sunni terror group Lashkar-e-Jhangvi (LeJ) claimed responsibility for both attacks. I have written about LeJ many times. The group is dedicated to the extermination of all Shias in Pakistan, especially Shias in the Hazara ethnic group. In June 2011, LeJ wrote an open letter to the Shia Hazaras, declaring:

Our mission [in Pakistan] is the abolition of this impure sect and people, the Shias and the Shia Hazaras, from every city, every village, every nook and corner of Pakistan. Like in the past, [our] successful Jihad against the Hazaras in Pakistan and, in particular, in Quetta is ongoing and will continue. We will make Pakistan their graveyard — their houses will be destroyed by bombs and suicide bombers… Jihad against the Shia Hazaras has now become our duty… We will rest only after hoisting the flag of true Islam on the land of the pure – Pakistan.

Officials in Pakistan are increasingly concerned that the so-called Islamic State (IS or ISIS or ISIL or Daesh) has established or is establishing a foothold in Pakistan. Questions have also arisen about whether Pakistani terrorists groups might have participated in anti-Shia terrorist attacks in Saudi Arabia and Kuwait.

Recent evidence has emerged that Lashkar-e Jhangvi (LeJ) has had a working relationship with ISIS, and almost became a full-fledged branch of ISIS in Pakistan.

In May, we reported on a horrific attack on Ismaili Shias in Karachi. Terrorists in Karachi attacked a bus full of Ismaili Shias, killing 45, and left behind leaflets accusing Shias of “barbaric atrocities,” and warning of the “Advent of the Islamic State!”

At the time of the attack, Pakistani officials ruled out ISIS involvement. But since then, evidence has emerged that the attack was conducted by LeJ working with ISIS.

The link to ISIS was LeJ’s leader, Malik Ishaq. According to new evidence, Ishaq was all set to join ISIS in August. But as we reported on July 29, LeJ’s leader Malik Ishaq was killed in gunfight, along with 13 others including his two sons, while he was in police custody. It is believed that the gunfight was a setup by the police to allow them to kill Ishaq, rather than return him to jail.

It is not known whether LeJ has continued to develop links with ISIS, but Pakistani officials now say that Ishaq’s death has ended the possibility of LeJ becoming a branch of ISIS, for the time being. Express Tribune (Karachi) and OpEd News

History of sectarian violence in Pakistan since Partition

One of the worst wars of the 20th century was the bloody genocidal war between Hindus and Muslims that followed Partition, the 1947 partitioning of the Indian subcontinent into India and Pakistan. The scale of civilian displacement from their homes was so massive that it was called by some an “exodus of biblical proportions,” since it forced millions of Hindus in Pakistan to flee to India, and millions of Muslims in India to flee to Pakistan.

At the time of the Partition war, Muslims in the new state of Pakistan were generally united against the Hindus, and sectarianism among the Muslims was not a major issue at that time.

However, Hindus and Shia Muslims have been allied in wars against Sunni Muslims since the seminal Battle of Karbala in 680. So the fact that there was an alliance of convenience between Sunni and Shia Muslims in 1947 does not mean that such an alliance was going to last.

There were incidents of sectarian strife during the generational Awakening era in Pakistan, and they began to become serious in 1979, and have escalated continuously since then. At that time, Pakistan’s government introduced “Islamicisation” of Pakistan. Shia Muslims resisted this process, calling it the “Sunnification” of Pakistan, since based on Sunni law. The more Shias protested, the more they were targeted.

The first suicide attack against Shias was carried out in July 2003 when three armed terrorists, including a suicide bomber, attacked a Shia mosque in Quetta, the capital of the Balochistan, during Friday prayers, leaving 53 dead and 57 others critically injured.

The same is the story of all non-Sunni Muslim minorities in Pakistan, including Christians. These minorities are targeted not only by LeJ, but also other terrorist groups associated with Tehrik-e-Taliban (TTP – Pakistan Taliban).

The question always arises — why does Pakistan’s government not put a stop to these attacks? The reason, according to many Indian analysts but denied by Pakistani politicians, is that the country is not being run by the civilian government, but by the army and by Pakistan’s Inter-Services Intelligence (ISI) agency, and that the ISI is actually funding and supporting LeJ and other TTP-linked terrorist groups to perform these terrorist attacks. Hudson Institute and South Asia Terrorism Portal (SATP) and Daily Times (Pakistan)