Brussels, Belgium on lockdown in search for Paris bomber 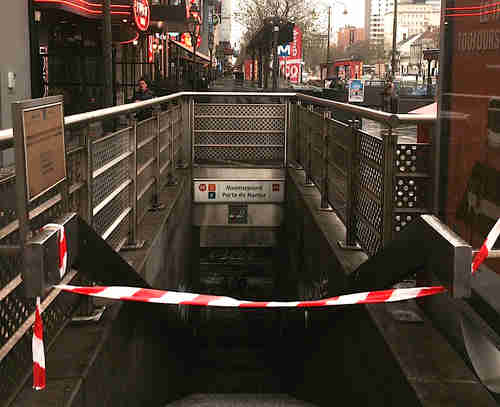 On Saturday, the city of Brussels, which is both the capital city of Belgium and the capital of the European Union, was essentially shut down completely, after Belgium’s Prime Minister Charles Michel warned that the threat of one or more terror attacks in the city was “serious and imminent.” The terror alert system was raised to its highest level over reports of an “imminent threat” of a gun and bomb attack similar to the one seen in Paris. The metro system was shut down, and all restaurants and cafés were closed by 6 pm. Citizens were warned to avoid large gatherings such as concerts, train stations and shopping malls.

Belgium-based jihadists are increasingly at the heart of the investigation of last week’s Paris attacks, since it has been learned that three of the attackers have roots in Brussels’ Molenbeek district which, as we described earlier this week, has a large ethnic Moroccan population and is a hotbed for radical Islamists.

Brussels police have intensified raids in Molenbeek and other immigrant districts, hoping to prevent a repeat of the Paris attacks. Belgium’s interior minister is calling for house-to-house checks for all homes in Molenbeek.

In particular, there is a big manhunt under way for Salah Abdeslam, a 26-year-old French citizen, who is believed to be one of the attackers and is hiding out in Brussels. Abdeslam traveled from Paris to Belgium on the morning after the Paris attacks and was stopped by police officers for identity checks, but was permitted to continue to Belgium because he was not suspected at that time.

Police have issued an international arrest warrant for Abdeslam, who is described as armed and dangerous. Friends of Abdeslam told ABC News they had spoken to him on Skype and said he was hiding in Brussels and desperately trying to get to Syria, to link up with the so-called Islamic State (IS or ISIS or ISIL or Daesh). Expatica Belgium and EU Observer and BBC and ABC News

I have often suggested that the National Rifle Association in the U.S. should give an award to President Barack Obama. Every time President Obama proposes gun control legislation, gun sales surge. President Obama has brought about the sales of more guns than the NRA ever could.

So now there is talk of gun control in the European Union.

There is a black market for firearms in all major European cities. However, Belgium is a particularly important player because of its geographical location and history. For centuries, Belgium has been a major producer and exporter of firearms. Sixty miles east of Brussels, FN Herstal, the largest small-arms factory in Europe, has been making weapons since 1889. Today, three thousand employees manufacture some fifty models of handguns, submachine guns, rifles (both assault and bolt-action), machine guns, shotguns, and aircraft weapons systems.

Handguns are the preferred firearm for criminals, but lately Belgian police have noticed an increase in the possession and use of military-style weapons such as Kalashnikovs. After the Balkan wars of the 1990s, hundreds of thousands of military weapons stayed in the hands of citizens and found their way to Western Europe, including Belgium. A typical price for a weapon is $1,000 to $2,500.

It is estimated that there are 81 million illicit firearms across the European Union, but that is just a guess because the EU has no system for keeping track of weapons, even illegal weapons that have been seized.

The EU this week proposed new gun control rules. But experts say implementing them across the 28 member counties would be difficult.

Some of the rules have to do with the restoration of deactivated or neutralized or decommissioned weapons, a problem not raised much in the United States. An otherwise illegal weapon can be kept legally if it can be deactivated and made into a purely decorative item. Key components can be removed or welded together, for example, but in some cases deactivated weapons can be restored.

The new proposed rules will deal with deactivated weapons, and will propose a ban on semi-automatic weapons. However, none of the proposals offer immediate solutions to the problem of improving coordination and information sharing among law enforcement so guns can be more easily tracked.

Nonetheless, the proposed rules face strong resistance from hunters and sportsmen, who fear it will seriously restrict legal owners. “It seems to be that the Commission now wants to show quick activism after these terrible attacks, but they are going too far,” said Hans Schollen, a lawyer and president of a German sporting association, the VDS. BBC and Politico EU and New Yorker