In a text that is coursing about on social media, professional God-slayer Richard Dawkins begrudgingly admitted that Christianity may actually be our best defense against aberrant forms of religion that threaten the world.

In a rare moment of candor, Dawkins reluctantly accepted that the teachings of Jesus Christ do not lead to a world of terror, whereas followers of radical Islam perpetrate the very atrocities that he laments.

Because of this realization, Dawkins wondered aloud whether Christianity might indeed offer an antidote to protect western civilization against jihad.

“I have mixed feelings about the decline of Christianity, in so far as Christianity might be a bulwark against something worse,” he said. 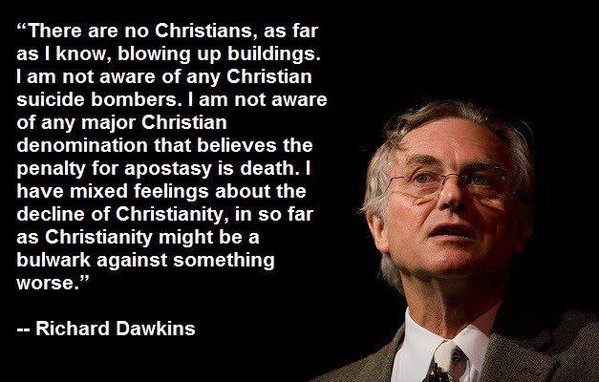 Although the text originated in 2010, it has taken on a second life, being sent to and fro on Facebook and Twitter and providing fodder for discussions, even among atheists, of the benefits of Christianity for modern society.

Dawkins was trained as an evolutionary biologist, but achieved his greatest celebrity not through biology but through his pop atheism, regularly debating theists in public and penning diatribes against God and faith.

For a generation of young atheists, Dawkins gave disbelief a thin veneer of intellectual cachet and offered a justification for the belief that atheism was somehow grounded in science.

In his 2006 bestseller, The God Delusion, Dawkins famously compared religious education to the sexual abuse of children, concluding incredibly that the latter was actually preferable to the former.

Referring to the clerical sex abuse crisis, Dawkins wrote that as “horrible as sexual abuse no doubt was, the damage was arguably less than the long-term psychological damage inflicted by bringing the child up Catholic in the first place.”

Faced with the suicide bombers and child rapists of radical Islam, however, Dawkins finally found something that he thought was worse.