Recently liberated Ramadi citizens are telling media the Islamic State (ISIS/ISIL) tortured them and used them as human shields when Iraqi forces moved into the city.

“They took us to many places,” exclaimed one woman. “They later told us to go to the front, but inspected us before leaving.” 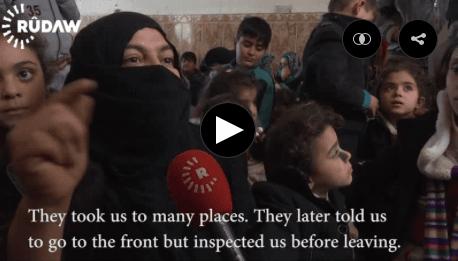 Ramadi female tells Rudaw what the Islamic State did to the families.

The Islamic State forced out Iraqi forces in Ramadi in mid-May 2015. The militants stole weapons and captured the military headquarters. They then murdered anyone “loyal to the government.”

“All the families in Ramadi were like captives,” she said. “ISIS tortured men in a way that they cried like women.”

Not all Ramadi citizens escaped the Islamic State upon the liberation of Ramadi. “My mother is captured by ISIS,” cries one woman on camera. “Please tell me where my mother is.” 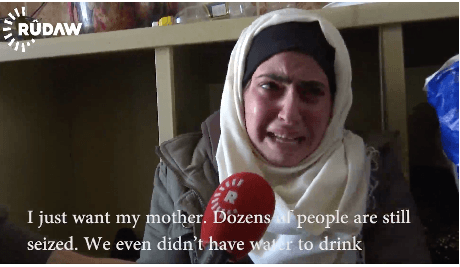 Another Ramadi citizen wants to be reunited with her mother.

As she wept, the woman begged the Rudaw crew to take her to her mother.

“I just want my mother,” she continued, after she regained her composure. “Dozens of people are still seized. We even didn’t have water to drink.”

As Iraqi forces moved in during December, the Islamic State grew paranoid and used the civilians as human shields. One man said the militants forced people to remain in their houses and could only leave with permission.

“We feel like we’re living inside a sealed casket,” described Abu Ahmed.

“They come to the house and take the children and accuse them of being spies,” stated another source. “If the mom cries and gets upset at them, they accuse of her [sic] being a spy too and take her to the jail and later kill her.”

The forces liberated Ramadi from the Islamic State in late December.

“The clearance of the government center is a significant accomplishment and is the result of many months of hard work by the Iraqi Army, the Counter Terrorism Service, the Iraqi Air Force, local and federal police and tribal fighters,” declared Col. Steve Warren, the spokesman for the U.S.-led coalition against the Islamic State.

However, the forces insisted the area is not 100% safe. They withdrew 635 residents to nearby Habbaniyah, but there are many areas that still contain terrorists. The officials arrested 12 alleged militants who attempted to escape by blending in with the civilians.

But the militants who did escape received a literal fiery welcome when they arrived in Mosul.

“They were grouped together and made to stand in a circle and set on fire to die,” a former resident told Fox News.

Terrorism expert Michael Pregent said it is normal for the Islamic State to execute fighters who lose valuable territories. They did the same thing when militants lost Tikrit.

“They continue to lose territory, we’ve seen a growing number of defections and a rise in the number of alleged internal spies – many of whom they have killed mercilessly without demonstrating significant evidence of internal espionage,” said Clint Watts, Fox fellow of the Foreign Policy Research Institute, adding: