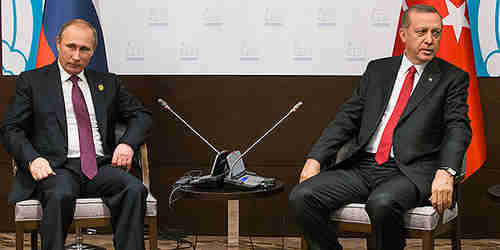 Vladimir Putin and Recep Tayyip Erdogan at their last ‘friendly’ meeting, on November 16, a week before Russia’s warplane was shot down over Turkey (AP)

Russia is denying as “baseless propaganda” a claim by Turkey that Russia has once again violated its airspace, this time with an SU-34 bomber on Friday. According to a statement appearing on the web site of Turkey’s Ministry of Foreign Affairs:

Before the violation actually took place, Russian plane was warned numerous times by Turkish air radar units, (through appropriate channels) both in English and Russian languages.

Despite several previous explicit statements of warnings by both Turkey and NATO, this new violation is yet another concrete example of Russian escalatory behavior.

We once again explicitly call on Russia, to act responsibly and not to violate Turkish Airspace, which is NATO airspace. We underline that such actions could lead to serious consequences, the responsibility of which will totally rest with the Russian Federation.

Turkey’s president Recep Tayyip Erdogan accused Russia of purposely trying “to escalate the crisis in the region,” and added that “If Russia continues to violate Turkey’s sovereignty, it will have to face the consequences.” Erdogan also pointed out that Turkey is a member of Nato, but did not specify what “the consequences” would be.

This is the latest in a series of increasingly hostile acts between Turkey versus Russia and its ally Syria. In June, 2012, Syrian forces shot down a Turkish air force jet. On September 16, 2013, Turkey scrambled two F-16 jets, and shot down a Syrian Russian-made Mi-17 helicopter, after warning it that it was approaching Turkish airspace.

Turkey’s rules of engagement apply to all planes, be they Syrian, Russian or from elsewhere. Turkey’s armed forces have very clear instructions. The necessary steps will be taken against whoever violates Turkey’s borders, even if it’s a bird.

Then on November 24 of last year, two Turkish F-16s were involved in the shooting down of a Russian warplane in Syria near the border with Turkey. According to Turkey’s military, the Russian aircraft was warned 10 times in five minutes that it was violating Turkish airspace. ( “25-Nov-15 World View — Turkey shoots down Russian warplane, evoking memories of many Crimean wars”)

Russia and Turkey have been bitter enemies for centuries in several generational crisis wars, especially after 1783, when the Russian armies captured Crimea in what was the Ottoman empire’s first significant loss of Muslim territory, and then again in the Crimean War of the 1850s.

Since the November 25 shootdown of the Russian warplane, Russia has become increasingly hostile and threatening to Turkey, not only imposing harsh and increasing economic sanctions on Turkey, but also forcing other nations in the regions to choose sides between Turkey and Russia. ( “21-Jan-16 World View — Azerbaijan forced to choose between Russia and Turkey”)

So this new incident of Russia violating Turkey’s airspace is not the trivial incident that it might otherwise seem to be. Turkey and Russia seem very close to war as it is, especially since the Russians have continually expressed nothing but contempt for Turkey, implying that Russian warplanes can do what they want.

Turkey, on the other hand, is committed to a highly nationalistic view of responding to any Russian incursion, even one that’s harmless. When Davutoglu says that the rules of engagement have been determined, it implies that the next Russian incursion will be met with a missile launched without requiring further permission from the government in Ankara. AP and Turkey Ministry of Foreign Affairs and Russia Today and CS Monitor and Daily Sabah (Turkey)

The English language becomes an issue between Turkey and Russia

Before the violation actually took place, Russian plane was warned numerous times by Turkish air radar units, (through appropriate channels) both in English and Russian languages.

In denying the incident, Russian Defense Ministry spokesman Major General Iror Konashenkov denounced the claim that Russian pilots had been warned “in English and Russian” as a story made up by “ignorant propagandists who watched too many Hollywood action movies.”

After the Russian warplane shootdown in November of last year, Turkey’s military said that the Russian aircraft was warned 10 times in five minutes that it was violating Turkish airspace. Russia denied that any such warnings had been issued.

It emerged later that Russian military pilots are not required to learn English. English is a requirement for civilian flights around the world. For example, if a Russian civilian pilot were landing his plane in Saudi Arabia, in most cases the Russian pilot would not know Arabic and the Saudi air controllers would not speak Russian, and so they would communicate in English as a common language. However, there is no such requirement for military pilots.

According to Russian military media:

An active military pilot who asked not to be named told the Voennoe.RF [Russian military news] reporter that English language proficiency was not a necessary condition for service in the Russian Airspace Force. “Yet it’s not obligatory”, he said having added that there were neither language courses nor interim assessments.

That was also confirmed by other officers and engineers of the Russian Airspace Force. “The main things are good health and general erudition”, emphasized one of them.

This gave rise to the possibility that Turkey had, in fact, warned the Russian aircraft 10 times in five minutes, but that the Russian pilots were ignorant of English and didn’t understand the warnings.

So Saturday’s statement from Turkey emphasized the fact that “the Russian plane was warned numerous times… both in English and Russian languages.” In response, Russia’s Defense Ministry mocked the “English and Russian” claim as a story made up by “ignorant propagandists who watched too many Hollywood action movies.”

I’m not sure how to interpret the Russian statement since, of course, Hollywood action movies are generally in English. Mil.today (Russia, 21-October-2015) and Russia Today