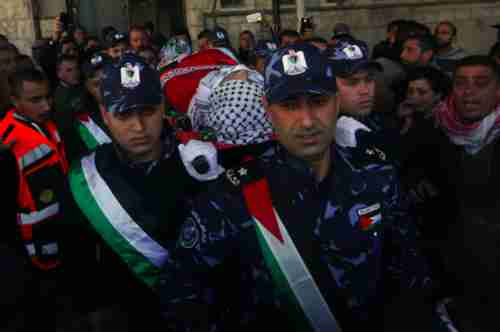 Palestinian Authority (PA) police are praising the martyrdom of their colleague, Amjad Sukkari, a 34-year-old policeman who worked as a bodyguard for the Palestinian attorney general, who was shot dead by Israeli troops on Sunday morning after he opened fire on the soldiers at a checkpoint, injuring three.

Thousands of people took to the streets on Monday for Sukkari’s funeral after Israeli forces released his body just a few hours after the shooting. Two of Sukkari’s brothers, both Palestinian police officers, carried the casket from the hospital to the city’s martyrs cemetery as crowds waved flags and chanted “martyr.”

Palestinian Authority (PA) officials did not participate in the funeral and have refused comment on the matter.

However, officials from Hamas and Islamic Jihad publicly endorsed his actions and called them a natural reaction of occupation. According to a Hamas spokesman, “This attack showcases the rejection of security coordination with the occupation, even among members of the PA security forces.”

The Hamas statement signals a possible turn of events that could be extremely dangerous.

There is a long-term agreement between PA and Israel to coordinate security. Thus many potential terrorist attacks on Israelis are prevented by the PA security forces. According to an Israel’s defense minister Moshe Ya’alon, the PA foils 20% of organized terrorism by Hamas and Islamic Jihad, while Israel thwarts the remaining 80%.

Obviously, this kind of security coordination between Israel and the PA is bitterly opposed by Hamas and Islamic Jihad.

Now, the Palestinian police eulogizing the “brave martyrdom” of their fellow policemen Sukkari suggests that the PA security forces themselves are opposed to any security cooperation with Israel.

A campaign of stabbings, shootings and car-rammings by Palestinians has killed 26 Israelis and a U.S. citizen since the start of October. Israeli forces have killed at least 153 Palestinians, 99 of them assailants according to Israeli authorities.

As we described last year ( “18-Oct-15 World View — Palestinian ‘Oslo Generation’ relationship with Israel extremely toxic and explosive”), there has been a significant change in attitudes in the West Bank, especially young people who grew up after the 1993 Oslo accords between Israel and the Palestinians. They are reacting to the fact that, in 23 years since the accords, there have been no changes to the Israeli occupation of the West Bank. They have decided that there is no longer any hope of a two-state solution, and they are looking for a new leader, someone who will “get things done” with the Israelis, using whatever tactics are necessary.

The violence between Palestinians and Israelis in the West Bank has been growing steadily, and there is a fear that Sunday’s attack could trigger a new escalation in violence, this time involving the PA peacekeeping forces themselves. Jerusalem Post and Reuters and Middle East Eye and Jerusalem Post

France said on Friday it intended to make another push at trying to resolve the Israeli-Palestinian conflict and warned that if its efforts failed, it would recognize a Palestinian State. According to France’s foreign affairs minister Laurent Fabius:

France will engage in the coming weeks in the preparation of an international conference bringing together the parties and their main partners, American, European, Arab, notably to preserve and make happen the two-state solution.

[If this attempt fails, then] in this case, we need to face our responsibilities by recognizing the Palestinian state. […]

We see that unfortunately colonization continues and that recently, the Israeli Prime Minister went so far as to reproach the UN Secretary General for encouraging terrorism on the basis that he had reminded of colonization’s illegality and asked that it cease

Netanyahu said that Israel did not reject Fabius’s proposal for renewed talks, but said that France’s ultimatum was “an incentive to the Palestinians to come along and not compromise.” He added:

I assess that there will be a sobering up regarding this matter. In any event, we will make effort so that there is a sobering up here, and our position is very clear: We are prepared to enter direct negotiation without preconditions and without dictated terms.

However, senior Israeli officials reportedly responded off the record with sarcastic remarks, such as: “Will France be calling for an international conference with the Islamic State, too? It has, after all, been conducting terrorist attacks on French territory.”

When President George Bush announced his “Roadmap to Mideast Peace” in 2003, I wrote that the Mideast peace plan would not be implemented, because Israelis and Palestinians would be refighting the 1948 genocidal crisis war that followed the partitioning of Palestine and the creation of the state of Israel. In that article, I said that Palestinian leader Yasser Arafat and Israeli leader Ariel Sharon hated each other but, consciously or unconsciously, they were cooperating to prevent an all-out war, because they both survived the bloody 1948 war and did not want it to happen again.

There have been several attempts at Israeli-Palestinian peace talks, including two or three by the Obama administration, and they have always been disastrous failure. There is absolutely no reason to believe that the new French initiative will fare any differently. The only question is: When it fails, how bad will the disaster be? France 24 and Al Arabiya and France 24 and Al Monitor