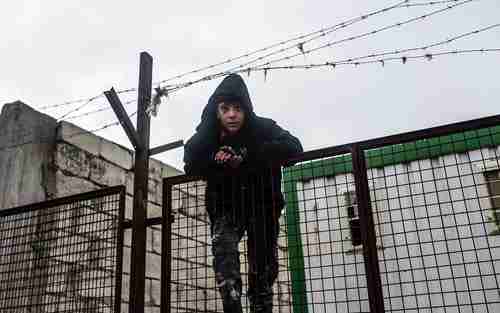 As Syrian regime forces and Russian warplanes continue to pound civilian targets in Aleppo and cut off supply routes, people fleeing Aleppo will not be permitted to cross the border into Turkey, according to Süleyman Tapsiz, the governor of Turkey’s Kilis province, which borders Syria. Tapsiz says that 35,000 people are already massed on the border with Turkey, and 70,000 more are expected in the next few days.

“Our doors are not closed, but at the moment there is no need to host such people inside our borders,” said Tapciz. Refugees are being directed to refugee camps on the Syrian side of the border, and they are being given food, blankets and tents. AFP and Cihan (Turkey) and Reuters

EU foreign policy chief Federica Mogherini urged Turkey on Saturday to reopen its border to “Syrians in need for international protection,” and allow tens of thousands of Syrian refugees to come to Turkey to seek asylum. Mogherini that “the support that the EU is providing to Turkey, among others, is aimed exactly at guaranteeing” that Turkey can protect and host people that are seeking asylum.

As Syrian regime forces encircle Aleppo with the help of massive Russian warplane airstrikes, it is believed that are remaining in Aleppo because they have no place to go, and that hundred of thousands more civilians would flee north to Turkey if they believed that they could cross the border.

Also on Saturday, another EU official, European Commissioner Johannes Hahn, said that Turkey must slow down the flow of refugees from Turkey into Greece, something that Turkey has failed to do, despite a November 29 deal to reduce the flows. According to Hahn:

This action plan was agreed more than two months ago and we are still not seeing a significant decline in the number of migrants, Turkey could do more, I have no doubt.

On November 29, the EU has agreed to give Turkey 3 billion euros ($3.2 billion) to keep Syrian refugees on its soil in return for an acceleration of the EU accession talks and speeded-up visa liberalization for Turks visiting Europe.

Europe’s message is even more confusing because it is losing control of its own borders. Earlier this week, the EU said Greece had to re-establish full control over its border with Turkey. According to Hungary’s foreign minister, Peter Szijjarto: “If Greece is not ready or able to protect the Schengen zone and doesn’t accept any assistance from the EU then we need another defense line, which is obviously Macedonia and Bulgaria.”

The Schengen zone is a group of 25 European countries that permit visa-free border crossings among them. Free travel between countries is considered to be a right that is at the core of European Union. However, the Schengen zone is already in trouble because of the flood of refugees. Six Schengen members, including Germany and four other EU countries, have resorted to reinstating temporary border checks, at least until May. AP and Zaman (Ankara) and Guardian (London)

As we reported two days ago, Saudi Arabia announced that it is ready to send ground troops into Syria to fight the so-called Islamic State (IS or ISIS or ISIL or Daesh). The announcement was apparently triggered by Russia’s massive bombing of Aleppo.

Theoretically, Russian warplanes are fighting ISIS, but in fact they are leaving ISIS completely untouched and are carpet bombing civilians linked to moderate opposition to Syria’s president Bashar al-Assad. The same is also true of Syrian troops and Iranian troops.

So even though the Russians, Syrians, Iranians and the Saudis all talk about fighting ISIS, they are actually going to be fighting each other. And if Turkey enters the fray, which is certainly possible, then we will have a full-scale regional sectarian war in progress, with Russia, Syria and Iran fighting Saudi Arabia and Turkey.

Now both Iran and Syria are turning up the nationalistic fury by ridiculing and insulting Saudi Arabia’s army.

They claim they will send troops (to Syria), but I don’t think they will dare do so. They have a classic army and history tells us such armies stand no chance in fighting irregular resistance forces.

This will be like a coup de grace for them. Apparently, they see no other way but this, and if this is the case, then their fate is sealed.

Any ground intervention on Syrian territory without government authorization would amount to aggression that must be resisted.

Let no one think they can attack Syria or violate its sovereignty because I assure you any aggressor will return to their country in a wooden coffin.

The mocking and ridicule did not stop there. Maria Zakharova, the spokesman for Russia’s foreign ministry, treated the reports with sarcasm: “I’m afraid to ask, have they already defeated everybody in Yemen?” CNN and Russia Today

Turkey’s army has has confiscated 700 parrots and 294 budgerigars on the border with Syria. The border closings have also shut off what was long a thriving illicit trade in goods including fuel, cigarettes, and sugar, as well as rare birds.

According to Mehmet Turan, a bird breeder in the Turkish border town of Reyhanli:

North Korea had pre-announced the test, saying that it was planned for some time between February 8 and 25, but then moved the launch date up and abruptly launched the missile.

Japan had been preparing for the launch by deploying land-based missile interceptors on its southwestern islands around Okinawa, with plans to shoot the missile down if it headed for Japanese territory.

There have been no reports of any Japanese launches following the North Korean launch. CNN and Nikkei (Japan)