The Syrian Network for Human Rights (SNHR) has released a report concluding that Russian airstrikes have killed more Syrian civilians than the Syrian forces or the Islamic State (ISIS/ISIL) in January.

The watchdog group found the Russian forces killed 679 civilians in the month, “including 94 children and 73 women.” 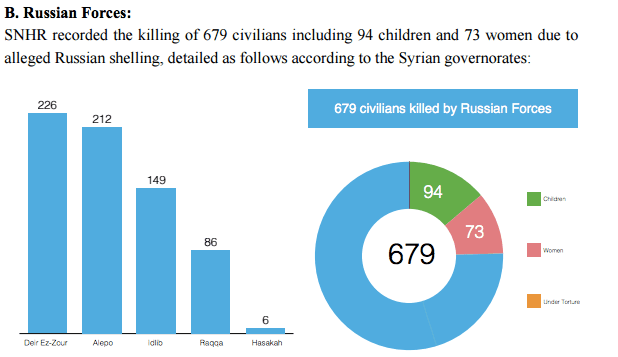 The chart shows how many civilians Russia killed in each city.

SNHR collects information from civilians on the ground. They insist their members document all victims with their “full name, place, and date of death.” But the group admits they cannot “reach and document every incident, especially in cases of massacres and siege where government forces besiege a town or a village and cut off communications.”

“It is very much likely that the actual death toll us [sic] larger than what we were able to document mainly because government forces don’t allow any rights organization [sic] to operate in its territories,” wrote SNHR.

The Islamic State “killed 98 civilians, including a child and 21 women.” The al-Nusra Front, a group linked to al-Qaeda, killed three people.

“SNHR affirms that government forces, its militias (Shabiha) and the Russian forces have violated the principles of the human rights international laws which protect the right to life,” the group concluded. “All the evidences and eyewitnesses’ testimonies prove that more than 90% of the wide and individual attacks targeted civilians and civil points. This contradicts with the Syrian government forces’ claims that it is fighting ‘Al-Qaeda and terrorists.'”

They added: “SNHR implies that those killing actions amount to crimes against humanity which are committed as part of a widespread and systemic attack directed against civilians.”

Last week, United States Secretary of State John Kerry met with Russian Foreign Minister Sergei Lavrov and others in Munich to discuss an immediate ceasefire. Lavrov tried to push the agreement to March 1, but Kerry demanded the ceasefire begin now. The agreement does “not apply to Islamic State and other militant groups fighting in Syria.”

However, Syrian officials have slammed Russia for continued bombings despite the ceasefire agreement.

“We have gotten used to conferences and words put into hope, but what we need is action — and the action that I see is that Russia is killing Syrian civilians,” exclaimed former Syrian Prime Minister Riad Hijab.

On Monday, missiles hit five hospitals and two schools, killing over 50 civilians. Doctors Without Borders ran one of the hospitals. The United States and aid groups pointed the finger at Russia.

“We are strongly against such claims, the more so, since each time those who come up with such charges prove unable to somehow confirm their groundless accusations,” retorted Dmitry Peskov, Russian President Vladimir Putin’s spokesman.

“Monday was the worst day for attacks on health care facilities for more than six months,” lamented Carolyn Miles, president of Save the Children U.S. “New information gathered by Save the Children and other organizations suggests that in total, seven facilities were bombed in airstrikes, more than was first reported. The attacks happened across Syria — in Aleppo, Idlib and Dara’a provinces.”