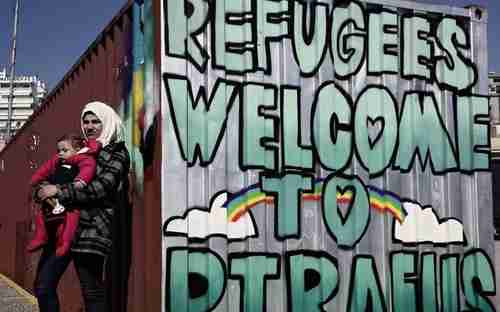 Since Macedonia closed its border last week to Afghan migrants, about 12,000 people have been stranded in Greece. Migrants had been coming from Turkey, across the Aegean Sea into Greece, and then across the border into Macedonia, on the path north, usually with the intention of reaching Germany or Sweden. But some countries have begun closing their borders to migrants, creating a chain reaction of closed borders that have left thousands stranded in Greece with no way to continue north.

Theoretically, migrants from Syria and Iraq, which are at war, should be allowed to pass through the border to Macedonia, while migrants from other countries are considered “economic migrants,” and not eligible for asylum in Europe. However, Macedonia is blocking even them, because of border closures further north.

On Thursday, some 400 migrants from Syria and Iraq left a transit camp provided by Greece, and are heading for the Macedonian border to demand to be allowed through.

Some 4,000 migrants continue to arrive in Greece every day. Authorities said 40 buses were stopped at various points along the country’s main 500-kilometer (310-mile) highway leading north from Athens. Traffic has also been slowed by tractor blockades by farmers protesting bailout measures.

Greek officials are not hesitating in saying that this is a growing catastrophe that is getting worse every day, with no end in sight. It is expected that the flood of refugees will grow larger as warm weather approaches. AP and Bloomberg

Tsipras: ‘Greece will not become a warehouse for souls’

Greece’s prime minister Alexis Tsipras is threatening retaliation if other EU countries do not do their share in accepting refugees:

We will not accept turning the country into a permanent warehouse of souls with Europe continuing to function as if nothing is happening.

Greece will not agree to deals (in the EU) if a mandatory allocation of burdens and responsibilities among member countries is not secured.

Tsipras did not specify what “deals” would be in jeopardy. According to Tsipras:

We will not tolerate that a number of countries will be building fences and walls at the borders without accepting even a single refugee. Greece will demand the mandatory participation of EU countries in the relocation of refugees. […]

“We did and will continue to do everything we can to provide warmth, essential help and security to uprooted, hounded people. We will either be in a union of common rules for all or everyone will do they please: we will not accept the latter.

Greece’s migration minister Yannis Mouzalas echoed Tsipras’s words: “Greece will not accept becoming Europe’s Lebanon, a warehouse of souls, even if this were to be done with major (EU) funding.”

The European Union Home Affairs Commissioner Dimitris Avramopoulos, a Greek politician who formerly served as a Greek foreign minister, emphasized that something must be done quickly:

In the next 10 days, we need tangible and clear results on the ground. Otherwise there is a risk that the whole system will completely break down.

We all have the responsibility to step up our efforts to apply the agreed European solutions. There is no time for uncoordinated actions. […]

Moving to the pressing situation in our neighborhood: the route along the Western Balkans. The situation is very critical. The possibility of a humanitarian crisis is very real and very near.

We cannot continue to deal through unilateral, bilateral or trilateral actions; the first negative effects and impacts are already visible.

We have a shared responsibility – all of us – towards our neighboring states, both EU and non-EU, but also towards those desperate people.

We cannot continue with the wave-through policy – the European Council was crystal clear on this.

And we cannot put caps on how many asylum seekers we receive. This is simply not according to EU and international rules. I have reminded Member States today, that everyone must respect and apply the rules.

The reason that Avramopoulos specified a “10 day” time limit, is because on Monday, March 7, there is an EU-Turkey summit meeting at which demands will be made on Turkey to reduce the flow of migrants.

On the other hand, Hungary’s prime minister Viktor Orbán warned that an uncontrolled migrant influx brought the risk of “terrorism, criminality, anti-Semitism and homophobia.” He referred to the alleged New Year’s Eve sexual attacks by migrants in Cologne and said, “I have four daughters and I don’t want my children to grow up in a world where Cologne could happen.” Reuters and European Commission and Kathimerini and Deutsche Welle

Austria’s Foreign Minister Sebastian Kurz on Wednesday led a one-day conference in Vienna to make agreements about controlling the influx of refugees along the “Balkan route.” Austria and nine other nations – Albania, Bosnia-Herzegovina, Bulgaria, Kosovo, Macedonia, Montenegro, Serbia and Slovenia – were invited to the conference. The meeting targeted policies related to Greece and Germany, but both of those countries were conspicuously not invited.

We invited all of the countries along the Balkan route that will be affected by our decision. […]

We want to slow the influx. So far, refugees have been brought to Central Europe. Now we simply cannot keep up with the numbers. We have set a limit of 37,500 for this year; that is still a lot compared to other European states.

On Wednesday, Greece issued a formal protest to Austria, and on Thursday, Greece recalled its ambassador to Austria for consultations.

Greece’s foreign ministry said that a meeting of Balkan nations was “rooted in the 19th century,” referring to the politics of the 1800s, and said that the recall was designed to “safeguard friendly relations between the states and peoples of Greece and Austria.”

German Chancellor Angela Merkel has said that she is adamantly opposed to further border fences in eastern Europe:

Do we really want to give up already and close the Greek-Macedonian-Bulgarian border, with all the consequences this would have for Greece and the European Union as a whole and therefore the Schengen area?

There have been some unconfirmed reports that German Chancellor Angela Merkel threatened retaliation against east European nations in the form of vetoing further aid. Deutsche Welle and AFP and The Local – Germany