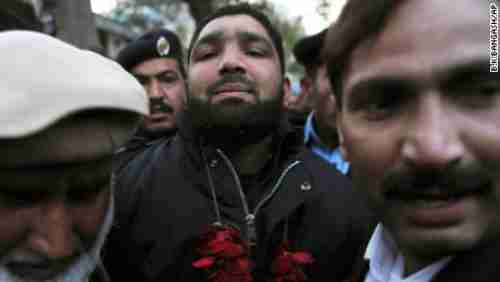 Mumtaz Qadri was executed by hanging in Pakistan on Monday, after having been convicted of murdering Salman Taseer, the liberal governor of Punjab province in Pakistan, on January 4, 2011. The execution has provoked widespread protests.

Qadri was Taseer’s bodyguard. To make sure he was dead, Qadri shot him in the chest 28 times. Qadri later said that he had shot Taseer because Taseer had opposed blasphemy laws in general, and for speaking out in favor of Asia Bibia, a Christian lady accused of blasphemy because she was Christian, and sentenced to death.

After the murder, Qadri instantly became a national hero to many segments of Pakistan’s society. The day after the governor’s death, Qadri went to court and dozens of lawyers greeted him with a hero’s welcome. They even showered him with rose petals and put a garland around his neck.

As I wrote in 2011, 500 Pakistani religious scholars issued a statement praising Qadri for keeping alive a “tradition of 1,400 years in Islam” which requires the killing of anyone committing an act of blasphemy against Prophet Mohammed.

Because of Qadri’s popularity after the murder, it had been feared that Qadri would never be punished for his crime, so Monday’s execution was something of a surprise. There were protests and riots in Karachi, Lahore and Islamabad, although most rallies were dispersed peacefully.

Blasphemy laws are not unique to Pakistan. As I described in 2012 after Charlie Hebdo magazine published cartoons of Mohammed (one of the reasons given for the attack in 2015), blasphemy laws in Britain and Ireland were in effect into the 1900s, although they were rarely enforced.

They were rarely enforced in Pakistan as well, until the 1980s, when something changed in public attitudes. Thousands of blasphemy cases have been heard since then. BBC and The Nation (Pakistan)

This kind of rapid massive popular change in attitude is of interest because it is usually generational, and often extremely destructive. In this case, popular opinion accepts the fact that someone can be put to death for merely accidentally saying the wrong thing, and popular opinion can treat even a murderer as a hero.

A comparable thing happened in America when the rising Generation-X generated the financial crisis by creating and selling billions of dollars in fraudulent subprime mortgage backed synthetic securities. Despite the fact that millions of people lost their homes and jobs, not a single person has been criminally prosecuted for these crimes.

More recent examples are the sudden popularity of Bernie Sanders and Donald Trump in their respective parties, although neither of these men has shown the slightest sign of knowing what’s going on in the world. Trump became popular with many young people when he referred to Mexicans as rapists and murderers, and Sanders became popular with young people when he started talking about giving everything away for free.

All of these examples – treating the murder of Salman Taseer as a hero, defrauding the public and creating the financial crisis, the sudden popularity of Trump and Sanders – are the kinds of things that happen during a generational Crisis era, when young people start looking for solutions the same way that they look for rock stars.

The survivors of a generational crisis war, like World War II, are well aware of what the world is like. There is massive rape and slaughter, there are millions of refugees, there’s massive starvation and growth of disease.

These survivors, the GI generation and the Silent generation, vow to never let anything like that happen again, and as long as they are alive they protect the world from letting it happen again.

But today those generations are almost gone, and the protections are gone as well. Young people are seeing the first signs of the horrors of a crisis war: atrocities by the so-called Islamic State (IS or ISIS or ISIL or Daesh), mass kidnappings of girls by Boko Haram, selling the girls into slavery, millions of refugees pouring into Europe, and a continuing financial crisis. Young people, who have no idea why this is happening, are reacting by making mass irrational decisions.

We’ve already seen one disaster from these kinds of decisions: the financial crisis. As these mass irrational decisions continue, there will be even worse disasters, including a new world war.

Mass irrational decisions, like applauding the mass use of blasphemy laws, has also caused disasters in Pakistan, namely an unending series of bloody terrorist attacks, particularly against Shia Muslims. However, those were not the only targets. In December 2014, Pakistan suffered a horrific Taliban attack on a Peshawar army school, killing over 130 schoolchildren. This attack on an army school changed a lot of minds, and probably was the event that made it possible for Mumtaz Qadri finally to be executed on Monday.

Aatish Taseer, the son of Salman Taseer, was interviewed on the BBC World Service on Monday. He said that Qadri’s execution brought him relief but no joy. He described the tumultuous relationship he had with his father, and how it related to the country Pakistan as a whole (my transcription):

The original reason for the estrangement was very simple – my father was in politics in Pakistan, I was half Indian and it would have been damaging for him to be in touch with me. Later we had a very moving, very important kind of — we sort of Reunited. And for many years, things were very good between us. And I would come and go from Pakistan. And around the time of the London bombings, we started to have very different opinions about the way that Pakistan was going.

Taseer is referring to the 2005 London subway bombings, perpetrated by children of immigrants who had received training over the internet by al-Qaeda clerics in Pakistan.

I began to travel for my first book, I really saw on the ground that the situation vis a vis Islam was going to get much worse in Pakistan. My father was a very fierce patriot, and didn’t want to believe what I was saying to him. So this is what we fought over. We fought over his defense of Pakistan, and my feeling that an environment was building in that country that would be very very toxic. And I think that the Pakistan that I described in my book was ultimately the Pakistan that killed my father. […]

I think that he came of age at the time of Bhutto, and of a kind of socialist movement, and he imagined he was protected — it was almost a kind of upper class feeling that he knew this country and nothing could touch him. And that if he could only speak to it in his own way, then he would be all right. And I don’t think that he recognized how much this country had changed.

Taseer added that the fallout from the execution of Qadri is yet to come. “Well, don’t confuse what the government does with the actual mood on the ground. I don’t know if we’ve even seen the worst of the fallout. … [Is Pakistan a safe place?] As the Pakistan’s High Commissioner said to me, it’s safe until it isn’t.” BBC World Service Newshour

Several thousand migrants continue to pour into Greece every day, and they immediately travel to the border with Macedonia, hoping to take the trip north to Germany. Macedonia is allowing only 300 or so migrants to pass through each day, so the overcrowded refugee camps in Greece are becoming even more overcrowded. Protests are increasing, and on Monday Macedonia’s police used teargas on migrants trying to push through the gate blocking the border. This is a disaster waiting to happen. AP