The U.S. Navy reports that the destroyer USS Donald Cook “encountered multiple, aggressive flight maneuvers by Russian aircraft that were performed within close proximity of the ship,” while operating in the international waters of the Baltic Sea.

The aggression began on Monday, April 11, while Donald Cook was “conducting deck landing drills with an allied military helicopter.” A report at Military Times specifies that it was a Polish helicopter, and Donald Cook had recently put to sea from the Polish port of Gdynia, near Gdansk.

Two Russian SU-24 “Fencer” attack jets began making “numerous close-range and low altitude passes” over the ship coming within 1,000 yards of the ship at an altitude of about 100 feet.

There is never a good time to have hostile jets blasting over a ship with simulated attack passages, but the middle of a helicopter landing drill is just about the worst time. The ship’s commanding officer deemed the Russian pilots’ behavior “unprofessional and unsafe,” which are terms rarely applied to the provocative behavior the U.S. military periodically encounters from unfriendly forces. In fact, while several previous incidents with the Russians have been described as “unprofessional,” this is the first one labeled “unsafe.”

The next day, April 12, a Russian KA-27 Helix helicopter began flying in low-altitude circles around the ship, possibly to take photographs of it. According to U.S. Defense Department officials, the Russian helicopter refused multiple attempts at radio contact by the Donald Cook.

After the helicopter departed, another Su-24 jet appeared on the scene and made a series of even more aggressive passes over the Navy ship, clearly simulating attack runs. Eleven passes were made altogether.

A picture is worth a thousand words.  This is how close the Russian jets came to the Navy destroyer: 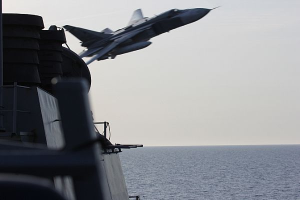 According to the Military Times, the Russian planes repeatedly came within thirty feet of the ship, and they were flying low enough to leave wakes on the sea water.

“We have deep concerns about the unsafe and unprofessional Russian flight maneuvers,” said the U.S. European Command in a statement. “These actions have the potential to unnecessarily escalate tensions between countries and could result in a miscalculation or accident that could cause serious injury or death.”

The European Command added that “U.S. officials are using existing diplomatic channels to address the interactions while the incidents are also being reviewed through U.S. Navy channels.”

The Military Times notes that simulated attack passes are specifically prohibited by a 1973 treated between the United States and Soviet Union.

Reuters reports White House spokesman Josh Earnest saying the incident was “entirely inconsistent with the professional norms of militaries operating in proximity to each other in international water and international airspace.”

Reuters also notes that NATO is planning “its biggest build-up in eastern Europe since the Cold War to counter what the alliance, and in particular the three Baltic states and Poland, consider to be a more aggressive Russia.”

Russian displeasure at this buildup would be the most obvious reason for its provocations in the Baltic Sea. Those with long memories may remember Barack Obama laughing at the idea of Russia as an American adversary during the 2012 election, taunting his opponent Mitt Romney by saying, “The 1980s are now calling to ask for their foreign policy back, because the Cold War’s been over for 20 years.”

Russian Ministry of Defense spokesman Maj. Gen. Igor Konashenkov “hit back” against the U.S. complaints on Thursday, as NBC News put it.

“Upon visual contact, the Russian pilots have executed a turnaway from the ship, compliant to all safety regulations,” Konashenkov insisted. “To be honest, we don’t understand such a painful reaction from our American colleagues.”