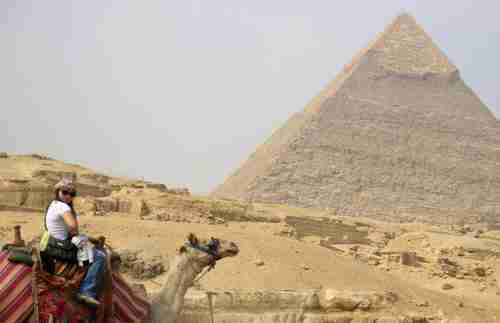 At this writing, new evidence indicates that there was an electrical fire in the toilet and electronics of EgyptAir Flight 804, which went down in the Mediterranean Sea on Thursday, killing all 66 people onboard, as it traveled from Paris to Cairo. It’s not known if the fire was the cause of the downing, or if the fire was a byproduct of a terror attack.

Either way, it’s a disaster for Egypt’s tourism industry and economy in general, which has already been spiraling downward. This was the third attack on Egypt’s passenger aviation in just the last six months. In March, an EgyptAir flight was hijacked by a man wearing a fake explosive belt, and forced to land in Cyprus.

And in November, a passenger plane exploded over northern Sinai, 23 minutes after taking off from Egypt’s Sharm el-Sheikh airport on the Sinai Peninsula, heading for St. Petersburg Russia. That was not an Egyptian plane but was a Russian plane, Metrojet flight 9268, but that makes little difference given that it was blown up over Egypt.

Going beyond aviation disasters, there have been several terrorist bombings in Egypt, and the north Sinai is almost a war zone.

The tourism industry contributes about 11 per cent of the country’s gross domestic product and employs about 12 per cent of the workforce. However, the number of tourists travelling to Egypt has fallen from 2.2 million in the first quarter of 2015 to about 1.2 million in the first quarter of 2016. Egypt’s beach resorts are almost deserted, and even usually popular sites such as Giza’s pyramids and Great Sphinx have few visitors anymore. The new airline disaster is going make these bad figures even worse.

During the regime of Hosni Mubarak, Egypt was a tourism powerhouse, but the number of visitors has been falling since the 2011 Arab Spring and the overthrow of Mubarak, and even more since the army coup, led by current president Abdel al-Fattah al-Sisi, to oust the Muslim Brotherhood government of Mohammed Morsi in 2013. International Business Times and CNN and BBC (9-Jan)

The EU-Turkey refugee deal has drastically reduced the flow of migrants crossing the Aegean Sea from Turkey to Greece. But the EU has left Greece on its own to deal with the tens of thousands of migrants that already arrived, including many that are crowded filthy refugee camps.

The EU had promised Greece that EU member countries would send a staff of 2,300 experts — police, case officers, judges, and language interpreters — to help process asylum requests, and the EU has not supplied that staff. Nor has the EU resolved the question about how approved Syrian refugees are to be distributed to the EU member countries, as many EU nations are stalling or refusing to accept more migrants.

The EU has simply blown off its obligations, leaving it to Turkey to take on the problem for them. The EU is desperately dependent on Turkey, and soon will have to fulfill its part of the EU-Turkey deal: Allowing 70 million Turkish citizens to have visa-free travel in Europe’s Schengen Zone. Turkey’s president Recep Tayyip Erdogan has forcefully and frequently repeated his threat that he will cancel the refugee deal and open the floodgates if the EU reneges on the visa-free travel.

Many Europeans dislike they idea under any circumstances. The eastern European nations that were part of the Ottoman Empire are opposed, and there are other groups of people who simply dislike Turks.

Europeans have also been concerned by Erdogan’s harsh use of anti-terrorism laws against Turkey’s Kurdish minority. Those concerns were made even stronger on Friday when the parliament passed a constitutional amendment removing prosecutorial immunity from MPs. The amendment is particularly targeted to deputies from the Kurdish Peoples’ Democratic Party (HDP). The passage of the amendment will permit Erdogan to have Kurdish members of parliament prosecuted and possibly jailed on terrorism charges.

For the European Parliament to willingly approve Turkey’s visa-free travel, Turkey will have to change its laws — something that’s not going to happen, and something that the increasingly authoritarian and tyrannical Erdogan feels is not necessary since the EU is desperate. But the increasingly nationalistic and xenophobic European parliament may refuse to approve visa-free travel anyway, leading to dark confrontation between the EU and Turkey. Hurriyet (Ankara) and Deutsche Welle