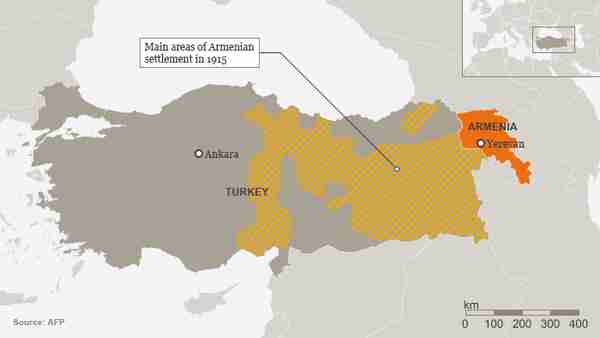 In a move considered highly controversial because of its timing, Germany’s parliament voted on Thursday to recognize the deaths of Armenians in 1915 during World War I at the hands of Turkey’s Ottoman Empire as an act of “genocide.” However, the vote was purely symbolic, as there are no legal consequences associated with the vote.

For Germans, one possible motivation for the vote is that Germany and the Ottomans were allies in World War I, and Germany may share some of the guilt for the deaths of the Armenians. The resolution emphasizes that Germany is aware of the “uniqueness” of the Nazi Holocaust and it “regrets the inglorious role” of Germany, the Ottoman Turks’ main military ally at the time of the Armenians’ killings, of failing to stop the “crime against humanity.”

Germany’s valuable contribution not only to the international recognition and condemnation of the Armenian Genocide, but also to the universal fight for the prevention of genocides, crimes against humanity.

The vote was overwhelming, with only one MP voting against, and only one abstention. Bettina Kula, who voted against the resolution, did not dispute the claim of genocide, but said that “It’s not the duty of the Federal Parliament to evaluate historical events that took place in other countries.”

Members of Turkey’s government were furious at the vote, and declared it “null and void.” Turkey’s president Recep Tayyip Erdogan was on a visit to Kenya, where he condemned the vote and announced that he was recalling Turkey’s ambassador to Germany “for consultation.” This was considered a mild action, one that’s easily reversed. Last year, Turkey temporarily recalled its ambassadors to Austria and the Vatican after Austria and Pope Francis described the killings as genocide.

According to the Turkey’s deputy prime minister Numan Kurtulmus:

The fact that the German Parliament approved distorted and baseless claims as genocide is a historic mistake. The German Parliament’s approval of this bill is not a decision in line with friendly relations between Turkey and Germany. This decision is null and void for Turkey.

This is an issue that scientists and historians need to reach a conclusion on, not politicians or parliaments. As Turkey, we will surely give the necessary response to this decision in all platforms.

Most analysts outside of Turkey consider the evidence of genocide overwhelming.

Armenia says that as many as 1.5 million people were killed by Turkish forces in World War I between 1915 and 1917, and says that the mass killings were genocidal. According to Turkey, something like 500,000 Armenians and 500,000 Turks were killed in the massive civil war that occurred when the Armenians rose up against the Ottoman rulers, and so it wasn’t a genocide. However, in February 1919, a court-martial found a number of top Ottoman officials guilty of war crimes, including against Armenians, and sentenced them to death. Deutsche Welle (Berlin) and Hurriyet (Ankara) and AFP

The Armenian genocide question is a century-old issue, so it seems surprising that the German parliament is raising the issue at exactly this time, at the height of the negotiations over the EU-Turkey refugee deal.

The European Union desperately needs the deal to continue. Last year, there were thousands of Syrian refugees crossing the Aegean Sea every day to Greece’s islands, creating an existential crisis for the EU. Thanks to the deal, Turkey has reduced that flow from thousands per day to dozens per day. This has permitted the EU to go its merry way without being threatened with the tsunami of refugees.

However, the EU has obligations under that treaty. The EU is obligated to pay Turkey 3 billion euros in aid for refugees, followed possibly by 3 billion more. None of that money has been paid, and is way overdue.

Possible most critical is the commitment to visa liberalization: Any of Turkey’s 74 million citizens must be able to travel freely throughout Europe’s Schengen zone without a visa. The deadline for this change is the end of June, and there are many forces in Europe that are bitterly opposed to visa liberalization for Turks. However, Turkey’s president Recep Tayyip Erdogan has said repeatedly that if visa liberalization is not granted, then he will cancel the deal and allow the full flow of Syrian refugees to Europe to resume. It is quite possible that there are hundreds of thousands of Syrian refugees currently in Turkey just waiting for the deal to be canceled, and preparing to travel as soon as it is.

So this vote on century-old Armenian genocide issue arguably is coming at the worst possible time, at the height of tensions over the EU-Turkey deal. The suspicion is that the issue was brought to a vote at this time by people who would like to sabotage the visa liberalization.

A German official in the government of German Chancellor Angela Merkel said hopefully, “Despite some of his rhetoric, we believe Erdogan has a strong interest in making the migrants deal work and will not allow this to get in the way.”

Over a thousand Turks demonstrated against the resolution on Saturday in front of the Reichstag building in Berlin and some German lawmakers say they have been bombarded with hate mail and insults on social media for supporting the resolution. Reuters and LA Times