Calls for a probe into the 1965 crackdown on a communist-led coup attempt have rattled Indonesians, long accustomed to living in a country where the Communist Party is banned.

An estimated 10,000 people marched in the streets of Jakarta Friday, burning red hammer and sickle flags and calling for a robust rejection of the Indonesian Community Party (PKI). According to the Jakarta Post, the protesters were members of a variety of civil society groups, many of them Islamist in nature: the Islam Defenders Front (FPI), Islamic People’s Forum (FUI) Pemuda Panca Marga and the Communication Forum of Indonesian Veterans’ Children (FKPPI), among others.

The group congregated Friday after morning prayers, the protest preceding the beginning of the Islamic holy month of Ramadan. The Associated Press identified the specific grievance of the group as support on the part of President Joko Widodo for an investigation into the 1965 elimination of thousands of communists for supporting a coup. The next year, the government banned the Communist Party in its entirety. 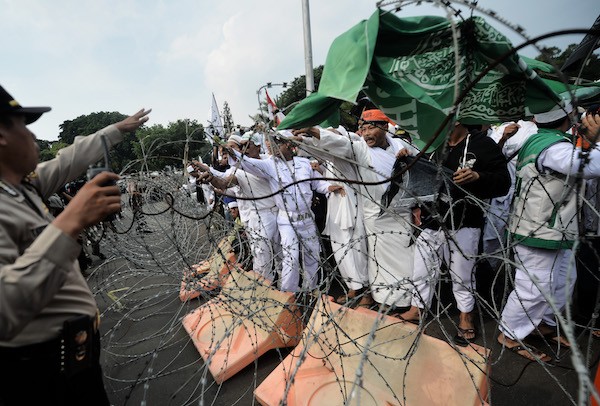 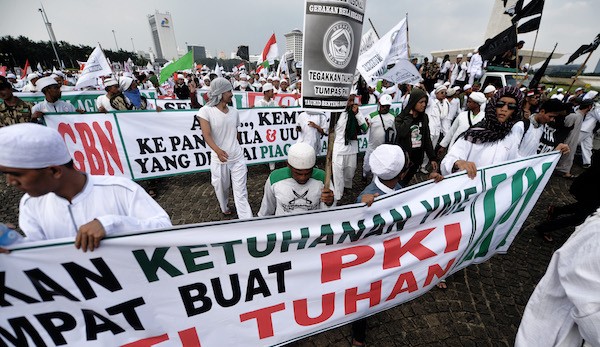 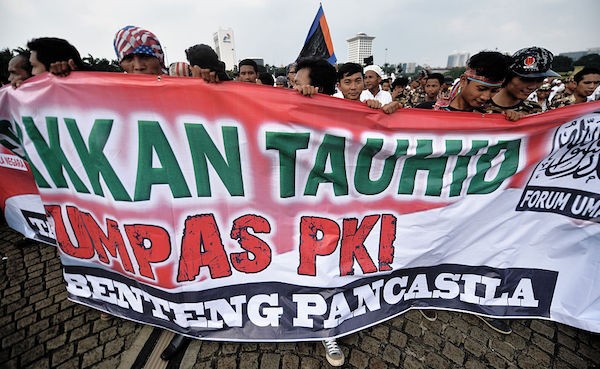 While Widodo has been tentatively responsive to those calling for an inquiry into the killings, not all in his government are sympathetic to the communists. Defense Minister Ryamizard Ryacudu said in a speech this week that those killed “deserved to die” for demanding an imposition of communism on the nation of Indonesia, which narrowly escaped the fate of neighboring communist countries like Vietnam, Laos, and Cambodia. He compared the killing of an estimated 500,000 communists to the use of nuclear weapons by the United States to end World War II.

“Millions of people died because of the bomb, and that was war,” he said of the Hiroshima and Nagasaki bombings, noting that President Barack Obama did not apologize for the bombings while visiting Japan last week.

Reports note that those attending the event at which the defense minister spoke responded to his assertion with thunderous applause.

The government also hosted a number of leaders of the Jakarta march on Friday, seeking a round table discussion to address concerns regarding the looming threat of communism. Among those in attendance, according to Indonesia’s Antara news, were the heads of various Islamic groups.

In addition to support for the uprising by those in the upper levels of power, the Agence France-Presse reports that the Indonesian police have indeed seen an increase in communist activity in the past few weeks, having to arrest an increasing number of people for the crime of “spreading communism” through the use of propaganda or wearing pro-communist t-shirts.

While some young in Indonesia may gravitate towards communism, military leaders are working to stage events to discuss the dangers of allowing Marxist ideology to take root. On Wednesday and Thursday of this week, a group of retired military officers organized a panel titled “Protecting Pancasila from the threat of the Indonesian Communist Party [PKI] and other ideologies,” in which the group demanded the government impede a new probe into the 1965 incidents.

“We are calling on the government, NGOs and the public not to bring up past cases anymore, as it could open old wounds, disrupt the nation’s unity, or even encourage prolonged horizontal conflicts,” Indra Bambang Utoyo of the Communication Forum of Indonesian Veterans’ Children ( FKPPI ) told the Jakarta Post, adding that the Indonesian Communist Party has long sought such a review of the coup attempt to absolve themselves of their role in the attempted uprising.

“The kidnapping and murder of six Army generals on Sept. 30, 1965, led to the purge of PKI members, sympathizers and their families, resulting in hundreds of thousands of victims killed across the country during the massacres in 1965 and 1966,” the Post notes.