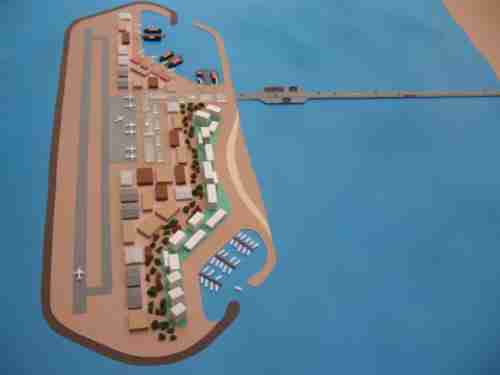 Proposed seaport on artificial island off coast of Gaza

Reports indicate that Turkey and Israel are close to restoring diplomatic relations which deteriorated sharply in 2010 after the “Mavi Marmara” incident, during which nine citizens of Turkey were killed by Israel’s military.

Turkey was the first Muslim country to formally recognize the state of Israel in 1949, and relations were generally good for decades. When Turkey’s current president Recep Tayyip Erdogan came to power in 2002 as prime minister, relations became more tense, but still cordial.

Relations seriously deteriorated, starting in 2008, over Israel’s relationship with Gaza. Israel imposed a total blockade of Gaza, and Egypt also closed the Rafah crossing between Gaza and Israel, triggering violent protests by the Gazans. (From January 2008: “In dramatic scene, 60,000 Gazans pour into Egypt through holes blasted through border wall”)

Tensions grew in Gaza through 2008. Hamas, the terrorist group governing Gaza, was launching dozens of rockets into Israeli territory every day, while Israeli air strikes struck weapons sites in Gaza, but also killed dozens of Gazans. In December, the exchanges of fire escalated into a full-scale war (Operation Cast Lead), beginning with air strikes followed by a full-scale ground invasion.

At the end of January 2009, Israel’s president Shimon Peres and Erdogan got into a passionate debate at the World Economic Forum in Davos. After a heated exchange, a furious Erdogan walked out of the meeting, and went home to a hero’s welcome when he returned to Turkey.

In June 2010, international activists send an aid flotilla to Gaza to break Israel’s blockade. Israel’s military intercepted the flotilla and boarded the lead boat, the Mavi Marmara. In the ensuing fracas, nine Turkish citizens were killed. The entire incident was a disaster for Israel. ( “1-Jun-2010 News — Wide condemnation of Israel over Gaza flotilla”)

As a result, Turkey effectively cut off almost all relations with Israel. It is only now, six years later, that reports indicate that a formula has been found for reconciliation.

It is believed that the situation in Syria has caused Erdogan to be more willing to compromise than he has been in the past. There are three reasons:

These reasons have apparently convinced Erdogan to compromise with Israel. Negotiators from Turkey and Israel are expected to complete a draft agreement in the next few days. Jerusalem Post and Washington Post and AP (30-Jan-2009)

Turkey drops demand for lifting the blockade of Gaza

Erdogan has consistently made three demands of Israel before relations could be restored. Israel would have to formally apologize to Turkey, and Israel did that in 2013. Israel would have to pay compensation to the families of the Turks who died in the Mavi Marmara confrontation, and reports indicate that Israel has agreed to pay $20 million.

According to a report on RFI, the Turkey has dropped the requirement to lift the blockade, based on a compromise:

The third item in the list above, the proposal for an offshore seaport has been around for a while, and is extremely controversial.

The proposal was first put forward in 2011 by Israel’s transportation minister Yisrael Katz. The seaport would be built in international waters, located on a 5-km-long artificial island. The port will be connected to the land by a detachable bridge, which will be under Israeli supervision. Israel would be able to close the bridge at any time, if necessary.

I do not think it is right to lock up two million people without any connection to the world. Israel has no interest to make life harder for the population there. But because of security concerns we can’t build an airport or seaport in Gaza.

However, there are plenty of critics.

Palestinian Authority president Mahmoud Abbas is said to be opposed to the project, since it would cut the final strings connecting Gaza to the West Bank. Palestinians criticize the project as another excuse to delay removing the Gaza blockade.

An Israeli commentator, Martin Sherman calls the proposal “so glaringly absurd that it transcends what you mistakenly believed was the pinnacle of imbecility,” and says that it would encourage further terrorism. Oil Price and Washington Post and Israel Hayom (27-May)

Russia improves military ties with Israel, will not veto relationship with Turkey

At a meeting in Moscow on June 7, Russia’s president Vladimir Putin and Israel’s prime minister Benjamin Netanyahu decided to strengthen military ties, and to hold joint naval and air military exercises during the summer.

At the same meeting, Putin said that he felt “exceptionally positive” about efforts to restore relations between Israel and Turkey. Putin said, “We believe that any movement of these states and peoples toward each other will have a positive impact on the international situation in general. We welcome this process.” Bloomberg (8-June) and Debka (10-June)