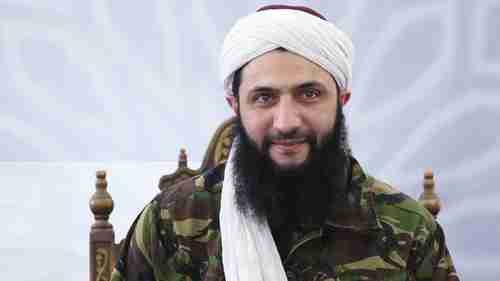 Jabhat al-Nusra (al-Nusra Front), al-Qaeda’s branch in Syria, announced on Thursday that it is no longer affiliated with al-Qaeda, and was no longer under the command of al-Qaeda leader Ayman al-Zawahiri.

The group’s leader, Abu Mohamad al-Jolani, announced that the group was changing its name to Jabhat Fateh al-Sham (Front for the Conquest of Syria):

We have stopped operating under the name of Nusra Front and formed a new body … This new formation has no ties with any foreign party.

[The change is intended] to remove the excuse used by the international community – spearheaded by America and Russia – to bombard and displace Muslims in the Levant: that they are targeting the Nusra Front, which is associated with al-Qaida.

This new organization aims … to serve the Muslims, attend to their daily needs and ease the hardships in every possible way, [and to] unite the people of [Syria and] ensure security, stability, and a dignified life for the people.

The split with al-Qaeda was apparently friendly, suggesting that the split may be part of a larger plan. In an audio message, al-Qaeda leader Ayman al-Zawahiri said:

You can sacrifice without hesitation these organizational and party ties if they conflict with your unity and working as one body.

Al-Qaeda in Iraq (AQI) led by Jordanian terrorist Abu Musab al-Zarqawi, was defeated in the aftermath of the Iraq war, first by an American drone strike that killed al-Zarqawi, and later by president George Bush’s “surge” strategy that turned Iraqi Sunnis against AQI. (See “Iraqi Sunnis are turning against al-Qaeda in Iraq” from 2007.)

The genocidal campaign of extermination against Syrian Sunnis by Syria’s president Bashar al-Assad drew tens of thousands of young jihadists from all over the world for the fight against al-Assad, leading to the creation of the so-called Islamic State (IS or ISIS or ISIL or Daesh) in Syria, and then its spectacular success in taking control of large regions of both Syria and Iraq. But now, President Barack Obama’s bombing coalition strategy, in cooperation with Kurdish and Shia Muslim fighters, has drastically reduced the regions under ISIS control, and raised hope that ISIS is being defeated.

This is the context in which the al-Nusra/al-Qaeda split must be viewed. Both AQI and ISIS imposed harsh Sharia law on the people that they governed, and tortured, killed or raped anyone who did not comply. It should not be a surprise to anyone that no government of that sort is going to be popular, and indeed both AQI and ISIS lost control when their own constituents turned against them. In the end, even dictators and terrorists must eventually have do what the people want.

Reports all along have indicated that al-Nusra was torn between following a harsh Sharia model versus following a more moderate model of governing. There was a big group of al-Nusra officials who wanted to follow the harsh Sharia model, but there have also been a number of “moderate” anti-Assad, anti-ISIS groups in Syria who have strongly urged a split. The strongest opponent of a link to al-Qaeda was a key ally, Ahrar al-Sham, and maintaining a good relation with this and other allies was essential for the success of al-Nusra.

Thus, the break with al-Qaeda can be thought of in either of two ways. First, it’s a sign that al-Nusra has abandoned the harsh Sharia model of governing, and so will be able to ally and possibly merge with other anti-Assad opposition groups, and become the leader of all of these groups, replacing ISIS as the largest and most powerful Salafist anti-Assad opposition group in Syria.

The other way to look at it is that it is all a façade, that the amicable split between al-Nusra and al-Qaeda had the purpose of putting a more friendly face on al-Nusra, and that al-Nusra is still allied with al-Qaeda, but not publicly.

It is possible that both of these are true, and that the new Jabhat Fateh al-Sham will have the best of two worlds — tacit support from al-Qaeda, but with a more moderate face to the outside world and to the other anti-Assad and anti-ISIS factions.

There’s another advantage, according to Brookings analyst Charles Lister:

Perhaps more significantly, this latest development has also made it entirely feasible that regional states, notably Qatar and Turkey, could now attempt to provide direct material support to the group. Turkey in particular is likely to use the argument that, having announced a severing of its ties to al-Qaeda, Jabhat Fateh al-Sham is as legitimate a partner as Washington’s preferred [anti-ISIS] ally, the Kurdish YPG.

This is a good time to recall the Generational Dynamics prediction for where things are going and where the trend lines are, since there seems to be a new event every week or two that moves us along that trend line. As I’ve been writing for years, Generational Dynamics predicts that in the coming Clash of Civilizations world war, China, Pakistan, and the Sunni Muslim countries will be one side, and India, Iran, the United States and the West will be on the other side. ( “15-Jul-2015 World View — Arab views of Iran nuclear deal”)

Once again, we have a major new event that moves us along this trend line. Over the past few years, we’ve seen events that move the US closer to Iran and Russia, and we’ve seen the increasing alienation of relations between the US and countries like Saudi Arabia and Egypt.

Even in the last few days, we see a possible major split between the US and Turkey, with Turkey claiming that exiled cleric Fethullah Gulen worked with the CIA to launch the recent attempted coup d’état, and claiming further that any further delay in extraditing Gulen to Turkey will be proof of American complicity.

Despite reports that ISIS was being funded by Turkey and Saudi Arabia, ISIS has always been and will be too dangerous to the governments of both those countries. But the new Jabhat Fateh al-Sham could very well turn out to be the key that unites a wider group of Sunni Arabs against al-Assad, Iran, Russia, and eventually against the United States, moving the Mideast even further along the trend line. CS Monitor and Foreign Policy and Press TV (Tehran)