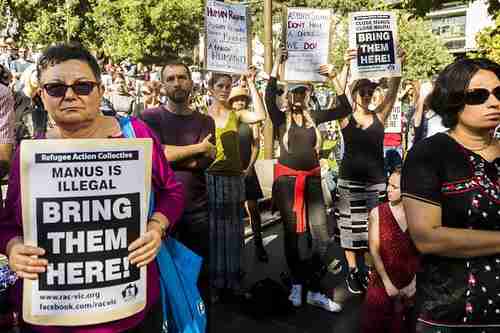 Australia’s prime minister Malcolm Turnbull announced plans to introduce legislation that will ban illegal immigrants who arrive by boat from ever being allowed into Australia again, even legally. The bill is intended to target human traffickers, since their potential customers will know that they will never have a chance of living in Australia. According to Turnbull, “These people smugglers are the worst criminals imaginable. They have a multibillion-dollar business. It is a battle of will. We have to be very determined to say no to their criminal plans.”

They will have a lifetime ban of coming to Australia, even as a tourist or as the spouse of an Australian citizen. The only exception will be children brought illegally by boat by their parents.

The proposed law is retroactive to July 19, 2013, because that is when the former prime minister Kevin Rudd said: “As of today, asylum seekers who come here by boat without a visa will never be settled in Australia.” That means that the migrants currently imprisoned on Manus or Nauru will be forbidden from ever reaching Australia.

The detention center policy has been extremely successful, in that the number of migrants reaching Australia has been sharply reduced. However, the policy has been widely condemned as cruel to people fleeing poverty and violence, and as a violation of international laws. The proposed law will receive substantial opposition during attempts to get it passed. Australian AP and Sydney Morning Herald

Whatever the outcome of Friday’s announcement by FBI Director James B. Comey potentially reopening the Clinton e-mail investigation, whether it helps or hurts Clinton or Trump, the unexpected media storm that followed the announcement is potentially significant.

My personal belief is that Comey made his announcement to cover his ass, for whatever reason. I also believe that he made the announcement on Friday afternoon expecting that, like almost all Friday afternoon announcements, it would be forgotten almost immediately. But that’s not what happened. Instead of being forgotten, Comey’s announcement is continuing to gain coverage in the mainstream media, which is a major surprise.

The standard is that massive criminal activity and corruption by politicians in Washington is simply ignored. As I’ve been writing for years, thousands of Gen-X bankers purposely created trillions of dollars worth of fraudulent subprime mortgage backed synthetic securities, and then sold them to investors, knowing that they are fraudulent, creating a massive financial crisis that made millions of people bankrupt and/or homeless. And yet, not a single one of them has ever been prosecuted, but instead they have gotten off by contributing a fraction of their fraudulent gains as contributions to the Obama administration. And in Congress, as Peter Schweizer showed in 2011 appearing on 60 Minutes, Congressmen and Senators of both parties are using inside information on secret lawmaking negotiations to line their pockets with huge profits in the stock markets. Ordinary people would go to jail for insider trading for this sleazy behavior, but Congress has conveniently exempted itself, allowing it to commit crimes and enrich themselves on a daily basis and get away with it.

The massive corruption and criminal activity in Washington is far greater than anything in my lifetime, much greater than ever occurred in Richard Nixon’s administration. But today, the Washington standard is that criminal activities go unpunished. In the case of Hillary Clinton’s e-mail activities, the mainstream media are so totally in the tank for Clinton, no longer even pretending to be unbiased journalists, that it’s a shock to everyone that the stories around Comey’s announcement are not only continuing, but growing.

The Republicans are gloating of course, because this is so unexpected. The Democrats are apoplectic with rage because they are suffering from a case of cognitive dissonance and are going through the five stages of grief, as all their fundamental beliefs about their right to commit criminal activity with impunity are suddenly being challenged.

From the point of view of Generational Dynamics, what is interesting here is not whether Clinton is guilty or innocent, but why there is a sudden change in public mood that might mean that her allegedly criminal activities might actually have consequences this time. It may actually be possible that after years of not caring about corruption and criminal activity in Washington, the public suddenly does care. If true, this change would be extremely significant.

That someone in Washington, and Clinton in particular, could possibly face this kind of hostile media scrutiny may represent a major change in public mood that will be seen in other ways in the months to come, no matter who becomes president. Washington Post and Leon Festinger – Cognitive Dissonance Theory