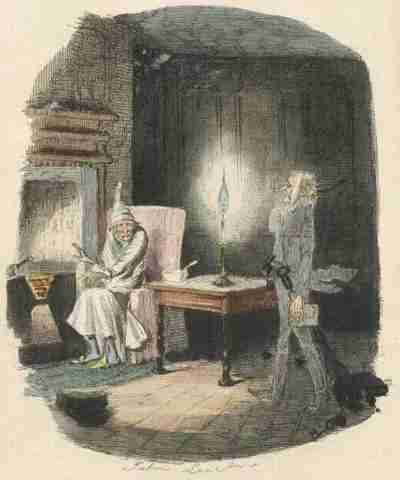 Ebenezer Scrooge meets Jacob Marley’s ghost — by John Leech, from the 1843 edition of Charles Dickens’ A Christmas Carol. Greece used this picture to accuse European officials of being Scrooges. (Gutenberg)

Greece’s finance minister Euclid Tsakalotos has sent a Christmas card to journalists, apparently mocking Greece’s bailout lenders, and accusing them of being as stingy and hard-hearted as Ebenezer Scrooge in the 1843 book A Christmas Carol by Charles Dickens.

Greece’s Christmas card displays the picture shown above of Ebenezer Scrooge meeting the ghost of his dead partner Jacob Marley. The picture was an illustration by John Leech in the original 1843 edition. The picture in Tsakalotos’s card was accompanied by the following caption:

Perhaps in all of our Christmas tales there is a terrifying character like Ebenezer who receives the season’s spirit in an immense solitude, and closed like an oyster. And maybe our Christmas tale is no exception.

But, dear friends and colleagues, our wishes go beyond all the Ebenezers of this world. We don’t give up on our wishes.

Greece is undoubtedly alluding to the decision by Greece’s creditors to cancel a planned bailout loan, after Greece’s prime minister Alexis Tsipras announced new social spending: a one-time pre-Christmas bonus to poor pensioners, and a reduction in taxes for Greece’s Aegean Sea islands whose tourist industry had suffered because of the refugee crisis. Greece needs the bailout loan to meet its debts and avoid bankruptcy.

Oh! But he was a tight-fisted hand at the grindstone, Scrooge! a squeezing, wrenching, grasping, scraping, clutching, covetous, old sinner! Hard and sharp as flint, from which no steel had ever struck out generous fire; secret, and self-contained, and solitary as an oyster. The cold within him froze his old features, nipped his pointed nose, shrivelled his cheek, stiffened his gait; made his eyes red, his thin lips blue; and spoke out shrewdly in his grating voice. A frosty rime was on his head, and on his eyebrows, and his wiry chin. He carried his own low temperature always about with him; he iced his office in the dog-days; and didn’t thaw it one degree at Christmas.

External heat and cold had little influence on Scrooge. No warmth could warm, no wintry weather chill him. No wind that blew was bitterer than he, no falling snow was more intent upon its purpose, no pelting rain less open to entreaty. Foul weather didn’t know where to have him. The heaviest rain, and snow, and hail, and sleet, could boast of the advantage over him in only one respect. They often “came down” handsomely, and Scrooge never did.

Nobody ever stopped him in the street to say, with gladsome looks, “My dear Scrooge, how are you? When will you come to see me?” No beggars implored him to bestow a trifle, no children asked him what it was o’clock, no man or woman ever once in all his life inquired the way to such and such a place, of Scrooge. Even the blind men’s dogs appeared to know him; and when they saw him coming on, would tug their owners into doorways and up courts; and then would wag their tails as though they said, “No eye at all is better than an evil eye, dark master!”

But what did Scrooge care! It was the very thing he liked. To edge his way along the crowded paths of life, warning all human sympathy to keep its distance, was what the knowing ones call “nuts” to Scrooge.

So that’s what Alexis Tsipras and other Greek ministers think of Greece’s creditors. Tsipras may particularly be thinking of Germany’s cranky finance minister Wolfgang Schäuble, who would undoubtedly be quite effective playing the part of Scrooge in a new production of A Christmas Carol.

In 1843, an elderly man like Scrooge would have been of the same generational archetype of today’s Silent Generation, the generation that grew up during World War II.

Scrooge would have grown up during the French Revolution and the Napoleonic Wars. Many people in Scrooge’s generation had died in wars or in poverty. Dickens talks about prisons, Union workhouses, the Treadmill and the Poor Law. London’s Panic of 1825 had been financially devastating.

In Dickens’ story, the three ghosts that visit him convince him to forget all that, and start being generous with his time and money. Tsipras is hoping the Schäuble and Europe’s other finance ministers turn out the same way. Charles Dickens, A Christmas Carol, 1843 edition (Gutenberg) and Kathimerini and Deutsche Welle and AFP

There’s no word about whether Greece’s Christmas card played any part in the European officials’ Christmas eve change of heart, but Dutch Finance Minister and Eurogroup President Jeroen Dijsselbloem said on Saturday that negotiations would restart for the debt bailout loan to be unfrozen in January.

The softening the Eurogroup’s hearts came about not because of visits by three ghosts, but because Greece’s finance minister Euclid Tsakalotos had sent a letter saying that the pension bonus was a one-time thing, and reaffirming the government’s commit to financial reforms. According to Eurogroup officials and Dijsselbloem:

We have received a letter by the Greek authorities in response to the concerns raised by the institutions as well as the Euro Working Group on the recently legislated fiscal measures.

We have been reassured by the accompanying assessment of the institutions indicating that their initial significant concerns, both on process and on substance, are alleviated by this letter as regards MoU commitments, especially regarding pension. …

I’m happy to conclude that we have cleared the way … to go ahead with the decision-making procedures for the short-term debt measures, which will be conducted in January.

As Scrooge said to Bob Cratchit:

A merry Christmas, Bob! A merrier Christmas, Bob, my good fellow, than I have given you, for many a year! I’ll raise your salary, and endeavor to assist your struggling family, and we will discuss your affairs this very afternoon, over a Christmas bowl of smoking bishop, Bob! Make up the fires, and buy another coal-scuttle before you dot another i, Bob Cratchit!

And so, as Tiny Tim observed, “God bless Us, Every One!” Reuters and Reuters