Trump may permit US military cooperation with Russia in Syria 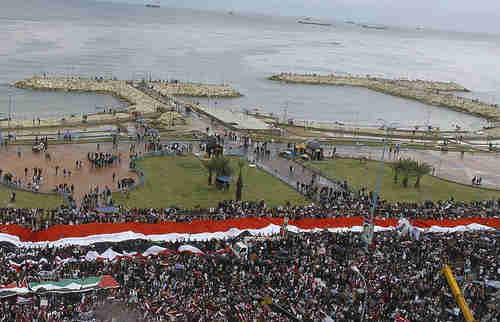 Port of Tartus, Syria, to become a major Russian naval base (Reuters)

The prize for bizarre story of the day on Monday had to do with whether the US and Russian militaries were cooperating in Syria to fight the so-called Islamic State (IS or ISIS or ISIL or Daesh).

According to Russian reports, US military intelligence was providing the Russia military with coordinates that Russian warplanes could use to strike ISIS targets.

However, soon after the Russian claims were made, American officials were calling them Russian disinformation, and an American military spokesman called the Russian statement “rubbish.”

Next, President Trump’s press secretary said that the US is willing to “work with any country that shares our interest in defeating ISIS,” including Russia.

The problem is that the Russians really don’t care much about ISIS, as their only interest is to keep Syria’s president Bashar al-Assad in power, while Trump’s only interest is in keeping his campaign pledge to destroy ISIS.

So it’s an interesting development that the door has been left open for the US and Russia to cooperate militarily in Syria.

However, it is true that Russia and Turkey have been coordinating air strikes against ISIS targets.

As readers are aware, Generational Dynamics predicts that the US, Iran and Russia will be allies in the coming Clash of Civilizations world war, and Turkey will not be an ally. AP and Russia Today and International Business Times

Russia will build major naval base in Tartus, Syria

For the first time in decades, Russia is coming back as a major military naval power in the Mideast, now that Russia and Syria have signed a long-term agreement to build a large naval base in Tartus, Syria, on the Mediterranean Sea. In addition, the agreement allows Russia to expand its Hmeymim airbase in Latakia in Syria.

According to the agreement, Russia can station up to 11 warships, including nuclear-powered warships, at Tartus. The facility will be completely controlled by Russia. It is immune from “search, requisition, arrest or executory measures” by Syrian officials.

According to Andrey Krasov, head of the State Duma’s Defense Committee, the only purpose of the naval base is to fight terrorism:

Russia needs this base to be present in this region. Unlike NATO, the Russian Federation is the guarantor of security in the world. In Syria, we fight against international terrorism not only by words, but also by deeds. Both Russian Aerospace Defense Forces and Russian Navy’s ship groups demonstrate their professionalism, high qualifications in supporting the Syrian Armed Forces in the fight against terrorism. We are doing everything possible in order for long-suffering Syria to be cleansed from this plague ― international terrorism.

When in the 1990s we did not hold any drills and closed our bases one by one ― in Cam Ranh (Vietnam), in Cuba ― no one cared about this, everybody was clapping their hands. And now, when we rose from our knees, when we started to actively train our forces – and we are doing this on our own territory – our defense-industrial companies produce the most modern weapons, and no other army in the world has such equipment and such weapons – this worries someone. We are worried, however, that NATO is approaching our borders. We do not get closer to anybody, but by these actions, we are returning the positions lost earlier, we are returning our presence in this region.

However, Krasov was contradicted by Igor Korotchenko, a Russian military expert, who says that the base will actually have a much larger purpose than just fighting terrorism: “It will make it possible for Russia to keep control of the entire Mediterranean region, i.e. the Middle East, North Africa and NATO’s southern borders. In terms of military strategy, it gives big possibilities for control over the most important geopolitical processes in the region… The mere fact of the presence of Russian warships and submarines, especially those armed with Kalibr cruise missiles, will make it possible to keep control of the entire region and repel any threats.” Deutsche Welle and Tass and Straits Times and Tass