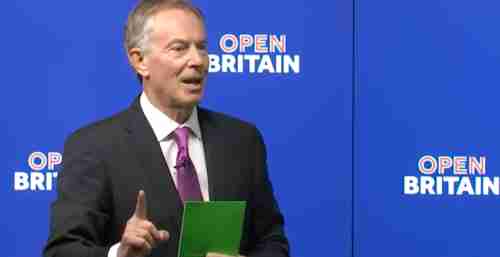 Britain’s former prime minister Tony Blair called for the people “to rise up in defense of what we believe – calmly, patiently, winning the argument by the force of argument; but without fear and with the conviction we act in the true interests of Britain,” to persuade the electorate to change their minds and decide that Britain should remain in the European Union after all.

Blair’s speech comes two weeks after Britain’s House of Commons voted overwhelmingly to authorize Prime Minister Theresa May to invoke “Article 50,” which means that the real negotiations will begin between Britain and the EU. According to the relevant treaty, Britain will officially leave the EU exactly two years after Article 50 is invoked. It is now expected that Article 50 will be invoked early in March.

Blair is an extremely controversial figure, even though he won three elections and was Prime Minister for a decade. The people on the right hate him because he’s in the Labor Party. The people in the Labor Party hate him because he defended Britain’s participation in the Iraq war. So I suppose he reasoned that when you’re hated that much, then you really have nothing to lose by taking an unpopular stand on an issue.

Blair is concerned that the far right is so dominating the Brexit issue that millions of people who are against Brexit have no way to articulate their feelings:

They will claim we’re dividing the country by making the case. It is they who divide our country – generation from generation, North from South, Scotland from England, those born here from those who came to our country precisely because of what they thought it stood for and what they admired.

Blair is referring to the fact that younger generations, who voted against Brexit, believe that they are being left without a future because of the selfish pro-Brexit vote of the older generations. He refers to the fact that while England and Wales voted for Brexit, Scotland and Northern Ireland voted against it, and they’re being forced out of the EU against their will. And of course the last sentence refers to the bitter immigration issue.

Boris Johnson, one of the leaders of the pro-Brexit campaign, and current Britain’s Foreign Secretary, was his usual colorful self in responding to Blair. He said:

This is a discussion we had most of last year and it came out very firmly in favor of leaving the EU.

We heard all these arguments last year – not a thing has changed – and I think it really is insulting the intelligence of the electorate to say that they got it wrong.

He called Tony Blair the “Remoaner-in-chief” (playing on the word “remain”), and said that people should turn off the TV when Blair appears. Tony Blair’s speech – transcript and Daily Mail (London) and Telegraph (London)

Of the four nations in the United Kingdom, England and Wales voted in favor of Brexit, while Scotland and Northern Ireland opposed it. People and politicians in both regions are furious that they’re being forced to leave the European Union against their will.

On September 18, 2014, Scotland held a referendum on the question of whether Scotland should leave the UK and become an independent country. This would have dissolved the 1707 union between England and Scotland that came out of the War of the Spanish Succession. Voters rejected the referendum, with 55.3% voting no. Many in Scotland are bitter that they are going to be forced to leave the European Union even though they voted 62% against Brexit.

In his speech, Tony Blair said that Scotland’s demands for independence from Britain are “more credible” because of Brexit, and that a new referendum was “back on the table.”

Nicola Sturgeon, First Minister of Scotland, and leader of Scotland’s pro-independence movement has always been a bitter political enemy of Tony Blair, but on this issue, she says, “There’s a quality of analysis & argument in Blair’s speech today that has been totally lacking from Labor to date.” She added:

The argument is now very different than it was in 2014 and is even more compelling than it was in 2014. Because what Brexit has shown is that within the UK Scotland’s voice isn’t listened to and doesn’t appear to count for much, so the argument for taking control, taking charge of our own society and our place in the world becomes ever more strong.

However, several Scottish ministers disagreed with Sturgeon, saying that only about 25% of the people of Scotland want a new referendum. Scottish politician Willie Rennie said:

The case for independence is weaker, not stronger, now, especially with the pounds 15 billion black hole in the Scottish public finances that would hit our NHS and schools.

Ireland has a long bitter history of religious and factional wars, and it’s only in recent years that the border between Ireland and Northern Ireland has been open for free travel of people and goods. So many people are opposed to the idea of jeopardizing the open border and, as in the case of Scotland, are furious that London is making decisions that will deeply affect the lives of the Irish.

Enda Kenny, the prime minister of the Republic of Ireland, said that avoiding a “hard border” is essential for the people on the entire island.

[L]et me be absolutely clear on one point. It is a matter of vital national interest for Ireland that we do not return to the days of a hard border that we knew only too well. Or indeed create a new one in the future.

The European Union has always been about removing barriers, about bringing people together in peace and prosperity. The treaty of Rome, which we will celebrate on its 60th anniversary next month, is one of the greatest peace agreements in history. Without it, there could have been no Good Friday Agreement.

Unfortunately, Kenny and the other Irish politicians will have little to say about it. An open border would permit anyone to migrate from Europe to the UK simply by passing through Ireland. Similarly, goods could be transferred from Europe to the UK by traveling across the border between Ireland and Northern Ireland. With most UK and EU politicians deeply nationalistic and deeply angry with each other, there may be little charity available for the Irish people, who have already learned that their wishes carry little weight in London. Telegraph (London) and Guardian (London)