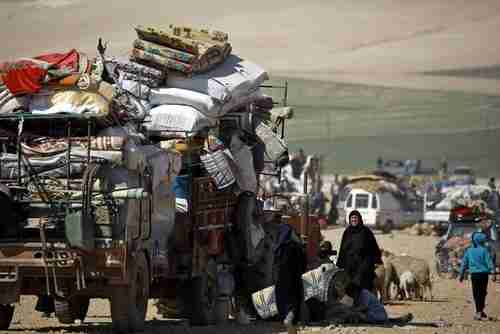 The Pentagon is deploying about 400 Marines and Army Rangers to Syria to assist in the fight against the so-called Islamic State (IS or ISIS or ISIL or Daesh).

Soldiers from the 75th Army Ranger Regiment are deployed in the city of Manbij. Manbij is currently under the control of the Kurdish People’s Protection Units (YPG) militia, which is an ally of both the US and Russia, but whom Turkey’s government considers to be terrorists aligned with Turkey’s terrorist Kurdistan Workers’ Party (PKK). Turkey has vowed to attack Manbij and eject the Kurds. So the American troops are in Manbij to act as a buffer between the Turks and the Kurds, and to prevent them from fighting each other.

Both Russian and Syrian forces are also being deployed to Manbij. Although the US and Russia have held talks to coordinate their forces, the contents of any of the agreements reached remain unknown, as does how the forces will interact with each other.

Forces from the 11th Marine Expeditionary Unit are being deployed to the city of Raqqa, which is considered to be the capital city of ISIS. According to the Pentagon, local forces will do the actual fighting, while the American troops will provide artillery support:

A U.S. Marine Corps artillery unit deployed to provide the Coalition greater agility to enable and expedite our Syrian partnered forces defeat of ISIS in Raqqa. The strategy adopted by the Coalition remains the same – we will continue to work by, with and through partnered forces to defeat ISIS in Iraq and Syria. Our partners in Syria face an entrenched foe and like the Iraqis will require additional support to enable them to fight and defeat ISIS in Raqqa. The deployment of these additional key enabling capabilities allows the coalition to provide flexible all-weather fire support to our Syrian partners when they need it most.

These deployments are raising concerns that the US is becoming more deeply involved in the war in Syria. The Obama administration had a policy, in both Iraq and Syria, of minimal involvement, while supporting local forces with airstrikes and artillery. This new deployment continues that policy, but concerns are growing that the number of troops deployed will continue to increase.

Robert Ford, the Obama administration’s last ambassador to Syria until 2014, says that these deployments are “fraught with risk.” According to Ford, “That’s not a small policy change. It is a huge policy change. We have never in our Syrian policy ever put U.S. personnel in between warring Syrian factions or to maintain a local cease-fire.”

The number of U.S. troops now authorized to be in Syria is capped at 503, though that amount does not include the 400 Marines and Army Rangers because they are on a temporary deployment.

Other reports indicate that the U.S. is preparing for a larger deployment of troops in Syria. Close to 1,000 troops will be sent to Kuwait in order to be available for quick deployment to Syria if necessary. Stars and Stripes and US Naval Institute and Washington Post and Press TV (Tehran)

As more US troops enter Syria, the endgame becomes fuzzier

We now have American, Russian, al-Assad regime, Free Syrian Army (FSA) Sunni insurgent, Turkish, Kurdish YPG, Iranian and Lebanese Hezbollah soldiers all fighting in Syria. These forces are all united in their fight against their common enemy, ISIS, with absolutely no clarity whatsoever about what will happen if and when ISIS is defeated.

Furthermore, while the al-Assad regime still controls an area in western Syria along the Mediterranean coast, there are still large regions controlled by Sunni insurgents. Furthermore, the Kurdish YPG controls a large strip, almost 100 miles deep, along the entire northern border with Syria – except for a small region still controlled by Turkish forces and FSA insurgents.

The Kurds would like to control the entire northern border with Turkey and form an independent state called Rojava. The Turks are bitterly opposed to this, and will not give up the small region they control along the border. Bashar al-Assad will never tolerate even peaceful opposition from the Sunni insurgents. The Sunni insurgents will never stop fighting as long as Bashar al-Assad is president. Iran will not tolerate anyone else as president. Russia couldn’t care less who’s president, as long as they’re controlling Syria. Iran will not tolerate Russia controlling Syria.

Those are all “big picture” issues. Even the current “small picture” issues are unresolved. There are Kurdish, Russian, American and Turkish in or around Manbij, all with different agendas. Who will end up controlling the city?

And who is going to be fighting ISIS in Raqqa? The US considers the YPG Kurds to be the best and most reliable force fighting ISIS, but Kurdish control of Raqqa will be intolerable to both Turkey and the al-Assad regime.

There actually is a kind of precedent in the fight to recapture Mosul, Iraq from ISIS. The Iraqi army is entering the city from the east and doing the fighting. The Kurds are blocking ISIS from fleeing to the north. The Iran-backed Shia militias are blocking ISIS from fleeing to the west or south. They seem to have coordinated the attack, at least for the time being.

So in Syria, it’s a little different. Apparently, the Russians and the Kurds are joining forces in Raqqa, backed by American artillery. The battle hasn’t yet begun, so we won’t know for a while whether this will work.

So we have two “small picture” issues and a dozen “big picture” issues. Up until the last couple of months, all of these forces were able to keep separate. The al-Assad regime was fighting in Aleppo, Turkey was fighting in northern Syria, Russia and the US-led coalition were coordinating airstrikes. But those simple solutions are no longer possible.

I read many media sources from many countries every day, and I have not read any article or analysis or white paper that convinces me that anyone has the vaguest clue what’s going to happen in the endgame, if and when ISIS is defeated.

And this is why many people are concerned about the new deployment of American forces to Manbij and Raqqa. The concern is that once ISIS is defeated, all these forces will start fighting each other, and US troops will be drawn in and be part of a major new war.

As I’ve been writing for many years, Generational Dynamics predicts that the Mideast is headed for a major regional war, pitting Jews against Arabs, Sunnis against Shias, and various ethnic groups against each other. We may be seeing the start of that major regional war in Manbij and Raqqa. Gulf News and Hurriyet (Ankara) and Arab News and The National (UAE) and Guardian (London)