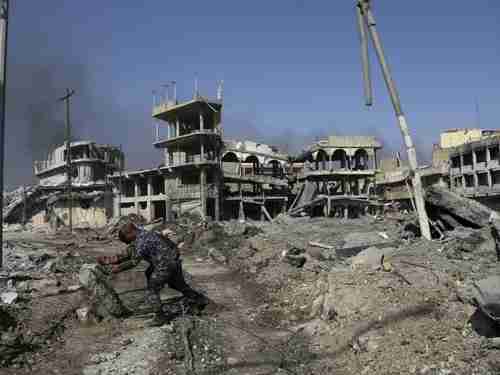 Iraq’s government forces continue to make territorial gains in west Mosul as they continue to battle to flush fighters from the so-called Islamic State (IS or ISIS or ISIL or Daesh) out of their last urban stronghold in Iraq. West Mosul is the densely populated portion of the city located on the west bank of the Tigris River, which divides the city.

Iraq army began its Mosul offensive in October, with support from US artillery. The fight to eject ISIS from east Mosul has already been mostly completed.

Mosul had an estimated population of two million before ISIS took it over in June 2014 in a lightning assault. Since then, many Iraqis have fled, but somewhere between 750,000 and one million are thought to remain in west Mosul. Many of these people are trapped in west Mosul, because ISIS is shooting and killing any families that try to leave.

Unlike east Mosul, the streets in west Mosul are too narrow for armored vehicles, and any use of heavy weapons puts civilian lives in danger. So extremely bloody house to house fighting is required, with many homes booby-trapped with bombs by ISIS.

More than 180,000 people have already fled west Mosul. About 111,000 have sought shelter in refugee camps. The government says that it can accommodate a further 100,000 displaced people in camps.

However, the UN is saying that the numbers could rise far above that, and could overwhelm the UN’s humanitarian agencies. According to the UN’s Office for the Coordination of Humanitarian Affairs: “Humanitarian agencies are bracing for the possibility that an additional 300,000-320,000 civilians may flee in coming weeks.”

According to Lise Grande, the UN Humanitarian Coordinator for Iraq: “We have been preparing for the Mosul operation for months, but the magnitude of the crisis has exceeded our expectations, but we will do our best to ensure that people are helped.

Grande says that the situation in east Mosul was different:

If the number of people leaving the city increases faster than we can construct new plots, the situation could deteriorate very quickly.

Analysts expect the fighting in Mosul to last a few more weeks, if not months. Middle East Monitor and AFP and Euro News and Gulf Times

The American-led coalition that fought the Iraq war in the early 2000s was blamed and continues to be blamed for the crisis that followed the war, which was attributed to inadequate planning. Fears are increasing that the same problem will occur after ISIS is defeated in Iraq.

Australian analysts are expressing the fear that ISIS jihadists will go back to their home countries or to other countries and continue the fight there. According to Greg Barton, professor of Global Islamic Politics at Deakin University:

We’re looking at a very grim future for the Middle East. If the government of Iraq can get its act together, they have half a chance of making things better, but we have every reason to worry that won’t be the case.

“We may well see ISIS forces coming back as we’ve seen Taliban forces in Afghanistan. We’ve been constantly underestimating strength and capacity, I think we’ll be repeating that error again and again.

Canada has been supporting the Kurdish peshmerga forces in Iraq with training, weapons, and equipment, and now face the possibility that this support will backfire on Canada.

With Canadian support, the Iraqi Kurds have taken control with land regions during the fight to eject ISIS from Mosul, and they are not going to be willing to give them back. In November 2015, Canada’s prime minister Justin Trudeau was warned about the potential long-term consequences of supporting the Kurds:

Should the (ISIS) threat recede, Baghdad will have to contend with a range of land disputes with the (Kurdish regional government), as well as strengthened Iraqi Kurdish forces, which have received training and equipment from coalition members, including Canada.

Three months later, the government announced it would triple the number of Canadian military trainers in northern Iraq and provide weapons to the Kurds.

Many in Canada are watching to see whether the Kurds plan to demand independence from the rest of Iraq, as their leaders have promised. This would lead to a major political crisis in Iraq, and possibly another war.

Furthermore, it will cause political chaos in Canada as well. It will be used as an argument for activists in Canada’s own sovereigntist movement (Mouvement souverainiste du Québec), which is demanding independence for the province of Quebec. News.com (Australia) and CTV (Canada)