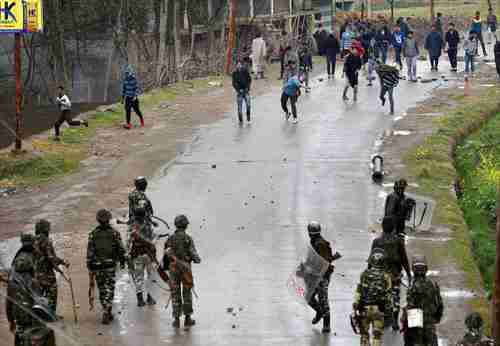 On Wednesday, in the district of Budgam in India-controlled Kashmir, Indian security forces raided the home of an anti-government militant Tauseef Ahmad Wagay who had allegedly been responsible for inciting violence against police. According to India media reports, villagers began obstructing the police and pelting them with stones, in order to allow the militants in the home to escape. In the end, three stone pelters were killed by police gunfire, along with the militant. Dozens of police personnel were injured.

On Friday, after Friday prayers, clashes erupted between government forces and stone-throwing villagers in several towns across Kashmir, to protest the shooting deaths on Wednesday.

Stone-throwing incidents have occurred occasionally in the past, but became frequent after July 8 of last year, when Burhan Wani, the leader of the Kashmir separatist group Hizbul Mujahideen, was killed by Indian police fire. Massive riots in Kashmir began the next day. Indian police responded with rubber bullets, leaving many protesters wounded or killed or blinded by the pellets, and that kind of violence has been an almost daily occurrence since then. After hundreds of people had been blinded by the pellets, the police were convinced to stop using them. By this time winter was approaching, and the protests died down.

But now that the weather is getting warmer again, the protests are growing again, and they may become massive by the end of the summer. At any rate, there’s certainly no reason to expect them to die off.

India’s Home Minister Rajnath Singh gave a delusional speech on Friday, saying that the increasing protests are occurring because they’re being encouraged by Pakistan-based sources, using social media applications like Whatsapp and Facebook:

I want to inform the House, and we should be proud of it Deputy Chairman, that the way the terrorists should be responded to, our soldiers are giving them reply in the same way, in the same language.

A new trend has started in the last few months. Deputy speaker, the trend is this that whenever our soldiers start an operation, some youth from the villages come and start pelting stones on the security forces. But I believe, that our Kashmiri youth, who do stone pelting, are being misled by some Pak-sponsored sources.

I want to appeal to the youth of Kashmir to please don’t get misled by Pakistan, they are regularly trying to destabilise India. I also want to inform the House that this crowd (of stone pelters) are assembled by some Pakistan-based groups with the help of social media applications like Whatsapp and Facebook. All of these are used. I want to say it again that the groups, which use social media for this, are based in Pakistan only.

I also want to say, as far as terrorism is concerned, the way terrorism should be responded to, our soldiers are dealing with them in the same way and they will keep doing that in future also. And I want to say that will definitely become successful.

There are a couple of things to note about the above statement.

First, there is a note of revenge in the speech with such phrases as, “our soldiers are giving them reply in the same way, in the same language.” The desire for revenge is quite understandable under the circumstances, but it’s not going to end the violence and, in fact, it will only invite tit-for-tat increases in violence.

Second, Singh blames Pakistan-based groups using social media for inciting the stone-throwers. It’s quite possible that Pakistan-based groups are using social media to incite stone-throwers, but in no way does that explain the large protests. Al-Qaeda and ISIS-linked groups have been trying to incite jihadist violence in the United States for years, but outside of a few “lone wolf” attacks, we’ve had no large similar protests, even where there are large Muslim communities in Detroit and Minneapolis. Blaming social media for what’s happening is totally delusional.

Third, Singh says, “And I want to say that will definitely become successful.” Once again, this is totally delusional.

What seems most likely to happen is that violence will increase on both sides this summer, and may spiral into something slightly bigger or much bigger. First Post (India) and Financial Express (India)

Separately on Friday, Amir Wagay, the current top commander of Hizbul Mujahideen, was arrested on Friday, along with some arms and ammunition, according to police reports. He was involved in numerous attacks on security forces, and was high on the “wanted” list.

Burhan Wani, who was shot by police on July 8 of last year, triggering months of violent protests, was the commander of Hizbul Mujahideen at that time. Hindustan Times

From the point of view of Generational Dynamics, the growing violence in Kashmir is following a fairly standard historical template that always ends in a major war. I’ve written in the past to distinguish between “organic” genocides that come from the people, such as the 1994 Rwanda genocide, versus “government-led” genocides, such as occurring today in Syria and South Sudan.

Although there is little doubt that Pakistan-based groups are inciting violence in Kashmir, that is not enough to start a generational war unless the mood of the population is that such a war is necessary. As I mentioned above, there are jihadists groups inciting Muslims in America to violence, but they’re having almost no success. But what we’re seeing in Kashmir is an “organic” war that’s leading unstoppably to a generational crisis war.

The 1857 rebellion is also called India’s First War of Independence from the British colonial power. What started out as protests related to the Hindu veneration of cows grew into an extremely bloody generational crisis war, resulting in the deaths of over 100,000 Indian civilians.

India remained a British colony, and there was little or no violence for decades, as always happens after a generational crisis war, since the traumatized survivors do not wish anything so horrible to happen again. However, as younger generations with no personal memory of the war rise to power, conflicts begin again.

In the 1910s, Mahatma Gandhi, the Indian peace activist, launched a “non-cooperation movement” against the British, involving civil disobedience. The generational Awakening era climax occurred on April 10-12, 1919, with the Jalianvala Bagh Massacre (Amritsar Massacre), when British troops opened fire on 10,000 Sikhs holding a protest meeting, killing hundreds. That event convinced both the British and the Indians that Britain should completely give up control of India.

By 1946, there was a debate centered on two choices: Should there be a single Indian state, with separate regions under the control of Muslims and Hindus, or should there be a two-state solution, a Muslim state living side-by-side in peace with a Hindu state? The argument that won the day was that Muslims cannot stand pigs and Hindus cannot eat cows, and so they cannot live together. Finally, British, Muslim and Hindu officials all agreed that there had to be two separate states, India and Pakistan. In particular, the 1857 rebellion was still in everyone’s mind, and it was hoped that the two-state solution would lead to peace.

There is an old saying that “History doesn’t repeat itself, but it rhymes.” In 1947, the Indian subcontinent was partitioned into two countries, India and Pakistan, and no sooner did that happen then there was a massive new generational crisis war. But with the British colonists gone, this war pitted the Hindus against Muslims, in one of the bloodiest wars of the 20th century.

Once again, there was relative peace following the war, but once again, younger generations have been rising, and have no fear of a new war. The accusation that Pakistan-based groups are using social media to incite violence is undoubtedly true, but India media are no better.

Here’s an excerpt from an opinion piece from right-of-center Indian media:

It is good that the Army Chief has made good his promise that those aiding terrorists will be dealt with like terrorists themselves, but there are discordant notes being struck by politicians who still think talks can sort out the situation. […]

It is silly to expect that talks with Pakistan or Kashmiri separatists will somehow bring peace to the Valley. It won’t. The only way peace will come is when the security forces wear down the jihadis and Pakistan-backed terrorists over years, and the local population realizes that they have no alternative but to be a part of secular India. There is not going to be any instant nirvana in this deadly game.

The person who wrote has absolutely no clue what he is talking about when he writes, “The only way peace will come is when the security forces wear down the jihadis and Pakistan-backed terrorists.” That is not what happens in a generational Crisis era. The security forces will only enrage the separatist youth, and tit-for-tat escalations will soon lead to a full-scale war that will spread and engulf both Pakistan and India. That is the way that the world works.