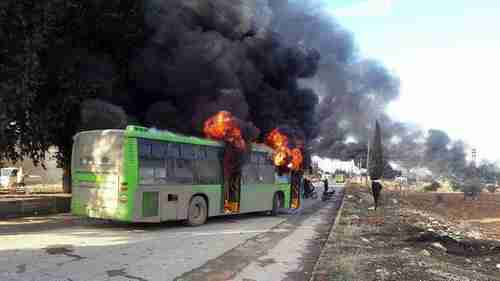 A bus burning during the attack. The passengers were still in their seats as the bus burned. (ARA News)

On Saturday, a suicide bomber approached a group of buses carrying thousands of supporters of Syria’s president Bashar al-Assad. He was in a car supposedly carrying food aid to be delivered to the people in the buses. The driver of the car started passing out crisps (potato chips) to children, and when a group of children had gathered around him and his car, he exploded the car bomb. The massive explosion killed over 100, and injured hundreds more.

The buses were evacuating about 5,000 Shia supporters of Shia/Alawite al-Assad from villages near Aleppo under control of the Sunni opposition, to bring them to an area under control of al-Assad’s government.

This complex arrangement of simultaneous evacuations had been stalled for months due to disagreements among various factions as to who would be evacuated. Finally, the buses had all been loaded up and ready to go on Friday, but there were additional delays, and the buses were not permitted to move, making them static targets. After the passengers had been waiting in the buses for about 30 hours, the suicide bomber struck.

Once the explosion had occurred, a decision was made to allow the remaining buses to leave immediately, so that they would no longer be static targets of possible additional attackers.

No one has taken credit for the explosion, but it’s assumed that the perpetrators are from the Sunni opposition groups, such as the al-Qaeda linked Jabhat al-Nusra (al-Nusra Front, now Jabhat Fateh al-Sham or JFS), or the so-called Islamic State (IS or ISIS or ISIL or Daesh).

There are thought to be two possible motives for the attack.

First, it is possible that it was a revenge attack in response to last week’s horrific Sarin gas attack by Syria’s president Bashar al-Assad on the town of Khan Sheikhoun in Idlib province, killing up to 100 people. Al-Assad’s Sarin attack has infuriated Sunnis throughout the Mideast and prompted calls for revenge.

A second possible motive is to express opposition to the so-called peace agreement. The farcical agreement was reached by Russia, Iran, and Turkey, meeting in Astana, the capital city of Kazakhstan, in January, but it was considered a joke by many because it did not include any parties who are nominally the opponents in Syria’s civil war — the Bashar al-Assad regime or the Sunni opposition militias. So it’s possible that the Sunni opposition perpetrated Saturday’s explosion in order to undermine the so-called peace agreement.

Last year, as Bashar al-Assad’s warplanes were dropping barrel bombs loaded with explosives, metal and chlorine gas on marketplaces, hospitals, schools and homes in Aleppo, al-Assad issued a delusional statement saying that the destruction of Aleppo would be a victory that would be remembered throughout history, and that it would end the war, since the jihadists would no longer have any reason to continue fighting. We’re all still waiting for the war to end and the jihadists to go home. ARA News (Syria) and AP and Reuters (14-Apr)

Last week’s Sarin gas attack by the Bashar al-Assad regime was just the latest atrocity in his years of torture, enforced disappearances, siege warfare and indiscriminate bombing of civilian neighborhoods and hospitals.

A lengthy analysis by the New York Times calls the amount of evidence of al-Assad’s war crimes “staggering,” but al-Assad continues committing war crimes with impunity. According to the article:

Three tons of captured Syrian government documents, providing a chilling and extensive catalog of the state’s war crimes, are held by a single organization in Europe. A Syrian police photographer fled with pictures of more than 6,000 dead at the hands of the state, many of them tortured. The smartphone alone has broken war’s barriers: Records of crimes are now so graphic, so immediate, so overwhelming.

Yet six years since the war began, this mountain of documentation — more perhaps than in any conflict before it — has brought little justice. The people behind the violence remain free, and there is no clear path to bring the bulk of the evidence before any court, anywhere.

More than 400,000 people have been killed in the Syrian war. Half the country’s population has been displaced. Syrian human rights groups list more than 100,000 people as missing, either detained or killed. Tens of thousands languish in government custody, where torture, deprivation, filth and overcrowding are so severe that a United Nations commission said they amounted to “extermination,” a crime against humanity. …

Since this month’s chemical attack, residents have reported several attacks with incendiary weapons in Idlib and neighboring Hama provinces, uploading videos that show blinding fires typical of weapons like thermite and white phosphorus. They cause severe burns, similar to napalm, and their use is prohibited in civilian areas. …

A Syrian man who did four stints of detention and torture for taking humanitarian aid to wounded protesters and rebels recounted his experiences, but then expressed despair that anything would come of it.

“Countries don’t need this evidence — they already know what’s happening… We are just pawns on a chessboard. I have women friends who were detained, raped, got pregnant, were tortured with acid… There is no justice. And because there is no justice, there is no hope.

This week, the Russians and Syrians began their usual disinformation campaign, claiming that black is white or that there’s no evidence that the al-Assad regime was responsible.

The clearest example of how this works occurred after the MH17 passenger plane was shot down over eastern Ukraine by a Russian Buk missile. There was a two-year investigation by a Dutch team that included investigators from Australia, Malaysia, Ukraine, and Belgium. They collected tens of thousands of pieces of evidence, including forensic examinations, witness statements, satellite images, radar data and intercepted telephone calls. Their conclusion was that there is absolutely no doubt that the passenger plane was shot down by a Russian Buk missile shot from by Russians. But the Russians just say it’s all manufactured data, as if it were even possible to manufacture that much evidence.

Similarly, there are thousands of pieces of evidence, including forensic collections and analyses, photos, videos, eyewitness testimony, doctors’ testimony, the UNSC report, analyses of the UNSC report, and so forth, proving al-Assad’s repeated use of chemical weapons, including Sarin gas, chlorine gas, ammonia and phosphorus, and that he used them on hospitals, schools and markets with no military objective except to kill as many innocent women and children as possible.

So I saw Bashar al-Assad interviewed by the AFP on television last week. The guy is a total sleazebag, but I watched as much of the interview as I could stand. He said he has no chemical weapons. Well, that is exactly what he said after his Sarin gas attack in 2013. In that case, he ended up agreeing to let the Americans take control of and destroy 1,300 tonnes of his chemical weapons that he had said he didn’t have.

It is almost unbelievable how much destruction al-Assad has caused. Thanks to al-Assad, Putin and Khamenei, there are about 50,000 jihadist fighters from 86 countries that have come to Syria, first to join the rebels fighting al-Assad, then to join the al-Qaeda linked Jabhat al-Nusra (al-Nusra Front, now Jabhat Fateh al-Sham or JFS), and the so-called Islamic State (IS or ISIS or ISIL or Daesh). Al-Assad has created the al-Nusra front and ISIS. He’s created millions of refugees that have flooded into neighboring countries, and over a million have poured into Europe.

It is now clear to al-Assad that nobody is going to stop him, and he can continue committing genocide as long as he wants, with impunity. Al-Assad is the worst war criminal so far in the 21st century, and nobody is even going to try to stop him. That’s the way the world works. And people wonder why we have world wars.

The worst people in the world are the leaders that order their armies to commit genocide, war crimes, atrocities, and crimes against humanity – people like Adolf Hitler, Mao Zedong, Pol Pot, Robert Mugabe, Josef Stalin, and Bashar al-Assad.

Right behind them, in second place, are people like the people who support al-Assad — the deniers, the collaborators, the acolytes and the trolls — the people who defend the war criminals and make the actions of Hitler, Mao, Stalin and al-Assad possible. These are the people that make genocide and war crimes possible, and they are as much to blame as the war criminals themselves. NY Times and Telegraph (London) and Salon